In Yemen, war, bad management and climate change are at fault for water shortage 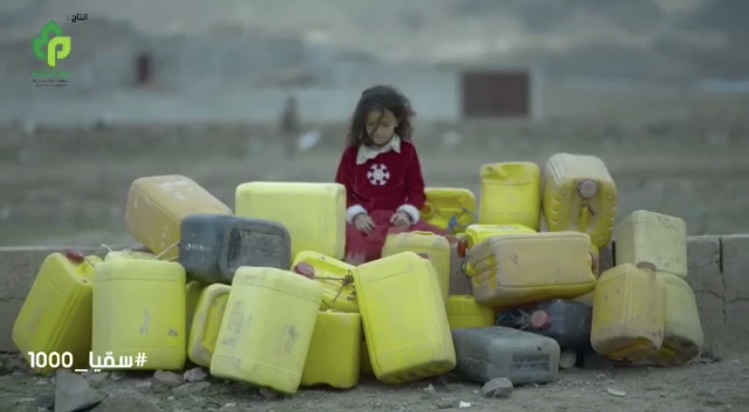 Screenshot of a little girl surrounded by empty containers, taken from a video by Positive Yemen.

Yemen, the stage of one of the worst humanitarian crises in the world, is facing a severe water crisis: 16 million people lack access to clean water in the country, according to UNICEF.

“What is worse than not having the most basic human right, water?” asks Shoushou, a young activist from the capital Sana'a, in a conversation with Global Voices.

Sana’a is among the 10 most water-scarce cities in the world and is at the risk of running dry in a few years. Yemenis use 95 percent less water than the average resident of the United States.

Three years of war undoubtedly affected water sources as reservoirs and pipelines were regularly targeted. In February 2016, there were reports that Saudi planes had bombed and destroyed a reservoir that supplied drinking water for 30,000 Yemenis. This was shortly after a bombing of a major desalination plant in the city of Mokha, also allegedly by the Saudi-led coalition.

However, poor management also helps explain the deteriorating situation. Drilling for limited groundwater has long been the norm for the Yemeni government and it's unlikely that authorities will implement more sustainable strategies as the war rages on.

“I blame the government for not managing and supervising the water crisis. No one cares about the people,” Shoushou tells Global Voices.

While groundwater is drastically depleted, Yemen’s climate seems to be getting drier. In 2009, the UN Food and Agriculture Agency (FAO) forecasted that Yemen could be the first county in the world to exhaust the entirety of its groundwater resources.

Water is already very expensive in the country, with ordinary citizens paying over 30 percent of their income just to have water supplied to their houses. It's the highest rate in the world.

As the crisis deepens, combatants treat the resource as a weapon. Both the Houthi and Saudi-backed forces have repeatedly blocked deliveries of humanitarian aid consisting of food and water, leaving many Yemenis with no choice but to store as much water as they can, most of the time in unsanitary conditions.

Fetching water is also a challenge in Yemen. The responsibility of collecting water, when sources are located far from human settlements, tends to fall upon women and girls. The long journey leaves them exposed to sexual harassment. They are at risk of drowning in open water reservoirs or of suffering miscarriages caused by carrying heavy containers.

Young girls who are unable to carry heavy lifts often have to make more than one trip. The mission can take the whole day, making them miss school.

The inadequate water storage has led to an epidemic of cholera in Yemen, the largest and fastest-spreading epidemic on record. More than 1.1 million suspected cholera cases recorded since April 2017 with over 2,300 associated deaths.

One in 62 Yemenis is suspected of having Cholera. A lot of them are children under the age of seven. Hospitals reportedly receive around 60 to 70 suspected cases each day.

The World Health Organization is warning that a third wave of cholera is possible after two major waves in recent years.

Fortunately, treating Cholera is relatively easy, with a combination of antibiotics and intravenous fluids usually being enough to reverse even severe cases. But treatment must begin shortly after symptoms show up, or else it can be fatal.

Poor access to healthcare poses a challenge to treatment: in 2017, nearly 17 million people in Yemen did not have access to basic health services. Only 45 percent of the country's health facilities are currently operating.

Despite the efforts of international human rights programs like UNICEF and WHO, this scarcity is leaving many Yemenis untreated. The airstrikes in August 2018 did not only kill a dozen Yemenis. It also damaged Al Thawra Hospital in Hudaydah.

Extension of condolences to the people of #Yemen for the attack on Al-Thawra Hospital in #Hudaydah, initial estimates on casualties and injuries are 14 deaths and 30 injuries (these numbers are subject to increase as the situation evolves).

The hospital averages around 50,000 consultations a month and is a major center for cholera treatment. After the attack, the cholera cases in Hodeidah rose by almost a third.

Project #سقيا_1000‬⁩ aims to provide free water for those in most need. Launched in November 2017, it aims to fill 1000 tanks of water in the capital Sana'a and its environs. They reached their goal in February 2018. The project currently benefits 6,194 families or 39,789 individuals.

The activists also install new reservoirs and provide periodical cleaning and maintenance to new and existing tanks. So far, they have installed 14 new tanks, while filling 74 and helping maintain 21 existing tanks. The whole project is based on donations from people in Yemen and abroad. It is their only source of funds.

The project started on social media. We got the support of people from inside and outside Yemen. Their support was the main reason we were able to succeed.  We did not receive support from any political party. Alhamdulillah, we reached our goal in February 2018. After that, the movement turned into a project that regularly ensures reservoirs are filled. In the first half of this year, the project was working perfectly and according to the plan. But recently there’s a lack of support, and the shortage is increasing day by day. Therefore we seek alternative sources from traders or donors to support the project.