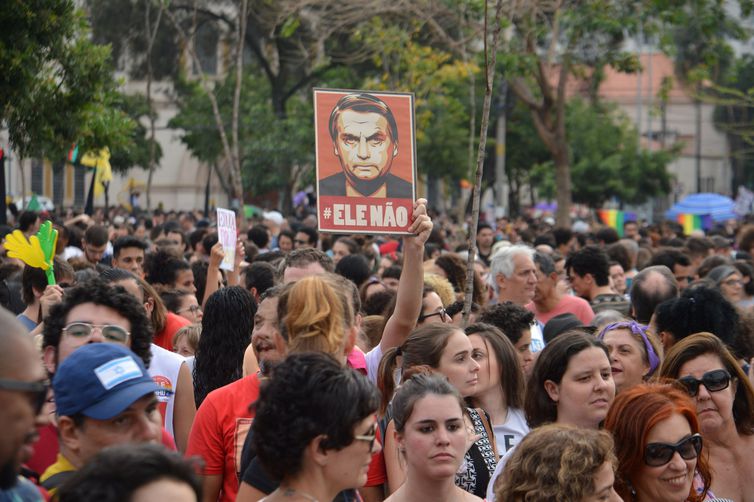 Tensions are rising in Brazil as citizens prepare to vote for president, state governors, state assemblies and the National Congress in elections on October 7, 2018.

According to the latest results from Datafolha Institute, Bolsonaro has 28 percent of projected votes, followed by the Workers’ Party nominee, Fernando Haddad, with 22 percent. However, Bolsonaro has the largest margin of rejection: an estimated 46 percent of Brazilians say they would never vote for him. Among women, who represent more than half of the 147 million voters, it reaches 52 percent.

And women are the loudest voices in the #NotHim movement against Bolsonaro, a candidate who openly espouses misogynist and homophobic rhetoric. The video below shows thousands at national protests across Brazil:

Protests were called in mid-September after Women Against Bolsonaro, an all-female group one-million strong on Facebook, was hacked and attacked. All the administrators were blocked and the group's name was changed to show support for Bolsonaro.

Women Against Bolsonaro was receiving at least 10 thousand newcomers every minute, according to UOL news outlet.

Malini illustrated the “explosion” of reactions of 270,833 profiles generating 1,011,560 retweets in the graphic below:

The network shows 270,833 profiles generating 1,011,560 RTs. An explosion of influencers, creating a multiple, colorful and global network. Brown netowrk: profiles against the movement (9%)

Demonstrations supporting Bolsonaro were held the following day on Sunday, September 30. In an interview from the hospital, where Bolsonaro has stayed since he was stabbed during a rally at the beginning of September, Bolsonaro promised he “will only accept his victory as per the elections results.”

Bolsonaro is openly outspoken against gender equality and women's rights. In 2014, Bolsonaro suggested he would never rape politician Maria do Rosario “because she was too ugly” and “didn't deserve it.” That same year, talking to a local newspaper, he defended employers by saying they should not be forced to pay equal wages to men and women. In 2016, Bolsonaro voted to impeach Dilma Rousseff, the first female president of Brazil.

Bolsonaro has also made a series of anti-gay statements such as “I wouldn’t be able to love a gay son.”

During the 2018 campaign, he tried to clean up his image by launching a video with his daughter, claiming she “changed his life”. But citizens remember when he referred to her birth as a “weak moment” and protestors held up posters asking: “With how many weakness can you make a revolution?”

This poster has a huge impact. It gave me chills.

“His ideas are bad for most people”

The #NotHim movement has attracted support from a wide spectrum of groups. Brazilian football fans published a series of manifestos including Corinthians Gaviões da Fiel, one of the largest and oldest football clubs, the first to take a stand:

Today, with more than 112,000 associates, we understand that there are different ways of thinking and take a stand in a democratic society. We respect the plurality of ideas, since it is the essence of the democracy for which our founders fought for. We cannot, however, ever agree with whoever position themselves against the basic values of a Democratic State of Law.

The movement has also attracted international support from celebrities like Madonna and Cher, with a shout out from the official account of Time’s Up, a global women's advocacy movement:

To our sisters in Brazil: We are all in this together. We see you and hear you. We are with you. #elenão #nothim https://t.co/6WfVSnfpME

Brazilian Maria Soares, among the thousands who marched in Rio de Janeiro on Saturday, explained her reasons for protesting:

Mrs Maria Soares always fighting and showing us that resistence does not depend on your age!

His ideas are bad for most people. The only ones who can vote for Bolsonaro are the selfish, the homophobic, the racist, the inhumane people. My biggest concern it's not Bolsonaro himself, but the people who will vote for him. I don’t know what they want for the world.

Anthropologist Rosana Pinheiro-Machado and writer Joanna Burigo examined why #NotHim became something more than a hashtag:

If none of this reverts to electoral gain, still there aren't any reasons to think different or to find another way of manifesting our indignation. This fight — that includes hashtags, memes, but not only that, since we are also carrying it with our bodies — it's not only for percentages. It's about how we, as women, are occupying and reinventing politics.

Other national protests against the candidate have already been called for October 6, a day before the elections.