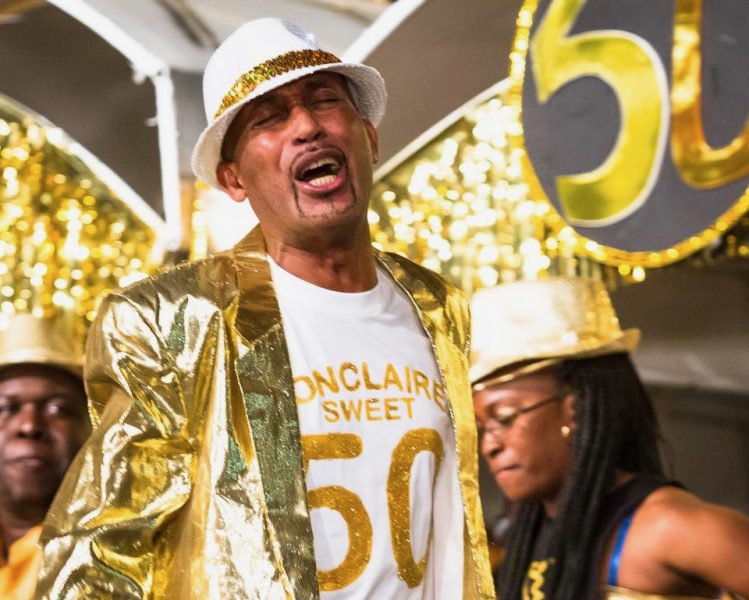 Ken “Professor” Philmore at Trinidad and Tobago's 2015 Panorama finals, on the occasion of the 50th anniversary of Fonclaire Steel Orchestra. Photo by Maria Nunes, used with permission.

On September 30, 2018, one week after being seriously injured in a car accident, Ken “Professor” Philmore, one of Trinidad and Tobago's foremost steel pan composers and arrangers, passed away.

By all accounts, Philmore had always been fascinated with the country's national instrument, even as a young child. He began playing with pan groups in his early teens, where he earned the moniker “Professor” thanks to his serious-looking spectacles, and quickly developed into an exemplary soloist.

Philmore began arranging with south Trinidad-based steel orchestras like Hatters and Fonclaire in the 1980s, all the while recording and performing as a solo musician. His first album, “Our Heritage”, which came out in 1985, was a seamless blend of classic jazz with a Caribbean interpretation, and flavourful calypso fare.

When, circa 1987, Lord Kitchener, considered the “grand master of calypso”, performed one of his hits, “Pan in A Minor”, featuring Philmore as the soloist, the “Professor” became a household name in Trinidad and Tobago:

His crisp, assertive style of playing proved to have wide appeal: the notes came fast and furious, tempered by a joyful, melodious sweetness that was difficult to replicate. He eventually branched out and began to arrange for other well known steelbands, many of which did very well in the prestigious Panorama competition, always a much anticipated part of the country's annual Carnival celebrations.

One of Philmore's most beloved compositions, which Fonclaire played at the 1990 Panorama finals, was “Pan by Storm”. They eventually placed second:

But Philmore didn't limit his talents to the land of his birth. Knowing that steel pan music had the ability to travel — to the Caribbean diaspora who were longing for a taste of home, and to musical communities well beyond those who were already familiar with the instrument — he performed and arranged abroad as well, winning the New York version of the Panorama competition on six consecutive occasions.

His friendly demeanour and energetic personality helped his star to rise; he would go on to share the stage with many international musicians, including Tina Turner, Tito Puente, Andy Narell, and jazz giants Ella Fitzgerald and Lionel Hampton.

As news of Philmore's death reached social media, the tributes began to pour in. Referencing the title of his most recognised piece, one of the country's most popular choral groups, The Marionettes, said that Philmore took “the world by storm with his music”, while jazz trumpeter Etienne Charles called him “genius personified”.

This is the equivalent of a Brahms, Bach or Beethoven passing.
This is huge.
This is a loss.
#Philmore

Pan fraternity has lost an Icon… the music community in Trinidad and Tobago as a whole has lost a legend. Professor is someone I looked up to because he always played like the music was the most important thing. No egos… just good music. Although he achieved so much he remained grounded and down to earth. Greeted you like you were a brother or a sister. There is much that we can learn from what he represented. I feel for his family and his extended family (those musicians that were fortunate enough to work with him over the years), May you find some solace in the knowledge that he will always be remembered and his contributions to our culture will stand the test of time.

Philmore was undoubtedly integral to the development of steel pan music. In 1989, he was honoured by Pan Trinbago, the country's steel pan association, for being that year's most outstanding musical arranger.

A few months later, the mayor of New York presented Philmore with an award for his contribution to music; his stunning performances at venues like Carnegie Hall, the Apollo Theatre, and Madison Square Garden led to an invitation to accompany the Duke Ellington Orchestra on their North American and European tours from 1989 to 1991.

The “Professor” also appeared at numerous international jazz festivals, including Washington DC and Atlanta in the United States, and St. Croix and Barbados in the Caribbean. In 1990, at Pan Trinbago's “50 Years of Pan” awards ceremony, Philmore received the Allan Gervais South-Central Regional Award for outstanding arrangers.

Photographer Maria Nunes, who chronicles various aspects of Trinidad and Tobago Carnival and snapped pics of Philmore on stage with Fonclaire at the 2015 Panorama competition, intimated that even if pan lovers didn't know the “Professor” personally, they understood him through his vibrant, passionate music, so the loss feels close:

I never got to know Ken ‘Professor’ Philmore but I remember so well when Pan by Storm won the hearts of pan lovers everywhere back in 1990. I share in the sadness felt today in the steelpan and wider music community, not just here, but globally, at his unexpected passing from this life.

‘By storm, cultural extravaganza,
Pan by storm, music to make you feel better.
Take it, take it out to the limit, we moving on to a higher heights, pan by storm.’