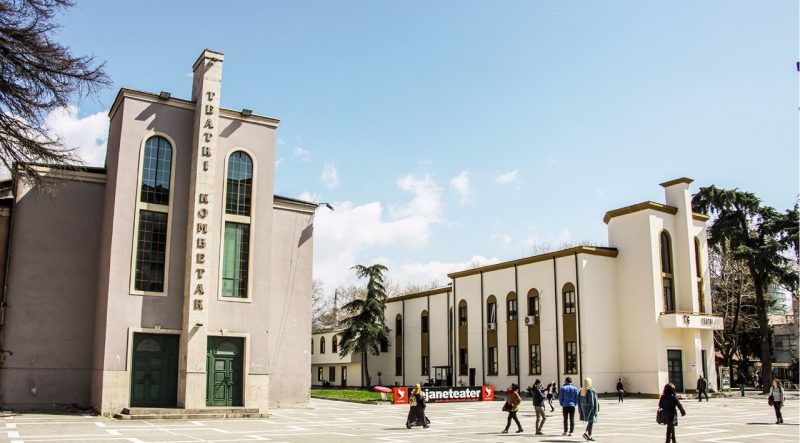 A fight is on to protect the National Theatre in Albania.

For more than three months, artists, activists, and ordinary citizens have been protesting on a daily basis in the Albanian capital of Tirana in response to the government's decision to demolish the historical monument building. Their plan is to replace it with a more modern building proposed by Danish architect Bjarke Ingels.

This is a public-private partnership whereby the Albanian government will grant land to the Fusha company to further develop and enhance the area. 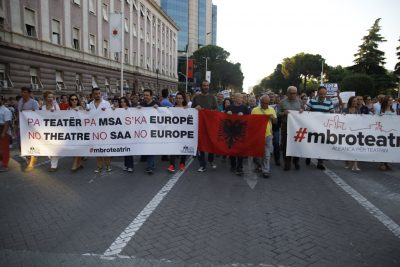 To legitimize the partnership, the government proposed a Special Law [1] in February 2018 (nicknamed The Fusha Law by opponents) that favors procurements and contracts like this.

The parliamentary opposition refused the law, claiming it infringes on the Constitution and the 2003 Association Agreement with the European Union (EU) because it breaks free market competition criteria.

The majority of the ruling Socialist Party voted in favor of the law on June 5, 2018, despite all opposing legal arguments.

As news about the planned Special Law erupted, artists and activists created The Alliance for Protection of the Theatre to demonstrate their commitment to saving the historic building.

In the aftermath of the announced law, the Alliance pushed back in defense of the National Theatre. Tirana mayor Erion Veliaj organized three “public hearings” on behalf of the Ministry of Culture to hear the group's grievances. However, observers suggested these hearings seemed orchestrated to create a discord rather than unity.

During the hearings, the director of the Construction Institute, [2] Agron Hysenlliu, claimed that “activity in [the theatre building] must be suspended as it lacks the technical conditions for safety as to the necessary standards,” according to his state agency's assessment. However, this institute never released these assessments to the public, further inciting doubt about the veracity of these claims. 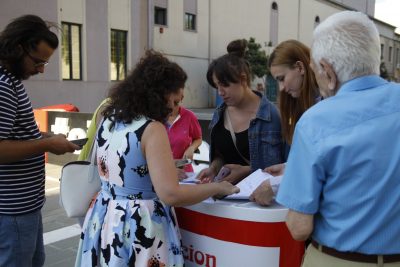 Citizens sign the petition for the protection of the National Theater. Photo courtesy of Rudi Erebara, used with permission.

The Alliance gained momentum as national public figures, historians, academics and journalists joined. The Association of Albanian Architects also made a declaration opposing the demolition of the theatre, [3] stressing the historical and aesthetic value of its Rationalist [4] architecture.

They asked the government:

not to erase the collective memory of the generations, and that any new theatre is welcome but we do not have to destroy the old one.

They also created a petition arguing that the theatre could be repaired and that no official document proves otherwise.

However, some artists in favor of building a new theatre made a declaration of support for the Special Law. This declaration received some fake signatures [5] from those apparently living outside of Albania.

Meanwhile, the state has produced propaganda insisting that the neglected theatre presents a risk to artists who perform there, claiming that the building itself has no cultural value. In fact, they say the building was erected during the fascist period (1939-1943) when it served as a “dopo lavoro” or “working man's club,” further undermining its legacy.

Historians Rubens Shima, Aurel Plasari and others refuted this claim, arguing that its 73 years of history should be preserved and respected with dignity.

“Even the [Communist] dictatorship, did not demolish it,” wrote Plasari [6].

At 16 million Euros (19 million USD) or less than 1 percent of the state budget [7], Albania's annual fund for art and culture is the smallest in the region. Members of the Alliance claim that its degradation and lack of funding for a restoration was intentional.

They point to current Prime Minister Edi Rama who has intended to demolish the building since 1998 when he served as Minister of Culture, Youth and Sports. At the time, he closed the theatre but then Prime Minister of Albania, Pandeli Majko, decided against its closure. In 2002, when Rama became mayor of Tirana, he announced a development plan that would demolish the theatre and build towers instead. Back then, artists were more unified and a bipartisan petition demanded preservation of the building.

In 2016, Albania changed a third of its Constitution and implemented judicial reforms [8] that created an institutional vacuum whereby a high number of judges and prosecutors deemed unfit to hold their posts were expelled.

According to the EU [9], these reforms were considered successful because it weeded out corruption. However, many high positions within the judiciary were left empty, including the Constitutional Court. It is therefore impossible to challenge the Special Law, considered unconstitutional by many, under these circumstances.

Even the Albanian president refused to sign the law [10] and returned it to parliament, but he only has the right to return the law once for further deliberation and could no longer deliberate when the majority voted for the law.

Docomomo International, a watchdog organization striving to modernist monuments, issued the first international call [11] to oppose the theatre's demolition with an open letter urging authorities to preserve the building:

On the context of the extraordinary transformation and innovation period that the city is facing, and since a reconstruction project has been approved for the National Theatre of Albania and adjacent areas, Docomomo foremost concerns rely on the new plans for this cultural center which intent to erase its original integrity. The new, 9,300 square meters contemporary building will be placed in the heart of downtown, right close to the National Opera and the National Art Gallery, replacing the original theatre.

A worthless ‘shack’ or treasure? 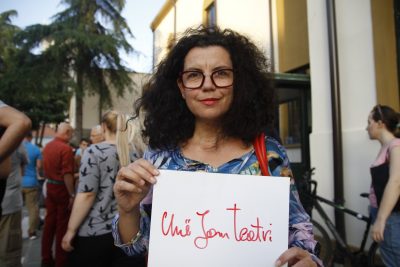 “I am the Theatre” – a protestor holding a sign in Tirana. Photo courtesy of Rudi Erebara, used with permission.

Despite voluminous pleas from major organizations and institutions, Mayor Veliaj [13] continues to call the theatre a “shack” unworthy of repair.

As the Alliance sent petitions, filed suits and contacted EU headquarters, they also made a public declaration [14] to stress multiple problems with the Special Law.

However, Albania is not yet an EU member. In preparation, they have signed the Stabilization Association Agreement [15] (SAA) with the EU and will enter negotiations in June 2019.

Activists point out that if Albania becomes an EU member, then the Special Law would violate SAA agreements. They insist that the parliamentary majority is infringing the Albanian constitution both through contents of the law and via unconstitutional procedures.

EU officials responded [16] to the Special Law by recognizing that it has no “competence to assess the compliance of the Special Law with the existing Albanian legal framework.” Nevertheless, they encourage the Albanian government [17] “to pursue the compliance with EU public procurement principles and ensure non-discriminatory market access”.

While the EU was one of the key sponsors of Albania's judicial reforms, it does not address the institutional vacuum left as a result. 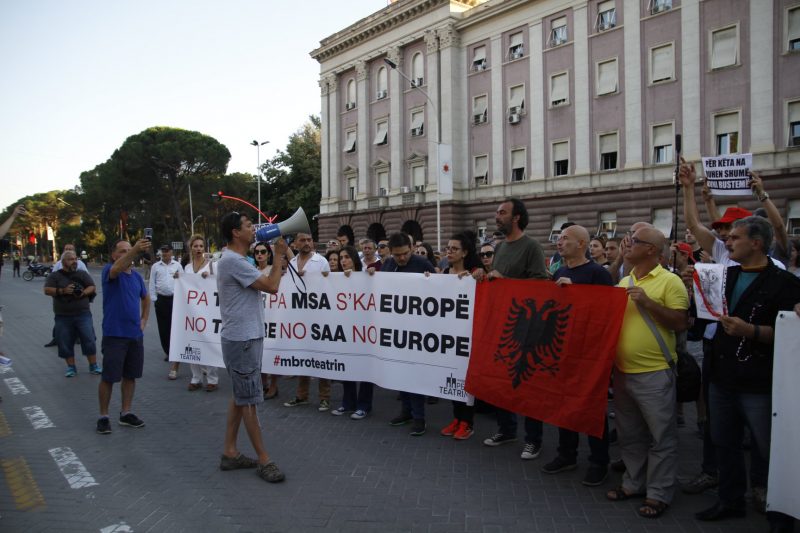 While the exact demolition date is unknown, it could be within three months. Some Alliance members say they will block the path of demolition crews with their bodies if necessary.

They see it as the only way left to achieve their collective goal of saving Albania's cultural heritage.

Editor's note: The author of this post is an active member of the Alliance for the Protection of Theatre.