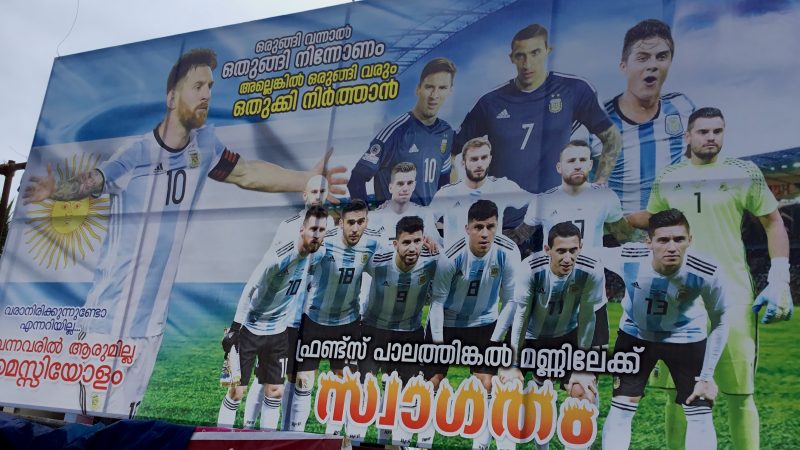 A banner featuring the Argentinian football squad during the last FIFA world cup. Love from fans in Kerala. Image by author.

India, seven-time winners of the South Asian Football Federation [2] (SAFF) Cup and defending champions for six consecutive years, tasted a bitter defeat in this year's edition of the cup that has cast more doubts over the sport's future in the country.

India lost in the final [3] game of the tournament to the unfancied Maldives at the Bangabandhu stadium in Dhaka, Bangladesh on September 15.

A youthful Indian team had been fully expected to bring the trophy home. The Maldives had failed to win a single group stage match and only reached the knockout rounds thanks to a coin toss [4] against Sri Lanka.

The SAFF Cup defeat comes on the heels of a few disappointing decisions by Indian sports authorities.

The Indian Olympic Association (IOA) chose not to send men and women's football teams to the Asian Games in Jakarta, Indonesia in 2018 because, the association's chief said, both teams would be “also rans” [5] and damage India's overall standing in the medal table.

The All India Football Federation (AIFF) called the decision “myopic” [6] and said it had denied Indian football an opportunity to develop itself.

India's progress in the world's most popular sport will be under the microscope again in the Asian Football Confederation's (AFC) Asian Cup, which takes place next year in the UAE.

Since its inception in 1988, it has been the most prestigious quadrennial football competition in Asia. India last qualified for it in 2011 but was eventually knocked out after losing all three matches in Qatar that year.

However, pundits [7] have been talking up the team's chances of progression this year after India was placed in a relatively weak group [8] with hosts Bahrain and Thailand.

Prior to the SAFF Cup, India toured [9] in Australia. Many say the national men's team's notable rise in the FIFA world rankings over the last three years is due [10] to facing easy opponents. Others argue [11] that India's qualification to AFC Asian Cup 2019 would not have been possible without an increase in the number of teams playing in the tournament from 16 to 24. India hosted the U-17 World Cup last year, but the youth side failed to win a game in the tournament [12].

Private-sector leagues like Indian Super League [13] (ISL) established in 2011 and the Indian Women's League [14] in 2016 have changed the domestic football landscape, but many feel that these leagues have come at a cost. [15]

The AIFF has been accused of favoring the ISL over India's premier domestic football competition, the I-League (formerly, National Football League).

In 2017, the fixture-list for the ISL season went out in August while fixtures for the I-League have been delayed, forcing sponsors for I-League teams to back out in the face of uncertainty.

We won't hear date and time of fixtures until it's too late for clubs to get good sponsors.

The fact that some ISL teams are owned [19] by famous Indian cricket players offers an indication of the relative standing of the two sports in India. The Indian channel ‘Star Sports 3′ theoretically dedicated to football often shows more cricket matches than football games. This has frustrated Indian football fans.

But the channel may simply be responding to low public interest. In June this year the Indian men's team captain and all-time highest goal scorer, Sunil Chhetri, took to social media to ask for more public support for Indian football after the AIFF-organised Intercontinental Cup club tournament held in Mumbai drew miserly crowds.

This is nothing but a small plea from me to you. Take out a little time and give me a listen. pic.twitter.com/fcOA3qPH8i [23]

The media campaign “#FannBannaPadega”, meaning “now you have to be a fan”, is an attempt to make football fandom more glamorous. But some say this media driven agenda has come at the expense of a real, grassroots fan culture.

Not agree with the campaign #FanBannaPadega [20] as if you think that why cricket is like a religion in India then you must know what they did in 1983.First they proved themselves then fans joined cricket automatically.I think you got my point.

In 2001, the English Premier League was broadcast [26] live in India for the first time. Since then, support for English teams has boomed [27], mostly among urban, middle-class men, who create fan clubs to cheer on these and other European teams.

In the southern state of Kerala, where Indian football has strong roots, there are also a number of fan clubs dedicated to European teams.

But there are still a few fixtures in the Indian football calendar that get the blood pumping. One is the Kolkata Derby pitting Mohun Bagan against East Bengal, which consistently draws one of the highest crowds of all domestic football games.

Five of us (I'm behind the camera) here at the hostel are relying on a shitty stream to watch the #KolkataDerby [28] while there are two guys watching Cardiff v Arsenal. I never thought I'd experience more audience for #IndianFootball [29] when there's a PL game on. @Rish_Bhat [30] pic.twitter.com/IDEjde2ECo [31]