As Colombia's peace process falters, scores of social activists are being killed 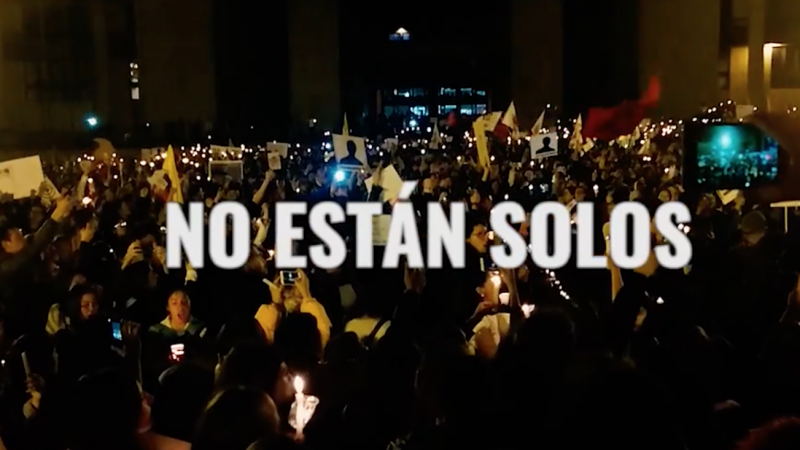 Screenshot of the video “No están solos” (You're not alone) with images of the protests in Colombia in defense of social activists. Video and images shared by Contagio Radio, a Colombian local independent radio station devoted to human rights.

Colombia, one of the most dangerous nations for human rights activists, has attempted to halt its 50-year armed conflict through a complex peace process that began in 2012. As this peace process falters, social activists including local community leaders, land defenders, gender and sexuality rights protectors, teachers and journalists are being targeted and killed at an alarming rate, and the numbers continue to rise.

Recently-elected president Ivan Duque’s government is slow to respond to these killings and sometimes denies the systematic nature of the violence, making it difficult to track and monitor these cases.

In a special report by the newspaper El Tiempo, a map of the killings reveals vulnerable areas where the armed conflict has been most active. The non-governmental organization Indepaz (“Institute of Peace and Development”) calculates that in 2018 alone, around 124 social activists have been killed, and approximately 300 social activists have been killed since the peace agreements began in 2012.

No land, no peace

The Revolutionary Armed Forces of Colombia (FARC), the main rebel group, has agreed to demobilize and surrender arms, but this has left a power vacuum in which some members who abandoned FARC still remain active in the conflict. Perhaps some are motivated by economic interests while others refuse to accept the uncertainties of civilian life. In fact, a number of ex-FARC members have been targeted and killed as they try to reintegrate into society. Other illegal armed groups, notably the Gaitanista Self-Defense Forces of Colombia (AGC), are attempting to gain territorial control in the regions that were FARC strongholds.

Some civil society groups are certain that corporate entities may be behind the attacks, not just illegal armed groups. President Duque’s plans to further develop an extractive economy leaves social activists fearing for their safety as larger international corporations take a vested interest in contested lands.

In December 2017, leaders from Bajo Atrato, a northern Colombian region hardest hit by the violence, visited Congress with their faces covered with white masks after two of their leaders were killed while defending their land from palm oil and banana farming investors:

We're the families of the leaders who have been killed in the region. We've all been threatened with death as a strategy put together by corporations that have already been charged by different legal institutions and business people who have already been denounced. How much longer [will this go on] and how many more [will die]?

“It's all happening before our eyes…”

These people are the thorn in the flesh for the armed groups’ interests: the control of the land, illegal mining and drug trafficking routes. These have a lot of consequences; when they kill a social activist they're killing the possibilities of change in that community, because the projects that this person was in charge of are abandoned and people are scared to continue. Often times people leave town, in fear of having the same fate, or because they've been threatened already. The message is well understood. That way, any opposition is eliminated and everything remains untouched. The ones who are screwed, are even more screwed, and the warlords remain the owners of everything. All of this is happening before our eyes, while the government comes up with just band-aid solutions and even dare to suggest that some of the victims are criminals.

represents a group that has historically opposed peace processes, land restitution and the modernization of Colombian democracy.

In July 2018, thousands of Colombian citizens took to the streets to show solidarity with social activists and human rights defenders, recognizing the need to protest loudly against extrajudicial killings.

Most of their activities, petitions, documentaries, and news can be followed through #NosEstánMatando (#They'reKillingUs) and #NoEstánSolos (“You'reNotAlone), trending hashtags devoted to denouncing the killings and telling the stories of victims to keep their memory and hard work alive.