Nepalese citizens fight against impunity with the “Rage Against Rape” campaign 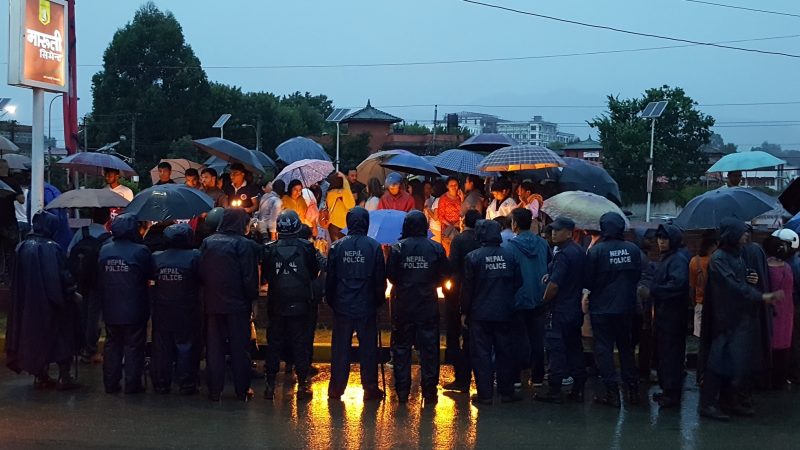 Following the gruesome rape and killing of 13-year-old Nirmala Panta in southwest Nepal in late July 2018, shocked Nepalese citizens have launched the #RageAgainstRape campaign, sparking nation-wide conversations about violence against women in Nepal.

Injustice and oppression exceeded the limit, we were forced to come on the road. While there is a countrywide protest and [the city of] Pokhara remains silent, it cannot happen. Today Pokhara spoke in favor of justice. This solidarity has given new hope. People have risen up together.

Nirmala had reportedly traveled to a friend’s house in the town of Kanchanpur to study but never arrived and was later found dead in a sugarcane field. A 41-year-old convicted criminal was accused of the crime, and two women whose home Nirmala had visited earlier that evening were also held for questioning.

The police concluded that the primary male suspect was “mentally unstable,” infuriating local individuals and civil society groups who accused authorities of an attempted cover-up.

In Nepal, three cases of rape are reported on a daily basis. The police recently released data revealing 1,480 rape cases reported in Nepal in 2017, almost double the numbers in 2016. The number is suspected to be even higher due to the fact that many incidents go unreported.

If the data does not scare you, make you angry then what would? #Security #RageAgainstRape https://t.co/SXzWHW5ycE

Activists took to the streets in the capital city of Kathmandu to express their rage against acts of rape along with dissent against the state for not taking sufficient measures to bring the perpetrators to justice. During protests in late August 2018, one protester was killed and many were hurt as police used force to control the crowds.

There is citizen gathering for #justiceforNirmala nationwide. Please be present at your nearest one.

Throughout the year, activists and civil society groups have accused the government of not taking adequate measures to curb violent crime against women and protests have swept the country calling for the arrest of all perpetrators of rape:

Everyday there’s new reported rape case!This shows #Rape happens everyday!The reporting has increased which is good but the rape numbers has not gone down! Why? The age of victims makes you numb! #JusticeforNirmala #JusticeForAllRapeVictims #RageAgainstRape

In patriarchal South Asia, women's safety and security has been an urgent concern, especially following a shocking gang-rape and killing in Delhi, India that sparked massive protests. In neighbouring Nepal, where the culture of impunity is no different, citizens have been outraged.

The reality of reporting rape in Nepal

There are several reasons why a victim of rape would hesitate to report it in Nepal. In a cultural climate where rape victims are often blamed, it takes immense courage. Victims face complicated legal loopholes as obstacles to justice — often, police investigations drag on too long and DNA testing results are delayed or manipulated.

At the beginning of 2018, when Nepalese men suspected of another horrific gang rape were released, activists cited a failed judicial system that disregards rape cases even when perpetrators have been identified.

Today we are visually representing our voices against #Rape ~ we are recording our #RageAgainstRape #StopJustifyingRape #Joinus to raise voice against rape! #DigitalActivism pic.twitter.com/PAR5Vw8PjL

Amidst pressure, the Nepalese government has issued new codes strengthening laws related to gender-based violence, including longer 25-year jail sentences for rape. If the victim is a minor, disabled or elderly, the accused can receive a life sentence.

But implementing this law remains doubtful due to cultural norms and high levels of corruption that allow criminals to slip through the cracks.

When the stalwarts of 'law and evidence' deliberately erases the 'evidence' and the truth finding committees neither have 'trust' nor the 'commitment' or 'confidence', my only hope is her coming back to point her finger at the murderer #rageagainstrape #protectourdaughters

Throughout the protests, some activists have focused specifically on justice reforms in honor of victims who continue to suffer in silence.

If the whole nation has to come to street to provide justice in a heinous crime, what is happening to girls who are suffering in silence? Are we always going to play reactionary politics or improve our justice system?#JusticeForNirmala#RageAgainstRape