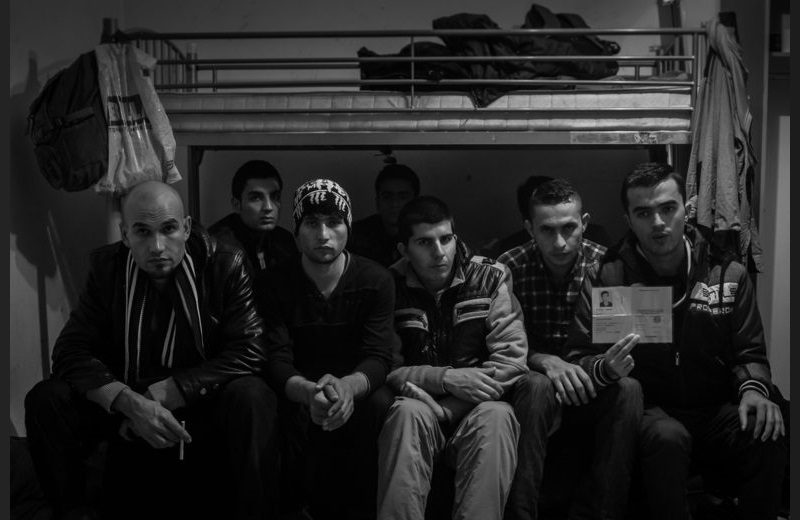 Illegal migrants living in a hostel room in Sofia, Bulgaria. Photo: courtesy of the project by the Center for Legal Aid “Voice in Bulgaria”/José Antonio Sanchez Manzano via BlueLink Stories.

This article is based on Refugee-Fear Politics Targets NGOs, originally published by BlueLink Stories as a part of the project “Remembering Europe: Civil Society Under Pressure Again”, implemented by the BlueLink Foundation with co-funding from the European Union's Europe for Citizens Programme, and republished through a partnership with Global Voices, written by Ksenia Vakhrusheva.

The political hysteria against refugees entering Europe is on the rise although migration in the region has decreased since 2017. Hungary’s prime minister Viktor Orbán has taken the toughest anti-migrant stance, followed by politicians in the ‘Visegrád Four’ or V4 (the Czech Republic, Hungary, Poland, and Slovakia).

On World Refugee Day, June 20, 2018, the Hungarian Parliament ironically adopted legislation criminalizing help for asylum seekers, refugees, or undocumented migrants. A two-thirds majority of the current ruling party Fidesz passed the new Article 353/A into the Criminal Code which states that any person providing legal help or distributing leaflets and other materials on the refugee rights and housing opportunities should be arrested and cited for “facilitating illegal migration.”

If conducted on a regular basis or in the context of an organisation or network, the punishment is up to one year in prison. The government can also shut down these organisations, halt or severely limit their activities, or slap them with a fine.

The Venice Commission issued a detailed explanation of why this code violates basic human rights principles, limits the work of non-governmental organisations (NGOs), and breaks international standards and legal protocols. They say the law does not effectively target illegal migration, for which regular provisions are already in place under Article 353.

The law came into effect on July 1, 2018, with questions from both the Jobbik and Socialist parties about how the law would actually work. Hungarian NGOs are still unclear about how the new law will impact their work.

In a press release following the adoption of the anti-migrant law, the HHC stated:

[We] will continue to provide legitimate and free-of-charge legal assistance to asylum-seekers and will seize all available legal and advocacy opportunities to challenge this law that breaches fundamental rights and [European Union] EU law. 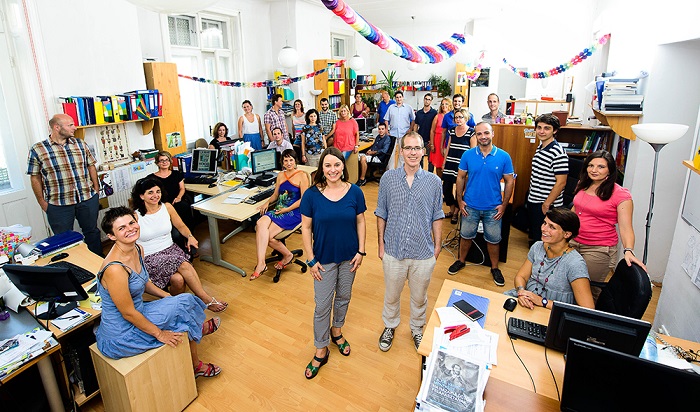 The HHC office. In 2017, they received the Calouste Gulbenkian Prize in Human Rights for its “unique and exemplary” character in providing regular and free legal assistance to asylum-seekers, refugees and stateless persons in Hungary. Photo: Ákos Stiller, used with permission.

The anti-migrant law has sparked fierce debate among Hungary's political parties as well as citizens. Hungary's two major political parties, the ruling Fidesz party, and the far-right Jobbik party, both support the law, holding 80 percent of seats in parliament.

The interest of this government is to keep this problem alive instead of solving it.

an attack on people seeking safe haven from persecution and those who carry out admirable work to help them.

Surprisingly, even Jobbik leader Márton Gyöngyösi, in his comment to BlueLink.info, acknowledged:

this is the most ridiculous piece of legislation we’ve seen in a while.

He says his party faced a “difficult dilemma” prior to voting on the bill that remains unresolved. He admits:

…real measures were omitted from the new bill, while several new elements were added, concerning judicial reforms or a constitutional amendment. Therefore we see it as a clearly politically motivated piece of legislation, that’s only goal is to satisfy Fidesz’ voters who expect aggressive rhetoric from the government. In our opinion, measures envisaged in this law are ridiculous and not likely to have a real effect. Voting for this legislation had no real importance.

Fidesz representatives did not answer the inquiry for a comment at the time of publishing this article.

Those who oppose the law say it doesn't match the reality of current statistics showing a significant drop in the number of refugees entering Hungary. Around 20,000 people in 2017 were blocked from entry at the border fence or escorted to the external border. According to the HHC, 267 refugees were granted protection in 2018 while rejecting at least 326 applicants, mostly hailing from Afghanistan, Iraq, and Syria.

In neighbouring Slovakia, approximately 79 percent of citizens surveyed report negative perceptions of immigration. These sentiments were then stoked by politicians to gain support during parliamentary elections held in March 2016.

However, since August 2015, the government has regularly consulted with NGOs helping migrants and allocated 500,000 Euro (nearly 589,000 USD) for immediate humanitarian assistance as well as ongoing projects. In 2016, the government created a 20 million Euro (nearly 24 million USD) “reserve” fund for migration-related issues.

According to statistics, Slovakia has one of the lowest numbers of asylum seekers among all EU countries.

Alena Krempaska, a programme director at the Human Rights Institute in Slovakia, confirmed in a comment to BlueLink.info that the Slovak government supports NGOs working with migration issues. The Human Rights League received a grant from the Ministry of Interior in 2016 for working with migrants. Yet, Krempaska sees it all as a “political game, a discourse, rather than real steps.”

NGOs do the work and take the blame

CEE governments tend to comply with international and EU standards by providing funds to NGOs who provide a wide range of refugee support services, all free of charge to their clients. Yet, from Poland to Bulgaria, aid looks different across the CEE region depending on how well NGOs and state authorities cooperate.

According to Radostina Pavlova, a legal expert with Voice in Bulgaria, Bulgarian authorities often help migrant-support organizations that the state, in principle, should fund. Access to State Agency for Refugees (SAR) funds is tricky, often dependent on a strict timetable misaligned with real-time needs. Pavlova notes, however, that

the Ministry of Interior has significantly improved in the past two years and many organisations now work in the closed centres for migrants which are under its supervision.

A Council of Europe report published in April 2018 corroborates this funding dilemma and SAR itself noted in its annual report that cooperation between local and international NGOs and state authorities is limited, leaving a huge burden of care on the NGOs.

Following Hungary's new anti-migrant measures, Pavlov worries the same could happen in Bulgaria. While Bulgaria's refugee numbers have also significantly dropped since 2017, Bulgarian authorities still monitor Turkish borders, where they say a newly built fence with a surveillance system does not always work and refugees can still cross illegally.

Not in my backyard

While many CEE governments acknowledge the need to finance refugee support activities, NGOs lament a lack of support for their work on the ground, with governments preferring to support external activities in crisis zones. 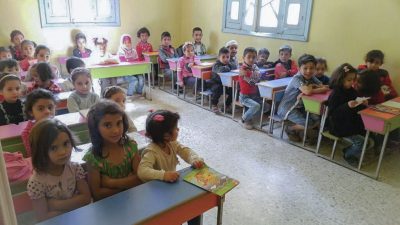 An education project in Syria by Free Syria Foundation with the donations collected in Poland. Photo by wolnasyria.org.

Samer Masri of Free Syria Foundation in Poland acknowledged in his comment to BlueLink.info that Polish NGOs face difficulties in cooperating with state authorities even though his foundation receives at least half its funds from the Polish Ministry of Foreign Affairs:

We are realising projects that are in line with the Polish government’s policy … We also brand our project as an act of gift from great Polish Nation to Syrians … and we use Polish national symbols … So, everybody likes us and we can do what we want and of course we get support if we need it.

During the European Council summit in June 2018, a majority of leaders supported policies to prevent migration to Europe, including tactics such as strengthening relations with “origin and transit” countries, halting illegal border crossings, and supporting refugee facilities in Turkey — keeping refugees out of Europe's backyard.