Beijing authorities slam Swedish police for humiliating Chinese tourists, but there's another side to the story 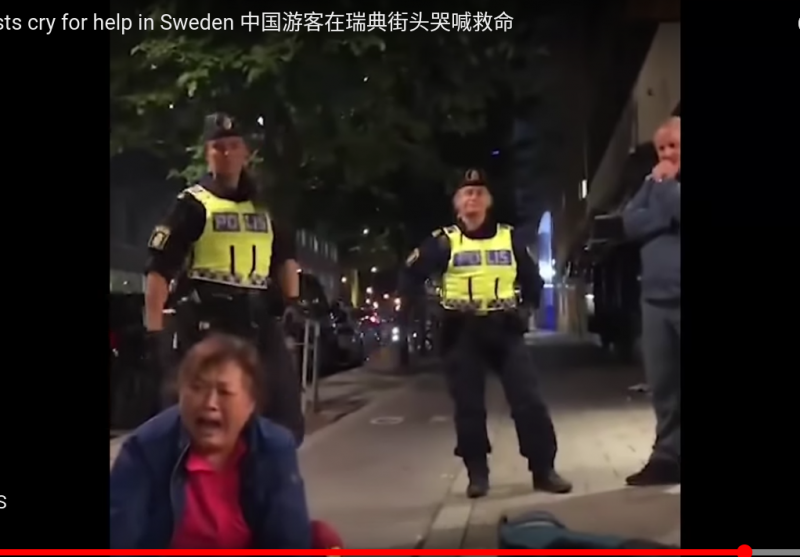 Screenshot of the clash between Chinese tourists and Swedish police on September 2, 2018, posted by the Swedish media out Aftonbladet.

On September 14, 2018, the Chinese Ministry of Foreign Affairs issued a safety alert for Chinese travelers visiting Sweden, after claiming that three Chinese tourists had been brutally abused by Swedish police while vacationing in Stockholm.

A number of Chinese media outlets reported the incident as “brutal” with vivid details and video clips that showed three Chinese tourists screaming and crying for help outside the Generator Hostel in an apparent confrontation with Swedish police.

Reports from Chinese outlets quickly stirred patriotic sentiments on Chinese social media. However, a video released the next day from the Swedish media outlet Aftonbladet offered a different side to the story, leaving viewers to question the veracity of the debacle.

The Chinese side of the story

According to a report from the Global Times, a media outlet affiliated with the Chinese Community Party, the Zeng family of three arrived in Stockholm past midnight on September 2, hours before their official check-in time, and demanded to rest in the hostel's lobby. The staff allegedly felt threatened by the Zengs’ demands and called the police, who forcibly dragged all three out of the hostel.

Zeng claims his father then had a heart attack and fainted while standing outside the hostel and that the police did nothing to assist. Zeng also told the Global Times that the police later dragged them into police vehicles and beat his parents. Instead of taking them to the police station, Zeng claims the police “dumped them in a cemetery at least 30 kilometers south of the hostel.”

The Swedish side of the story

In response to the safety alert announcement made by the Chinese government, Swedish Chief Prosecutor Mats Ericsson said that authorities investigated Zeng's allegations of the incident and on September 7, they exonerated the police of all wrong-doing.

Ericsson denied allegations that the Swedish police had beaten Zeng's parents. However, he did admit that the police did lead the Zeng family into a police vehicle and dropped them off at the Skogskyrkogården subway station near the famous cemetery-garden tourist destination, located only eight kilometers south of the hostel. The police explained that anyone who creates a public disturbance in Stockholm is typically brought to this subway station and expected to fend for themselves.

Hu Shijin, the chief editor of the Global Times, agreed that the Zeng family's behavior was ‘uncivilized,’ but insisted that the Swedish police should not have stranded them at the subway station.

The Swedish media outlet Aftonbladet released a video of the altercation and also interviewed the hostel manager who said they only called on security guards when Zeng's demands became threatening:

We only know that we have done everything we could do for this guest, but at the same time we cannot accept that our staff are exposed to threats and that other guests will suffer from a threatening situation. [English translation of the interview via Guardian]

One passerby interviewed by Aftonbladet says that Zeng’s family was making a scene and pretended to fall down when approached by police. This testimony was backed up by the video released via Aftonbladet.

As the Aftonbaladet video of the incident circulated on social media, Chinese public opinion began to shift. One Twitter user reposted the video and used the term “china” (meaning “ceramic”) to mock what he calls a “staged crash”:

The following are some popular comments from Weibo, China's largest social media platform, where netizens critiqued both the Chinese government and the family:

The Ministry of Foreign Affairs wanted to make use of the incident to stir patriotic sentiment to exercise pressure on Swedish government. But netizens know too well what’s right and wrong and now it slaps its own face.

Arrived at Stockholm late at night without booking a hostel and expected to sleep at the hostel lobby. When rejected, cried, yelled, hung themselves and staged crash. This is an effective strategy [in China], but not working in Sweden. The Swedish police don’t care about such scoundrels. The Ministry of Foreign Affairs backed them up, this is so embarrassing. Party mouthpieces which kept attacking Sweden, channeling patriotic sentiment and inciting populism, do they care about their reputation?

On Twitter, more critical comments surfaced about China's motives for circulating this story:

Three Chinese made a scene in Sweden and were forcibly moved away. So many Chinese media outlets and patriots protested and condemned the act. However, when Beijing evicted rural workers at negative eight degrees Celsius and both adults and children were left homeless in the streets, these people kept silence and didn’t dare making a fart. The whole thing makes me understand one thing: those who talk in righteousness when no courage is required while choose to keep silence when courage is needed, they are not cowards but hypocrites.

Joe Chung, a political news columnist, provided a list of reasons why the Chinese Ministry of Foreign Affairs would bother to comment on such a minor dispute:

1. Sweden refused to keep silence on the abduction of its citizen Gui Minhai. Last June [2017], 37 Swedish newspapers co-signed a statement urging the Chinese government to release Gui Minhai and criticizing the Chinese government for infringement of human human. Now the Chinese Embassy in Sweden condemns the Swedish authorities for infringing on the rights of three Chinese tourists to make Chinese people believe that Sweden has no position to criticize China.
2. Sweden, a small country [in the eyes of China] dared giving a 22-month jail sentence to Dorjee Gyantsan, a Chinese spy responsible for collecting exiled Tibetan communities’ information in June this year [2018].
3. Sweden accepted [Tibetan] Dalai Lama visit to the country last week [Tibet and China have longstanding political issues].

Chinese party-affiliated media outlets have not apologized for spreading misinformation on the incident. Instead, they criticized Chinese netizens for acting like ‘slaves’ to Western opinion and taking the wrong position.

In an interview with Swedish newspaper Expressen on September 17, Chinese Ambassador Gui Congyou defended the family's rights, insisting that the Swedish police had threatened and humiliated the Zeng trio.

The Chinese version of the interview was widely circulated online.