While some Brazilians tried to school Germans on Nazism, others apologized in shame 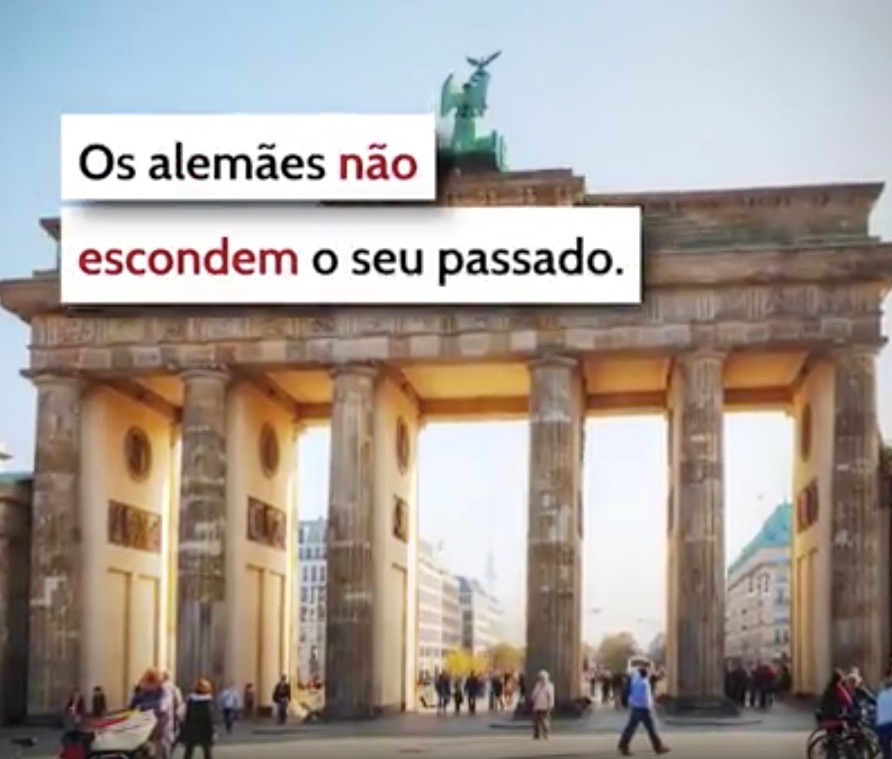 In the video entitled “how they teach History in Germany”, the country's Embassy says: German people do not hide their past | Image: Reproduction/Facebook

Over the past few years, it has become a trend in Brazil to assert that Adolf Hitler and his Nazi party were leftists. The idea is based on the simple—and quite literal—fact that the party’s full name translates as German Workers’ National Socialist Party. And “socialist” equals left, correct?

That is not accurate, of course. But, the ludicrous theory has resurfaced once again among Brazilians after the Germany Consulate in Recife, Pernambuco, in the Northeastern region of Brazil, posted a video explaining how Germany values “knowing and preserving its History, so it won’t have to repeat it.”

In a little over a minute, the video, which has 829,000 views at the time of writing, asks what would happen “when the extremist right-wing comes back to the country?” It answers with a quote from Foreign Affairs minister Heiko Mass:

“We need to oppose to extremists from the right, we shouldn’t ignore them, we have to show our face against neonazis and anti-Semites (…) Whoever protest agains Nazis is not from the left, is normal”.

German people do not hide their past. Know how they teach History in Germany #history #germany #museums #deutschland #past #future

After posting the video, the Consulate’s official page was flooded with comments from right-leaning groups questioning how Germans themselves view Nazism:

German embassy say whatever they want you to believe in. The worst part is comments from historians who never even read a comic book. Nazism was never from the right. You just have to look at the history that is written. Those who believe in anything anyone says are dummies.

Another commentator on the German Consulate's Facebook page questioned the video's claim that the country created a law in 1976 forbidding people to question “the veracity of the Holocaust, because specialists were unmasking this farce”. A different person responded, saying “the holofraud's days are numbered.”

Back in May, a veteran news anchor from TV Globo, Alexandre Garcia, also tweeted a statement in support of the theory:

Do you want me to say the name of Hitler’s Nazi party? Nationalsozialistische Deutsche Arbeiterpartei. Translating it: German Workers’ Socialist Party. I think it’s clear. According to the methods they used, it’s no coincidence.

This time, however, the reaction was quick. While some Brazilians were putting the nation to shame (to an extent one Twitter user joked was worse than the 7 to 1 score in the 2014 World Cup), others were apologizing for them:

The German embassy is wrong. Little Joe from the grocery store, who only gets his info from WhatsApp memes is the one who is right.

One user even coined a new term especially for the moment:

BRAZILIANSPLAINING: thrilled Brazilians who never cared about politics (but saw a couple of videos in the past months, joined Facebook groups and today believe themselves as MAXIMUM authorities in the matter) are trying to explain to GERMANS what NAZISM and the HOLOCAUST were.

Following the controversy, in an interview for O Globo newspaper, the German ambassador to Brazil, Dr. Georg Witschel, declared that “saying that Nazism was a leftist movement is bullshit”.

In an interview with the newspaper El Pais, Damaris Jenner, the press spokesperson for the Embassy, explained how they came up with the idea for the video:

“The week we thought about making this video, the manifestations at Chemnitz were taking place and several Brazilian news outlets were reporting on it”, she says. The protests were led by extremist right-wing militants since the end of August against the death of a German man, alledgedly stabbed by two immigrants, that ended up in more violence. “We thought it would be interesting to connect both subjects to show this discussion in Germany”, states Jenner. The reaction took them by surprise. “We couldn’t imagine that it would have these kinds of repercussions.”

The paper also mentions that there is a German word to describe this episode: Fremdschämen—when you’re ashamed by somebody else’s actions.

The magazine SuperInteressante tried to put the discussion to rest, explaining that Nazism was much more aligned to the right than to the left. In spite of carrying “socialist” in its name, the regime despised Soviet-style communism and leaned more toward with economic liberalism, a political system traditionally connected with the right.

More important than being part of the right or the left, what really defined Adolf Hitler’s policies and goals were neither capitalism, nor socialism: it was racism. Nazism, and how it consolidated itself in the 1930s, was characterized by a nationalism for few people, the “arians” Germans. Any other group that did not fit into this idea was not allowed to be part of the German State.

The Holocaust was “one of the most brutal episodes in History“. The Nazi's “Final Solution”, a plan to exterminate Jewish people from their country and the lands conquered by the regime, ended with millions dead. And, as the BBC explains:

The Jews were not the only victims of Nazism. It is estimated that as many as 15 million civilians were killed by this murderous and racist regime, including millions of Slavs and ‘asiatics’, 200,000 Gypsies and members of various other groups. Thousands of people, including Germans of African descent, were forcibly sterilised.