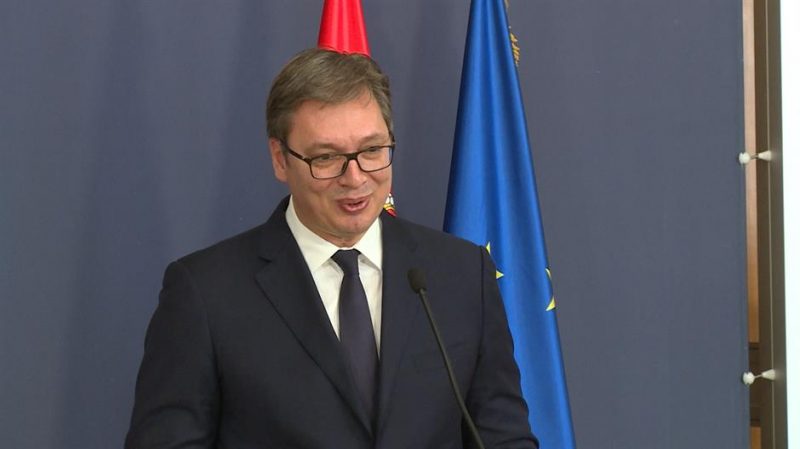 Screenshot of President of Serbia Aleksandar Vučić publically apologizing for using information from The Onion, by N1 TV.

Serbian President Aleksandar Vučić publicly apologized to citizens on Friday, September 14, 2018, for claiming that a window washer dies every ten seconds in the United States as part of his remarks on the tragic death of two workers at a Belgrade Waterfront construction site.

Vučić claims that in America a window washer perishes every TEN SECONDS.
It was published by the satirical portal THE ONION, which is similar to [Serbian satirical portal] NJUZ.
The article is of course a fabrication.
If true, it would mean that more than 8500 window washers perish on DAILY basis.

The next day Vučić retracted his false statement, explaining that he had not thought his statement through carefully due to exhaustion:

‘I want to apologise to all citizens, yesterday at a press conference I spoke about accidents that happen across the world within the construction sector and I said that every ten seconds a window washer in America dies, which is an information taken from some satirical website. I don't blame my advisers, if I had thought that through and if I wasn't tired I would realize it's odd,’ Vučić said, adding that it's normal to make mistakes.

The article used as a source for the quote by Vučić was published by The Onion, a United States-based satirical media platform, under the title “Study: Every 10 Seconds A Skyscraper Window Washer Falls To His Death” in March 2011:

A study released Monday by the Department of Labor found that every 10 seconds, on average, a window washer somewhere in the United States accidentally plummets to his or her death.

‘I can't change the fact that it made me look stupid and that it was all stupidity, but there was no ill intent.’

Media who are friendly to Vučić's regime conveyed the apology with a slant that painted him as “a cool guy,” using the term “šmeker”. Vučić's team used the blunder as an opportunity to add that the state will take care of the cancer treatment for Dušan Todorović, a cancer-stricken four-year-old.

In fact, the 191,000 Euro (approximately 225,000 USD) that enabled Dušan Todorović to travel to a Barcelona clinic last Saturday, September 15, had been raised in a frenzy by everyday citizens to save his life.  Over half the funds was gathered through the Support Life Foundation (Podrži život), while an anonymous donor paid the remainder directly to the Spanish clinic.

Netizens criticized Vučić's actions, blaming him for capitalizing on the error to gain political favor, and blaming the media as sycophants who enable his propaganda:

Two workers die – he states the stupidity of the century and they declare him šmeker (a cool guy).
He sells Kosovo – they declare him a patriot.
Citizens of Serbia gathered money on their own to pay for Dušan's treatment, he didn't do anything until it was over – they declare that he's the greatest humanitarian and benefactor.
And we keep silent?
OK then. We deserve to be screwed.

On Monday, September 17, Serbia's popular satirical website NJUZ NET (“njuz” is Serbian transliteration for “news”), reacted with its own satirical story entitled: “The president promised that in the future he would be more careful while obfuscating deaths of workers”.

According to Meta.mk, a news agency, the results of the investigation into the death of two workers have not yet been made public. Since the beginning of 2018, 28 workers have died on the job in Serbia.

Belgrade Waterfront is a controversial project of urban renewal which the Vučić government often showcases as a huge success to attract foreign investors. Since its inception in 2014, the project has been steeped in controversies, scandals, and cover-ups.

The media has faced immense political pressure against reporting on the organized crime associated with the illegal demolition of existing buildings within the project's designated areas. This sparked a citizen protest movement known as “We won't let Belgrade D(r)own,” accusing the project of money laundering and corruption.