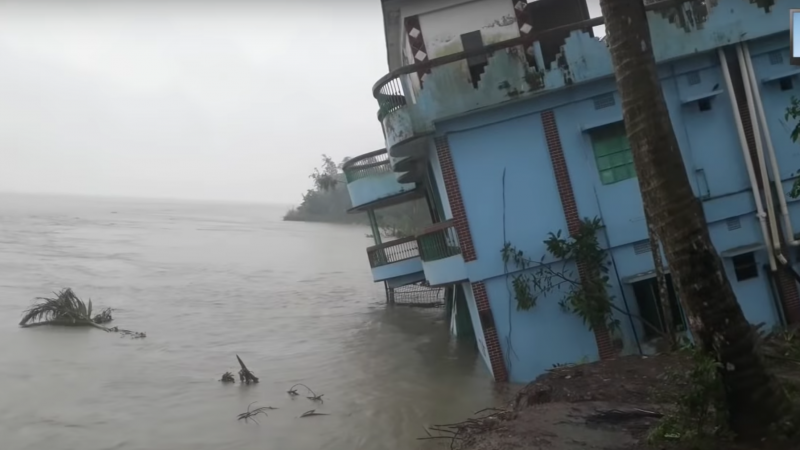 A building engulfed by the Padma River in Bangladesh. Screenshot from YouTube Video by user TechTV BD.

As the mighty Padma River [2] in Bangladesh experiences unprecedented levels of soil erosion, a vast area of Dhaka's Naria Upazilla [3] region in the Shariatpur District has vanished. [4]

The Padma river is currently facing increased water flows after extended periods of heavy monsoon rains in the upstream areas. More than 5,000 families and over 500 businesses in Naria have lost all their land and belongings [4] in the last few months, according to Relief Web [5]. In one week, 3,000 families in the area of Mokhtar Char lost everything [6]. In addition to homes, many roads, bridges, culverts, businesses, shops and other critical infrastructure were submerged underwater.

Shocking videos have surfaced online of the massive damage caused by soil erosion along the Padma, with entire buildings engulfed within seconds:

The Padma river has eroded approximately 0.4 sq km near Naria Upzilla (Shariatpur) in last few weeks. A quick analysis using satellite images shows at least three mosques, one health complex, one school, and one bank have been partially or totally engulfed by the Padma river. In the meantime, approximately 1.5 km of road and hundreds of houses and commercial infrastructure were lost although 2018 has not yet been a flood year in that area. 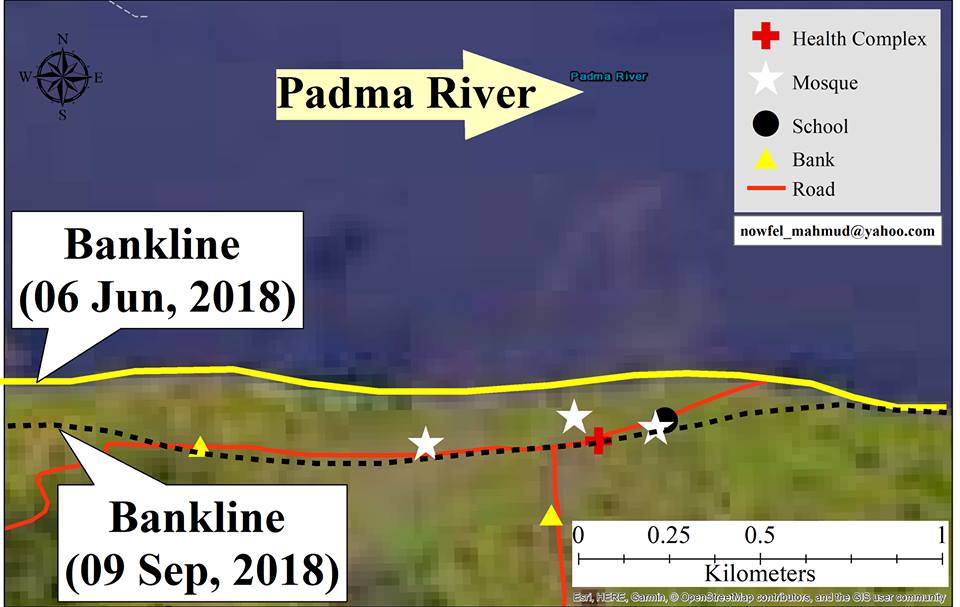 A qualitative damage assessment due to the Padma River erosion near Mulfatganj Bazar (Naria, Shariatpur) as on September 11, 2018. The analysis was done using satellite imagery and Google Earth data as field surveyed data was not readily available for verification. It should also be noted that the damage in that area must have changed by the time this article was prepared as the Padma River is eroding on a daily basis. Image credit Md N M Bhuyian, used with permission.

Inhabitants along the Padma River often experience damage from soil erosion due to the river's changing course but the rate at which the Naria region has vanished is alarming.

The site is a little more than 20 kilometers downstream from the Padma Bridge project [28], Bangladesh's largest bridge in the making.

The Bangladesh government has placed some geo-bags and sandbags along the free-flowing Padma River, but not enough to manage the deluge of water and debris breaking through the large, fragile sand beds [29] along the riverbanks. The government has also prepared 39 crisis centers to provide food and shelter for victims.

In early 2018, the government approved a 255 million USD budget for the Flood and Riverbank Erosion Risk Management Investment Program [30] so that the Bangladesh Water Development Board can construct at least 50 kilometers of riverbank protection structures and rehabilitate at least 89 kilometers of flood embankments, but the project never commenced and is now stalled due to flooding.

…The devastating erosion of the Padma river is ongoing for the last couple of years, no initiative to build a dam or embankment was taken by the local administration. A big portion of Naria Upazila Health Complex and a mosque adjacent to the hospital already washed away…

Mr. Latif believes the government should declare the area a disaster zone and start dredging the river along with building embankments to prevent further damage. The following video shows everyday citizens struggling with relief efforts along the riverbanks:

During the monsoon season, Bangladesh's approximately 24,000 kilometers of waterways [32] carry huge amounts of silt, sand, and murky water. According to an August 2018 report [33] published by the NASA Earth Observatory, over 66,000 hectares (256 square miles) of land has been lost [29] due to erosion caused by the Padma River since 1967. Every year, at least 200,000 people become environmental refugees [34] due to land lost from soil erosion:

A 2018 study by the Centre for Environmental and Geographic Information Services (CEGIS) [35] projected a loss of around 2,270 hectares of land in 2018 due to riverbank erosion. The report also predicted [36] 22 probable vulnerable locations along the banks of the Jamuna, the Ganges, and the Padma rivers.

Journalists Mohammed Norul Alam Raju and Afroza Taznin wrote [36] in an Op-ed in the Daily Star:

The government should include river bank erosion disaster in its five-year programmes and a clear vision should be set for addressing it.