Kyrgyz artist calls on girls to ‘create our own freedom’ in breakout song, *drops mic*

Teenage artist Zere Asylbek has burst into public life in Kyrgyzstan with a song defending women's rights to do as they please with their bodies.

In doing so, she has also made her mark on a highly-charged debate with both national and global dimensions.

The song Kyz, which translates as ‘girl’ in Kyrgyz is Zere's first recorded song. Interviewed by the Kyrgyz service of RFE/RL on September 16, Zere said she did not consider herself a musician per se, but rather a “creative person in the freest sense.”

The point of Kyz, she said, was to highlight that while every person has their own mission, “the missions of others should be accepted, or at least acknowledged.”

What is this song all about?

In Kyrgyzstan, women's clothing has been a hot-button topic for some time, pitting conservatives against secularists wary of Islam's growing as social battles simmer over the ex-Soviet country's future.

Former President Almazbek Atambayev poured lighter fuel on the bonfire in 2016 when he endorsed a series of banners that asked “where (the Kyrgyz people) were headed?”

The banners printed by a patriotic group compared a relatively recent penchant for the niqab in some parts of the country unfavourably with traditional Kyrgyz dress.

Those banners were later met with an ironic response in the form of banners carrying the same alarmist question but instead showing Kyrgyz women wearing short skirts and shorts in place of the women wearing niqabs.

Atambayev called the authors of the second banner “smarty-pants.”

“Our women have been wearing miniskirts since 1950s, and they never thought about wearing an explosive belt,” said Atambayev.

His throwaway comments on Islamic dress have been echoed by politicians elsewhere, including former British foreign secretary Boris Johnson earlier this year. 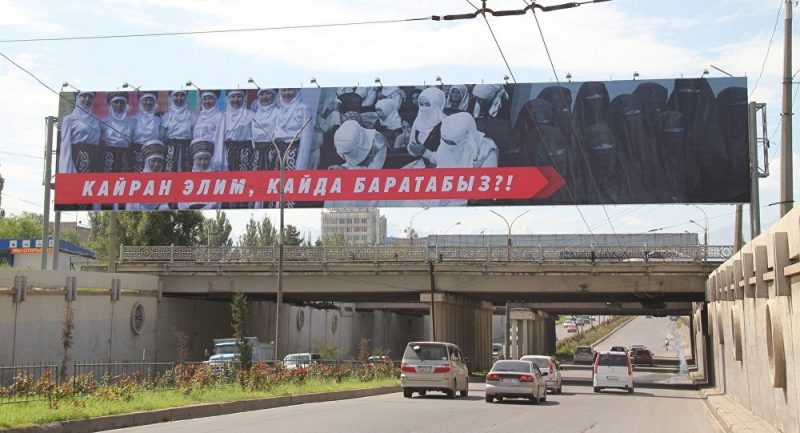 A controversial banner calling on women to disavow the niqab as non-national was put up in Bishkek by a group of patriots and later across the country after it won approval from ex-leader Almazbek Atambayev. Some of the banners were damaged or burned. Photo by Sputnik.kg. Used with permission. 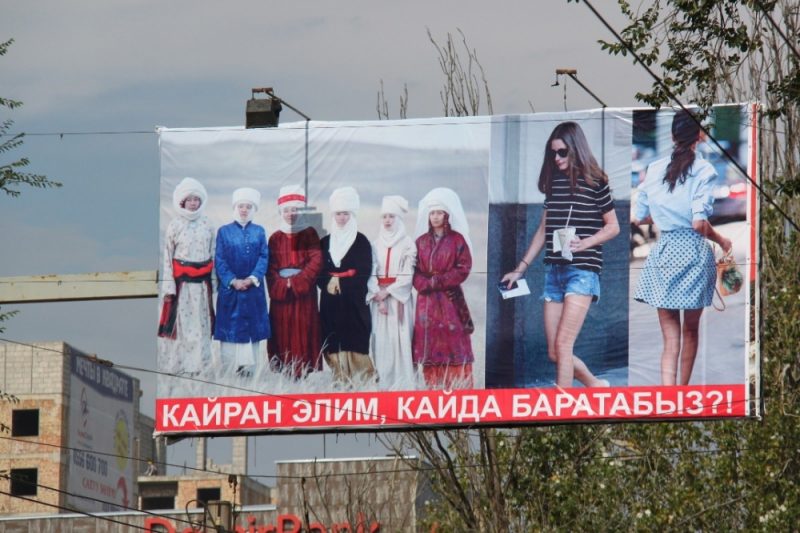 A response to the original banners. Photo by Kaktus Media. Used with permission.

Poignantly, the video for Zere's debut song features women whose dress speaks to Kyrgyzstan's diversity. Unsurprisingly, that message has failed to please everyone.

Currently the video has gathered around 120,000 views in four days, a phenomenal number considering Kyrgyzstan is a country of just 6 million and the song is in the Kyrgyz language, rather than in the republic's second language, Russian.

As of this writing the clip has been liked 2,000 times and disliked 5,500 times. Many of the comments on Facebook posts featuring the video express disgust and even hatred towards the 19-year-old singer.

Hot topic in Kyrgyzstan this wkd: 19yo singer posts a feminist video wearing a bra and a jacket with ‘none-of-your-business’ message. Everyone judges and says ‘yeah, nice song, but would hv bn better to wear smth else’. People, it’s none of your business. https://t.co/7ZsECutMhv

Writing on Facebook shortly after the clip's release, Zere Asylbek's father Asylbek Zhodonbekov said that he had received a mixture of congratulations and complaints from friends and acquaintances.

Zhodonbekov noted that Zere had become inclined towards political activism after a bride kidnapping victim was murdered by her captor inside a police station as she was waiting to write a witness statement against him in May.

The shocking crime sparked protests against law enforcement's negligence in a country where thousands of girls are kidnapped every year and “had a strong impact on her”, he said.

Some of the messages Zhodonbekov received were particularly harsh. One acquaintance even compared Zere to Baba Yaga, a scary witch-like character from Russian folklore. “Is this really your daughter?” the person asked.

“Yes, Zere is my daughter,” Zhodonbekov wrote in his post. “A free-thinking daughter of a free Kyrgyzstan.”