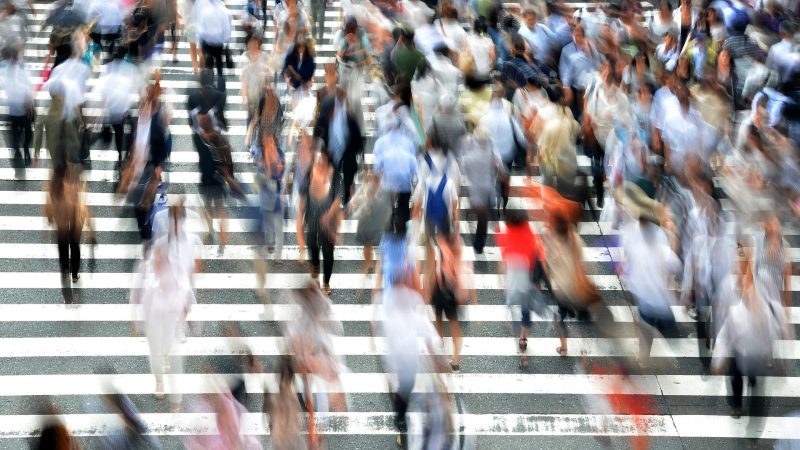 Pedestrians cross a street in busy Osaka. Image from Pixabay.

Japan is known for being a relatively homogeneous society. Just 2 percent of residents are foreign nationals, compared with neighbor South Korea's 4 percent. However, Japan may soon have little choice but to accept more workers from abroad in order to cope with an expected shrinkage in the working population caused by an aging and low birth rates. As the country's labor shortage has reached its most extreme level in more than 40 years, with 1.48 jobs for every applicant, there are signs the Japanese government is considering immigration as a solution to the problem.

Japan has traditionally favored domestic reforms that have avoided immigration as a solution, such as encouraging retired workers to re-enter the workforce and utilizing artificial intelligence.

A key part of Prime Minister Shinzo Abe's policy of economic reforms, dubbed “Womenomics“, also involves getting more women into the workforce. While this policy has achieved some limited success, domestic reforms alone are unlikely to be enough to fill the gaps in the labor market.

“We are opening up our country.”

“We are opening up our country,” said Kono. “We are now trying to come up with a new work permit policy so I think everyone shall be welcome in Japan if they are willing to assimilate into Japanese society.”

Prime Minister Abe also recently announced plans to attract 500,000 foreign workers to Japan by 2025 to fill chronic labor shortages in farming, construction, accommodation, and elder care by creating a new five-year visa category for non-professional foreign laborers. In order to support its graying citizenry and stabilize its population at 100 million, Japan would need to accept a whopping 200,000 immigrants each year.

The country had 1.28 million foreign workers as of October 2017, with Chinese workers making up the largest portion at nearly 30 percent, followed by those from Vietnam, the Philippines, and Brazil.

As urban areas become increasingly international, one out of ten 20-somethings living in Tokyo are now foreign-born. For twenty-year-olds living in Tokyo, that number increases to one in eight.

For some people, immigration is already a reality in Japan.

While Japan is busy arguing about whether or not to accept immigrants, they're already coming in, and it's not as if there's a ban on immigration or anything. Tokyo is pretty much a haven for immigrants at this point.

A focus on temporary “trainees”, not “migrants”

Many foreign workers enter the country via the “technical intern trainee” system, a 1990 program designed to transfer technical skills. Critics see the scheme as encouraging simple and cheap labor by allowing businesses in the industrial, agricultural and fisheries sectors to cheaply hire youth from abroad.

Trainees cannot change jobs, and there have been numerous reports of their being subjected to illegally long work hours and physical abuse from employers. Vietnamese trainees were even made to take part in nuclear decontamination work in Fukushima. Twitter user Mulboyne shared a Mainichi newspaper report about a Vietnamese worker who, after being left with only the equivalent of US$200 per month in pay despite working full-time, found a better-paying job by working under the table:

Although she kept her head down, police found her when conducting an investigation into another matter. She was arrested in April. The article notes her co-workers said she was a hard worker, very diligent and never late.

While trainees are currently able to stay for a maximum of five years, Abe's proposed reforms would allow those who have completed the program to stay for up to five additional years. However, the focus remains on encouraging temporary stays over permanent immigration. Trainees would be unable to bring their families with them, and must temporarily return to their home countries after finishing the program. This would technically prevent them from applying for permanent residency because one of the requirements is to have lived in Japan for ten years or more.

While Japan is already accepting more foreign workers, not everyone is comfortable with this change. “Many people in Japan believe that the country's peace and harmony is based on it being a homogeneous country where there are few foreigners,” says Chris Burgess, a migration researcher and lecturer of Japan studies at Tsuda Juku University in Tokyo, in an interview with CNN.

According to Burgess, underlying this belief is the so-called “foreign crime” debate, the fear that allowing in greater numbers of foreigners will harm public safety—a fear that has only been heightened in recent years by terrorist atrocities in Europe and other countries with high migration levels.

A recent poll shows that public opinion on this issue is mixed.

A public opinion poll conducted by the Nikkei found opinion evenly split about whether Japan should admit more foreign workers, with 42% agreeing and 42% disagreeing. However, age was a large determining factor when it came to how people voted. Roughly 60% of 18-29-year-olds were for increased immigration, while just 30% were against it. The opposite trend was found among those aged 70 or older, with 30% for and 45% against. Young people are perhaps more accepting of foreigners as they are the ones directly affected by population shrinking, and they have grown up with the effects of globalization.

In this video from Asian Boss, reporters hit the streets to find out how ordinary Japanese feel about the issue:

While some interviewees were resistant to the idea of hiring foreign workers, others identified a need for Japanese people to accept people of various nationalities and to become more open-minded. “The Japanese love Americans and accept them, but to people from other Asian countries, the Japanese tend to be unkind,” one young woman explained.

Whether Japan will become a truly multicultural nation any time in the foreseeable future remains uncertain, but it is clear that increasing globalization is already having an impact on the nation. As for how demographic changes will shape Japan, only time will tell.