In Syria, regime loyalists use art as a tool of war 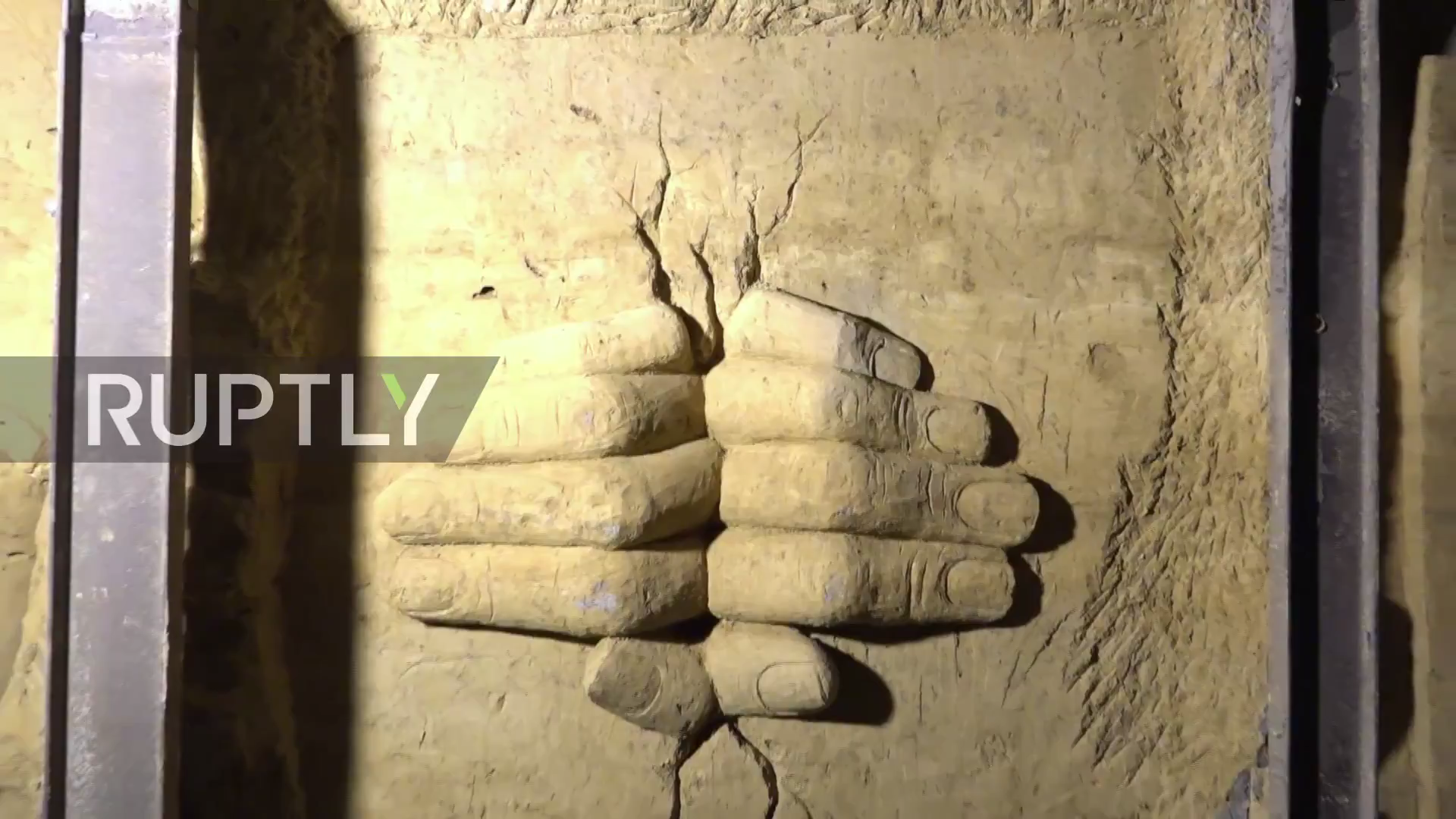 Group of artists turn tunnel dug by rebels near Damascus into an art gallery. Screenshot from a report by Kremlin media outlet RT. Source: Youtube.

The Syrian conflict has plunged the country into a vortex of death and destruction, and triggered a humanitarian crisis with little precedent, so much so that it seems inconceivable that any of this macabre reality can be associated with aesthetics.

Nonetheless, the warring sides have invoked aesthetic representations of the war — that have sometimes bordered on the romantic — in an attempt to get across tailored messages serving propaganda purposes. A military state has crept into forms of expression that are predominantly thought to be at variance with war and militarization. This has been evident in drama, art, fashion, pop music and other spheres. And nowhere has this been more blatant than in regime circles.

Since the early days of the revolution, the Syrian regime has idolized and romanticized a military state. At the entrance of Lattakia coastal province, the birthplace of the Syrian dictator, a gigantic military boot filled with flowers greets arrivals. Similar jackboots are scattered across areas under government control.

The Syrian regime's media has been keen to show lavish outpourings of affection for the Syrian military, with prominent figures and ordinary citizens shown ‘kissing’ the military boot in reverence as a token of loyalty and gratitude.

Syrian drama series’ and movies have tapped into ‘ready-made’ locations of destroyed neighborhoods resulting from government shelling that leveled entire neighborhoods, saving them a fortune in set design. Films such as ‘Rain of Homs‘ directed by Joud Said and ‘the Revolution Man‘ by Najdat Anzour have been criticized for polishing the regime's actions.

Many believe that these scenes ride roughshod over the feelings of the locals who have lost loved ones, lost homes or both, which is thought to further inflame sentiments in a country reeling from a devastating war. This is especially felt because these series seek to bear out the regime's narrative of events which blame the rebels for the city's wholesale destruction.

In October 2017, a loyalist Syrian fashion designer, Manal Ajaj, sparked controversy when she posed on the catwalk with models dressed in Syrian military uniforms during a fashion show in Beirut in what she said was a “homage to the Syrian army”.

Last month, Bashar Assad and his wife Asma visited an underground tunnel dug by rebels (who were branded as terrorists by the regime) after the Syrian regime's takeover of eastern Ghouta in April.

A group of Assad-supporting artists turned the tunnel into an “art gallery”, according to the Syrian state news agency.

In support of the artists’ work, Bashar Assad was quoted as saying:

Destruction, darkness and death are the culture of terrorists, while construction, light, life and art are our own.

In addition, a video of a Syrian soldier dancing to the tunes of a hit song on his way to Idlib province in northwestern Syria to fight opposition forces went viral. The loyalists touted the video as demonstrating the Syrian army's ‘high morale’ ahead of an imminent battle to eradicate a last major opposition stronghold in what is feared to be yet another bloodbath in the Syrian conflict.