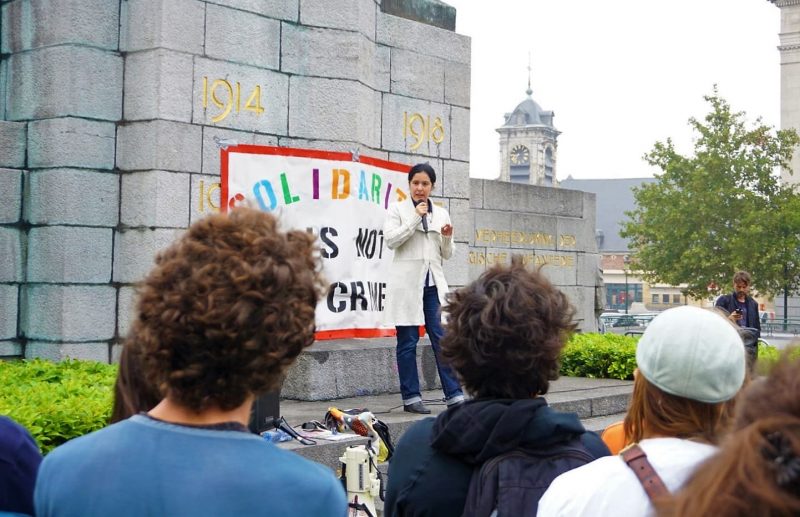 The September 6, 2018, trial of 11 people who have helped migrants in Belgium has attracted a number of protesters. Photo: Melissa Vida. Used with permission.

Eleven people who had been arrested and charged with human trafficking in October 2017 appeared in court in Brussels on September 6, the first hearing of a trial that activists say is yet another case of “criminalization of solidarity” in Europe.

The defendants have allegedly assisted 95 undocumented migrants, including 12 minors, to travel from Belgium to the United Kingdom last year, either by hosting them in their homes, by lending them phones and thereby indirectly helping them cross the channel.

On the day of the trial, three hundred people protested in front of the courthouse. Demonstrators say this is a political trial, aimed at dissuading people from helping migrants by establishing an intimidating judicial precedent.

The defendants are two Belgian journalists, one Belgian-Morrocan social worker, a Tunisian man who is a legal Belgian resident and seven people who are undocumented migrants themselves. Eight of the defendants have been in jail since the arrest.

Belgian law states that there must be a monetary transaction involved for an act to be framed as human trafficking, something the defendants deny ever happening. However, the relationship between the migrants and their helpers seems to fall into a legal grey area, raising fears that the law's scope is unjustly being expanded to target activists.

Myriam Berghe, one of the two journalists, said in an interview with RTBF (Belgium's public service broadcaster) that she's received money on behalf of a migrant she was hosting. The migrant in question had been sent money from abroad via Western Union, Berghe says, but had no way of collecting it due to having no papers. What for Berghe was simply an act of kindness, in the eyes of the authorities was payment for smuggling.

In the same interview, she explains that despite some of the people she's hosted being smugglers themselves, she wouldn't consider them “human traffickers”:

Yes, I've hosted smugglers. But you need to understand what is the reality we're talking about. The 12 people indicted in this case don't have anything to do with what the law calls “human trafficking.” They're clueless youngsters that try to survive by becoming small smugglers until they save up enough to cross the border themselves.

Bergue and Anouk Van Gestel, the other journalist, have written an open letter to the Belgian prime minister. In this excerpt, they express their dismay at the current state of Belgium’s democracy:

Is it acceptable that in a country that calls itself a democracy, two citizens are indicted for criminal association and human trafficking, with the aggravating factor that it involves minors, because they opened their door to people who were in total distress?

On the day of the trial, Selma Benkhelifa, one of the defense's lawyers, remembered how Interior Minister Jan Jambon has blamed the squatting of Maximilien Park, which is home for hundreds of migrants in Brussels, on the people who help them. She said:

It is a trial that is eminently political. Jan Jambon declared that the situation at Maximilian Park was the responsibility of the [migrants’] hosts. We first hear these very provocative declarations and afterwards we notice that there are real lawsuits that are filed.

This is only the latest event around border control policies that have deeply impacted European politics in recent years.

In Brussels, 10,000 people marched in February against anti-migrant government policies. In May, the death of a four-year-old Kurd asylum seeker at the hands of Belgian police caused widespread outrage. More recently, the government's reopening of a detention center for undocumented families also drew criticism from human rights workers.

People who have helped undocumented immigrants have also stood trials in other Europeans countries.

In France, helping undocumented migrants was illegal until June 2018. In Italy, a Spanish charity that helps migrant's boats stranded at sea is under investigation, while in Switzerland a pastor was fined €1,112 for hosting an undocumented Togolese migrant in his church.

In Spain, human rights activist and researcher Helena Maleno was charged with human trafficking after helping to save dinghies in the Mediterranean. Maleno says there are currently 45 lawsuits undergoing in different courts in Europe with people facing criminal charges after helping undocumented migrants. Maleno herself is still under investigation by the Moroccan authorities.