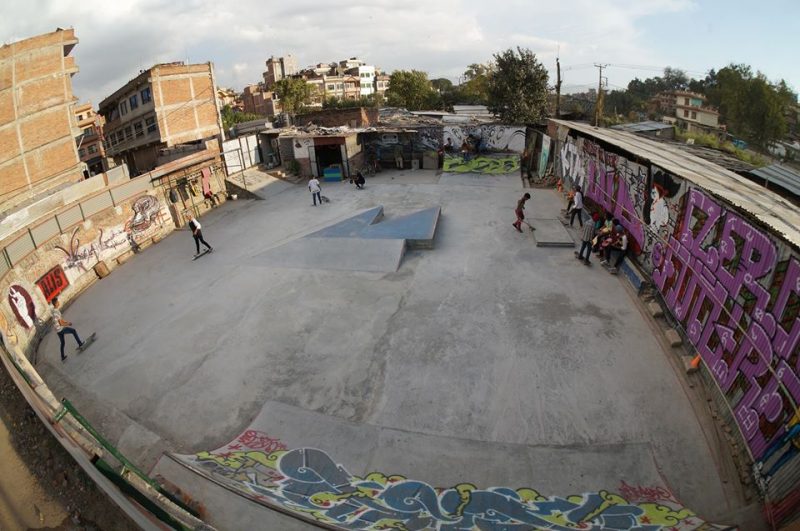 Amid the cramped buildings that dot the banks of Bishnumati River, a group of kids gathers to hone their skills at a sport still largely frowned upon by Nepalese society: skate.

It is in this small, concrete-lined plot of land that lies “Ktm Skate Park”, Kathmandu's first-ever skatepark. Running the show is Ujwol Dangol, a local skater who first jumped on the board when he was around 14 and since then has never looked back. In June 2018, he spoke to Global Voices about his projects and plans for the future.

Ujwol first felt inspired to open a skatepark in the Kathmandu Valley in 2014 after returning from a trip to Bangkok, where the skate scene has thrived for much longer. He first opened up a skate shop, then began collecting the ramps and materials for the park as well as working towards securing a location to build it. It all finally came true in 2016.

We struggled really hard to make this happen in real. Finally we have an amazing skate park in capital city which changed the lifestyle of many kids and make them stronger , confident & and more serious on skateboarding.#ktmskatepark pic.twitter.com/P3Kj1vtjpX

And here's a photo of Ujwol with his board:

The one and only first skate park of Kathmandu , Ktm Skate Park !!!

People come an visit !! Skate and have fun !!

Ujwol is now a central figure in the skateboarding scene in Nepal, where the sport has been slowly taking off. Despite its growing popularity around the world — even set to debut in the summer Olympics in 2020 in Tokyo –, in Nepal, it is still somewhat associated with drugs and criminality.

But Ujwol doesn't let that discourage him: besides organizing classes in schools, he also runs events to help popularize the sport around the country. Eventually, he would like to see skating a widely accepted sport in schools.

In 2016, he took two skaters to compete at the Asian Skateboarding Championship in Shanghai, China, and this year was the manager of the skateboarding team at the Asian Games in Jakarta (unfortunately neither competition produced any medals for Nepal).

Amid the skaters who frequent Ujwol's skatepark is Jitendra, whose disability doesn't get in the way of his passion.

Skater homie Jitendra is really cool guy. I met him 3 years ago and he was like shy guy. Slowly, he became very good and friendly person. He skates good. Happy to support him with this old school deck which he liked a lot. #skaterhomie #sponsorskater #helpinghand #supportingacause #supportingskaters #firstskateshopofnepal2015 #hamroskateshop #worldskate #worldskatenepal #nepalskateboarding

Ujwol frequently uses social media to showcase other skaters in the park:

Youths really enjoying the first ever skate park of kathmandu,

The Ktm Skate Park seems to be fuelling a skateboarding craze in Nepal, with some other skateparks popping up in different parts of the country — the Annapurna Skate Park in Pokhara is the latest addition to the list.