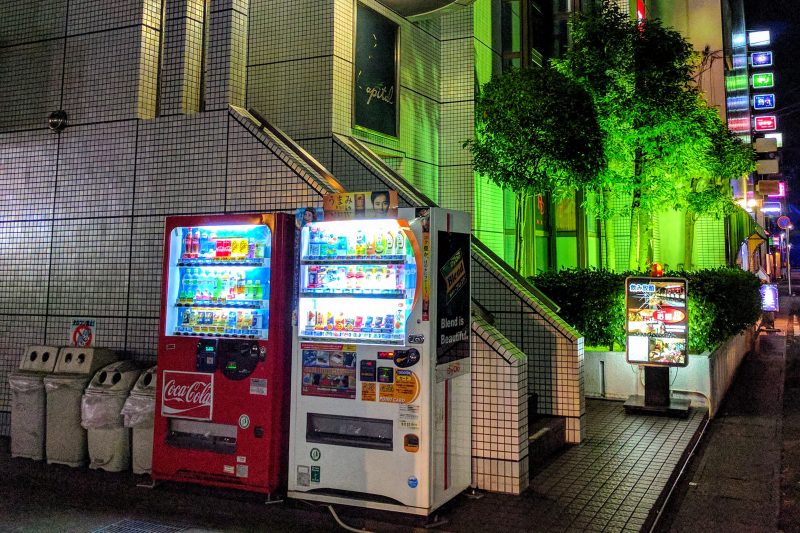 Japanese vending machines have long been famous for selling the most curious things, like flowers, umbrellas, and ties. But even with one vending machine for every 23 people and annual sales that exceed $60 billion, one can still be surprised at what comes out of their take-out port.

A first in Japan? Seems that way… It's a fresh-baked pizza vending Machine! (ha ha) I bet there's an old guy inside making them.

In the city of Hiroshima, residents have been abuzz over the appearance of a pizza vending machine located near local hangout TSUTAYA, part of a national chain of bookstores in Japan. The vending machine serves up two kinds of pizza: margherita (basil, mozzarella cheese, and tomato sauce) for about US$ 10 and four-cheese for about US$ 13 with a cooking time of just three minutes. TSUTAYA's parent company, which is behind the vending machines, hopes to eventually have other such machines at bookstores across Japan.

In the meantime, locals are pleasantly surprised by just how tasty machine-baked pizza can be.

The first of its kind in Japan! A fresh baked pizza vending machine. (^^)

Meanwhile, in Inashiki, a city located in the Ibaraki prefecture, about an hour by train northeast of Tokyo, one restaurant was found to have fully-functioning antique vending machines from the 1960s.

Along side the national highway at an old auto stop stands an old, nostalgic vending machine where you can buy bento boxes. For 300 yen (US$3.00), you can purchase a bento made by nearby store.

For 300 yen, travelers can purchase a simple meat-and-rice bento box with chopsticks. There are three types to choose from: fried chicken, pork cutlet, and grilled meat, with the last being the most popular choice.

Finally, hidden in the city of Kagoshima, on the southwestern tip of the island of Kyushu, lies a fresh crepe vending machine. It's located in Kagoshima's Tenmonkan shopping district, hidden near a bus stop and reportedly difficult to find.

Those lucky enough to find this most unusual of vending machines are treated to tasty crepes at the cost of 200 yen (about US$ 2).

The vending machine serves a variety of flavors of crepe, including chocolate cream, caramel, strawberry cream, and cheese. The crepes are delivered in a glass bottle, which customers are asked to return after they are done.

With this machine being a one-of-a-kind favorite, some users are wondering if other cities also have one of their own:

“This crepe vending machine is in Kagoshima, but does anyone else have one in their prefecture?”