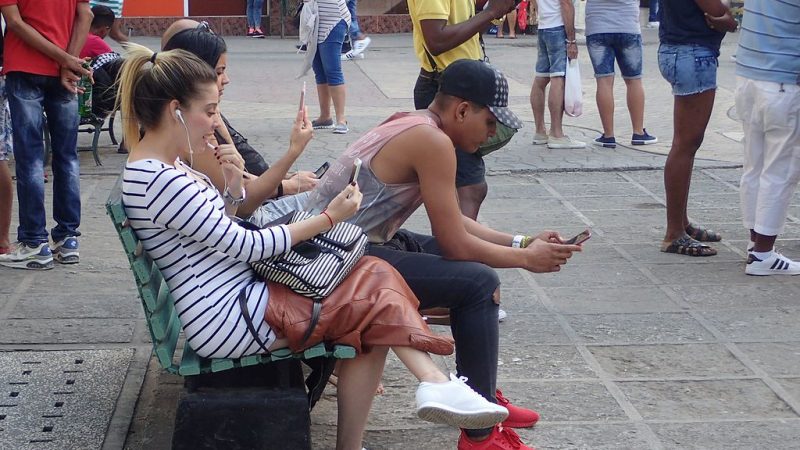 Cuba’s new Constitution is now the subject of government-backed public debates across the country. To encourage greater public participation several online tools were developed enjoining Cubans from all walks of life [2], including those living outside the country, to share their views and ideas about the proposed constitutional reforms.

Debates started on August 13 and will continue until November 15 of this year, after which the changes considered pertinent will be made and placed for a vote.

One of the most common takeaways brought to this project is the elimination of communism as the main basis of the state ideology, and also Article 68, which posits that marriage is the union between two people [3] with the legal capacity to do so. This last one, in particular, assumes the legal union between people of the same gender, which has been understood by many as a green light for marriage equality.

One of the tools in place is a space inside the web portal “Nation and Emigration”, [4] put together by the Ministry of Foreign Affairs of Cuba. 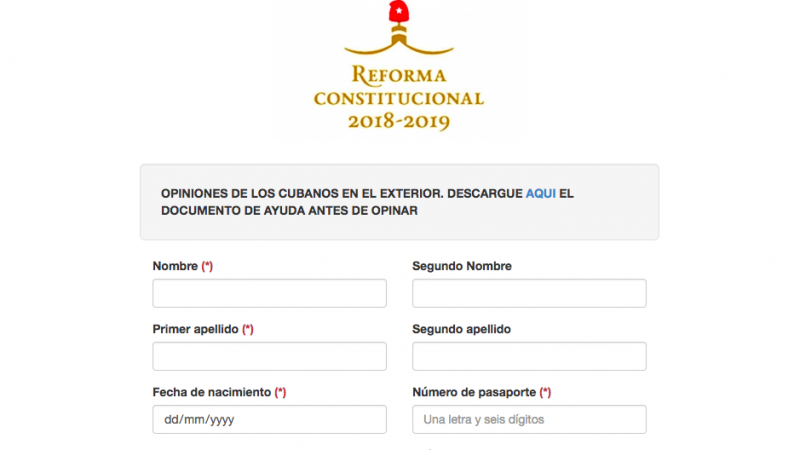 Screenshot of the online space to share opinions and observations through the government's platform. The page contains the project for the new constitution and the application seen in the image has a link to a help document guiding the user to submit his data and his opinion.

The digital platform started functioning [5] in early September. The site contains articles and documents guiding the users through the process and an online template [6] in which users are able to send their comments and observations. However, civil society couldn't wait until the section was opened and turned to social networks to begin the debate on pages hosted on Facebook or under articles from online media sources such as Granma [7] or Cubadebate, [8]both managed by the Cuban government.

But in order for these informal exchanges to have a common space, university professor and Doctor of Science, Yudivian Almeida, who was once a blogger and participant in the Bloggers Cuba [9] project, developed an online tool to be able to comment in an organized way on the articles of the proposal.

This tool is part of the website of the Postdata Club [10] project, directed by Almeida, and it functions through Disqus [11], a tool to host and manage comments on blogs and online communities.

Interviewed by journalist Milena Recio for Oncuba Magazine [12], Almeida explains that the main content available on the site is supported by technologies that use web-based hosting services [13], which means that people can still have access to it in their digital devices, even when disconnected from the internet. This, he says, is very useful to Cubans who have limited internet access inside the island and is also what makes this project so unique, as it allows access to the text of the new Constiution to compare it with the current one. 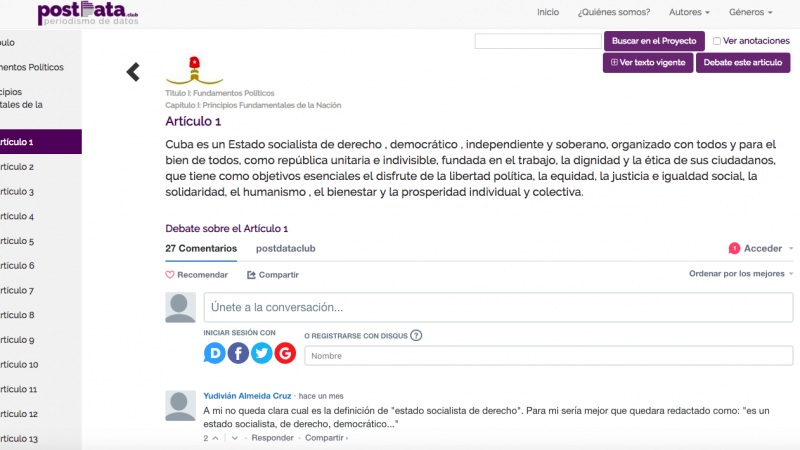 Screenshot of PostData devoted to the debate on the project for the new Constitution. On the left, users can access the different articles that they can read in the middle of the page. The debate, powered by Disqus, can be seen at the bottom of the image. Each article displays a different space for discussion, similar to the comment spaces in blogs and other Web 2.0 tools.

In addition, the tool can be used equally by those within the national territory as well as those who reside outside the island. For many people who are involved in the exchanges that are already taking place online, participation in the consultation process with Cubans living abroad may lead to consideration for them to be able to vote.

Almeida also explained that it is a simple tool that does not seek to substitute the exchanges encouraged by the government, and that it will continue to develop as participants use it:

In a space like this no one has to ask to speak up, there is no schedule for debate. Everyone can engage in the debate right when they think of solutions, questions, or approaches. It is beyond the conditions of place and time held by a public consultation.