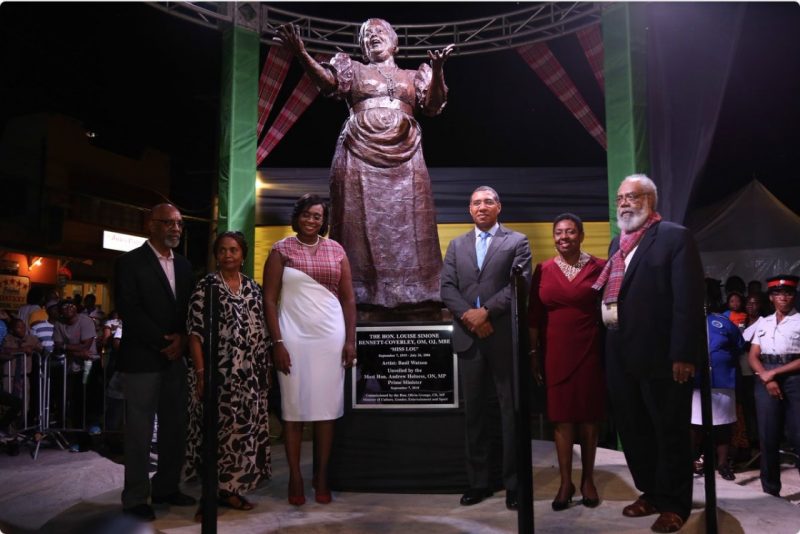 A screengrab of an official photo from Jamaica's Ministry of Culture, Gender, Entertainment and Sport, capturing the unveiling of the statue honouring poet Louise Bennett-Coverley, posted on Twitter by Robert Nesta Morgan. Present at the ceremony were Prime Minister Andrew Holness and his wife, who is the Member of Parliament for the area, as well as Miss Lou's son.

Gordon Town, small, picturesque, and unpretentious, is nestled on the Hope River just outside Kingston, tucked between steeply sloping foothills. Travellers, who often pass through the town square on their way to the Blue Mountains, now have a reason to stop and take a look: Gordon Town was also the home of Louise Bennett-Coverley — fondly called “Miss Lou” — poet, folklorist, comedian, and above all, defender of the Jamaican language. On September 7, 2018, on what would have been her 99th birthday, residents, cultural activists, and government officials alike were proud to witness the unveiling of a statue in her honour in the town square.

Unlike other depictions of respected national figures, the statue won the approval of the Jamaican public; there are now plans to build a small museum and rename the square Miss Lou Square.

Diaspora writer Geoffrey Philp tweeted his reaction to the statue in Jamaican Patois:

Now that is what a statue is supposed to look like! Not a little weak, ineffectual, toothless person who looks as if he/she couldn't squash an ant.

While government officials waxed lyrical about the unveiling of the statue on social media, university researcher Deborah Gordon Hickling asked about the availability of Bennett-Coverley's work locally, even though a Deed of Gift was signed earlier in the week, handing over a collection of her work to the National Library of Jamaica:

I gotta ask, where in Jamaica has her work been curated in a place that Jamaicans can readily walk into and see and hear everything Miss Lou? Where can the documentary testament to her life’s work be seen? […] Where are audio tapes, the interviews to be publicly heard and celebrated? In Canada, McMaster University has a room of her work. Where can we see curated work about her groundbreaking, foundational, identity-forming work in Jamaica Welfare? Her social interventions that built pride and awareness of who we are.

Miss Lou always was much more than a lovable exponent of Jamaican culture. Her cheerful personality and comedic performances belied the serious intent of her work, which was to promote and popularise Jamaican Patois, a language that had been scorned throughout the colonial era:

Louise Bennett-Coverley (7 September 1919 – 26 July 2006) Jamaican poet, folklorist, and educator, born 99 years ago today. She wrote and performed her poems and folk songs in patois, preserving and popularising our nation's language. Miss Lou paved the way for all who came after. pic.twitter.com/3aZGcoOV8V

Bennett-Coverley emerged at a time when it was particularly important for Jamaica to establish its national identity; however, more than fifty years after Jamaica's independence from Great Britain, Jamaica is still reluctant to fully embrace Patois. Broadcaster and educator Fae Ellington, a lively exponent of the language, recorded her thoughts on Miss Lou's birthday on both YouTube and Facebook:

It's September 7, Dr. The Honourable Louise Bennett Coverley would have been 99 today.
#Patriot
#Nationalist
#SocialCommentator
#Actress
#Poet
She reminded me that, ‘You have to laugh to cover your heartburn (pain). True words.’

In Jamaican parlance, Miss Lou was skilled in the Jamaican art of “tek serious ting mek joke” — creating humour in a serious situation. As writer Claude Mills put it:

Underneath her wily […] comedic style, she forced the society to face unpleasant truths about itself through the multi-hued, multiracial colours in her verbal palette. But it is the bold, proud, unapologetic championing of the use of the Jamaican language internationally that so endeared her to many Jamaicans.

But Bennett-Coverley was not dogmatic in her approach. In a 2016 presentation at the National Library, Professor Mervyn Morris pointed out:

Miss Lou was trying to redress cultural imbalance by enhancing respect for Creole. She did not favour ‘so-so English’ [‘only English’]. […] She did not hesitate to speak and write in English as well as in Jamaican Creole. She was comfortable in both.

Miss Lou's work resonated far beyond Jamaican shores. One of her best-known poems, “Colonisation in Reverse”, was a wry commentary on the influx of Caribbean immigrants to the United Kingdom in the 1950s and '60s. A member of the diaspora herself, Bennett-Coverley introduced Canada — where she lived for a number of years — to Jamaican Patois, and her influence in her adopted country was considerable.

Miss Lou has received numerous honours and awards, of which the statue in Gordon Town is the latest tribute. However, some Jamaicans believe this is not nearly enough to honour her. Cultural activist Professor Carolyn Cooper is among those who believe Miss Lou should be made a national hero. During a heated debate last year, sparked by a young dancehall star's comments that were widely perceived to disrespect Miss Lou's legacy, she observed:

Louise Bennett's mission was essentially about black power. She said, ‘When I was a child, nearly everything about us was bad, yuh know; they would tell yuh seh yuh have bad hair, that black people bad, and that the language yuh talk was bad. And I know that a lot of people I knew were not bad at all — they were nice people and they talked this language.’

The lasting insult to Miss Lou is […] our continuing refusal to acknowledge the power of our Jamaican language. At home and in school! The Ministry of Education must ensure that every child is able to learn in his or her home language. It's a human right. That's one of the ways in which we will continue to honour Louise Bennett for generations to come. And while we're at it, we should just officially recognise the fact that Miss Lou is a national heroine.

Whether Miss Lou does acquire official status, or is simply regarded as a cultural legend, it appears that Jamaicans are acquiring a deeper appreciation of the significance of her work and the importance of language as the most fundamental expression of culture.