It is women who bear the brunt of the Venezuelan crisis 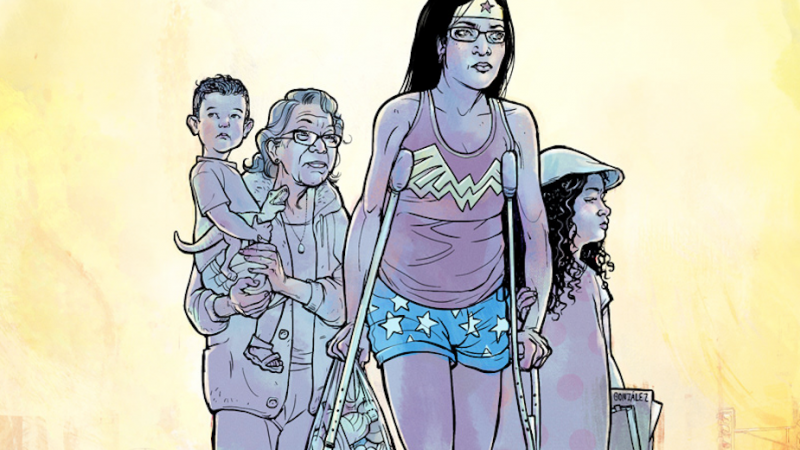 “Introducing Patricia, my sister, the real Wonder Woman. Single mother of two, taking care of business with a broken ankle for nine months. Amidst the protests and chaos in Venezuela, our father's death, and her being unable to work, she is still kicking more ass than anyone I know. Mad respect for the lady. Compared to her, I'm a pussy.” Illustration and caption by Venezuelan artist and illustrator Leonardo Gonzalez, used with permission.

There is one aspect of the Venezuelan economic crisis that often goes untold: how it impacts women and girls.

With 44 percent of the country's households headed by women, it is they who usually suffer through the long supermarket queues, who endure the crippled health care system when their loved ones fall ill, and who mourn the death of the children at the hands of the police — all while surviving the grim statistics that afflict their gender.

While it is true that the Venezuela government has had policies aimed at easing female poverty, many other aspects of female autonomy have been neglected by the Bolivarian government, despite it often proclaiming itself to be “feminist”.

Income transfer programs like Madres del Barrio (“mothers of the slum”), from 2006, and Hijas e Hijos de Venezuela (children of Venezuela), from 2011, have created a crucial safety net for families living in extreme poverty. Combined, both programs hand out between 150-350 USD, depending on the number of children.

Abortion, on the other hand, was made illegal in Venezuela's Bolivarian Constitution, inheriting its status from the country's previous political order that the Bolivarians had otherwise upended. Neither Chávez or Maduro have made efforts in modifying this in their 20-year-long tenure. Abortion remains allowed solely in cases of maternal life.

Aglaia Berlutti, a prominent feminist online voice and Global Voices contributor, highlights the contradictions of Chavismo's rhetorics when it comes to gender equality:

In Venezuela the term ‘feminism’ has been consumed, abused and above all, distorted by [those] in power. […] While they speak about political representation, president Nicolás Maduro uses sexist terms to insult minorities […] While they insist that the number of female ministers in the executive branch surpasses that of any other country in the continent [women continue] to endure situations in which their gender identity continues to be crushed by the historical interpretation that devalues them.

Previously-existing problems not only failed to be addressed: with a raging economic crisis, they have been dangerously aggravated.

Venezuela's femicide rate is now among the 15 highest in the world, according to three local rights monitoring organizations. Several cases of sexual abuse against women by law enforcement authorities have been reported during the 2017 protests.

Venezuela's murder rate in 2016 reached 56 per 100,000 people — the highest in South America. This is according to the UN Department on Drugs and Crime (UNDOC), who publishes yearly worldwide data series on homicide rates. The Venezuelan Observatory of Violence (OVV), who uses a different methodology, counted a rate of 89 in 2017, which would make Venezuela the most murderous nation on Earth.

Also according to OVV, in July 2018, 40% of the crimes in the greater Caracas were committed by police officers.

With both crime and police violence escalating in the last years, many women mourn the deaths of their children. Speaking at La vida de nos (“the life of us”), an online media project collecting personal accounts of the crisis, Elibeth Pulido recounts the murder of two of her children, one of them by a police officer:

Half an hour later they called to tell me to come fetch the children. I felt as if my heart was going to burst when I saw them and they saw me. The glances we exchanged were unbelievable. We had never looked at each other that way! They were barefoot and shirtless […And then] they gave me the most horrifying news of my life. It happened again: they took another child from me.

Additionally, the chronic lack of sexual education in schools, combined with the poor access to contraceptives as an effect to the country's drug shortage, translates into high numbers of unplanned pregnancies. Adícea Castillo, researcher and founding member of the Women Studies Center of the Central University of Venezuela, explains:

There's a number. Small but important, of pre-adolescent mothers […] It's a vicious circle. Many of these young women don't use contraception, they have [unsafe] abortions. They die after eight months in the hospital for an infection, and those who survive, come back home to the slums to take care of a child without parental support.

Finally, women leaving the country also face hardship. The number of Venezuelan women who have been victims of human trafficking in Latin America and Europe has quadrupled between 2014 to 2018.

In neighboring Colombia, a country that has received over a million Venezuelans in the past year, women are subject to prejudice and abuse. While many accuse Venezuelan migrants of “stealing” local jobs and engaging in crime, women are often seen as sex workers.

To confront many of those misconceptions, the feminist Youtube channel “Las igualadas”, made a special episode in the Colombian border town of Cúcuta about Venezuelans (in Spanish, no English subtitles).