Firefighters tried to put out the fire at the National Museum for hours. The lack of water was a problem | Image: Screenshot from Felipe Milanez's Facebook live

Brazilians were left heartbroken after the National Museum, the country's oldest and arguably its most important, guardian of Latin America's largest natural history and anthropology collection, burned to the ground on Sunday, September 3, in a fire that raged throughout the night.

The National Museum was founded in Rio de Janeiro in 1818 by the then king of Portugal, D. João VI. It was housed in a palace of around the same period. The site had been the residence of the Portuguese and Brazilian royal families until 1889. It's also where Brazil's first National Constitutional Assembly was held.

Over its 200 years of history — the museum's anniversary was celebrated just in June this year — it assembled a collection of around 20 million items. While a complete list of destroyed items is yet to be released, treasures such the eldest human fossil found in the Americas, pieces from ancient Egypt and the original letter that abolished slavery in Brazil in 1888 have all been confirmed lost.

Some people, including the museum's staff and scientists, risked their own lives by breaking into the blazing building to retrieve some of the items.

While the number of visitors had been dwindling every year — more Brazilians visited the Louvre in 2017 than the National Museum –, online reactions following the news of the fire were plenty.

Journalist and professor Felipe Milanez live-streamed the museum as the fire was raging:

One Twitter user posted a long thread, with images, of what might be lost in the fire:

Yoruba people. Mask of the female secret society Gelede, no date. And there is still the building itself

A video posted by the facebook page Realidade Simulada gives an aerial view of the museum as it was before the fire:

The price of not caring

After the tragedy, people remembered how the authorities have neglected the National Museum for years. The museum is managed by the public and increasingly underfunded Federal University of Rio de Janeiro (UFRJ).

Luísa Nunes, a student of the university, remembered on Twitter that this was the sixth major fire in UFRJ's buildings since 2011.

These are the buildings in the custody of UFRJ that have suffered episodes of fire in the last decade.

The state of Rio de Janeiro is also slumming through an unprecedented budget crisis: there have been ongoing cuts in public services civil servants’ salaries, including firefighters. The two hydrants nearby the museum were dry, so firefighters had to improvise by pumping water out of a nearby lake, losing 40 minutes of work in the process.

The museum's annual budget, of around 500,000 reais a year (125,000 US dollars), has suffered significant cuts over the past four years, local newspaper Folha de S.Paulo revealed in a story from May 2018. Twitter user DanPimpao posted a graph showing how much have been cutted from the museum's budget since 2013:

Budget of the National Museum from 2013 to 2018. Analyze yourselves and draw your own conclusions. 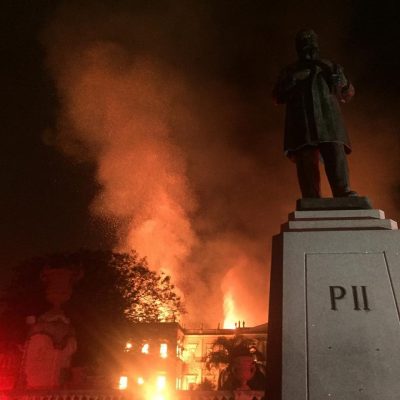 The museum on fire. Image by Felipe Milanez, used with permission.

On its 200th anniversary, its management launched a crowdfunding campaign to to reopen a relevant collection room, where was the skeleton of the Maxakalisaurus, the first large dinosaur assembled in Brazil. 58 thousand reais were collected from the initial goal of 30 thousand reais – however the ideal would be to raise 100 thousand reais.

This year, the government's total investment in the National Museum equals a quarter of what each Congressmen's budget to hire advisors.

A Twitter user compared the amount with other government expenses:

The annual budget of the National Museum corresponds to: – 30 ‘of electoral propaganda

- the cost to change the Senate's carpet 3 years ago.

The museum was just about to receive extra resources National Bank of Economic and Social Development from to implement a fire-safety plan. The first installment was due in October.

journalist Breiller Pires summed up the sentiment that took over Brazilians watching the building burn with little to do:

The fire of the National Museum is the merciless metaphor of a country that disparages science, knowledge and, above all, history.