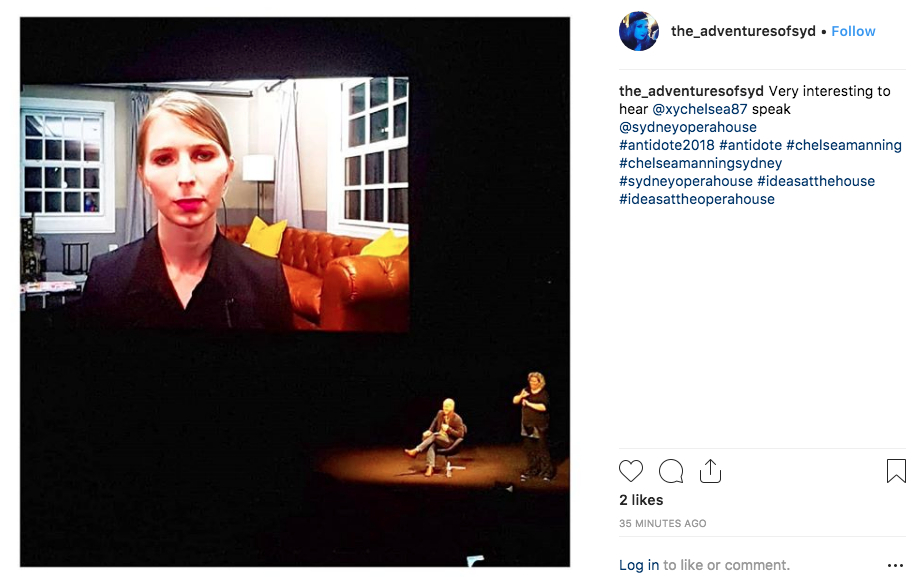 Former American soldier turned whistleblower and activist Chelsea Manning spoke at the Sydney Opera House on Sunday, September 2, via video link, after Australian authorities announced it wouldn't make a decision on her visa application in time for the event on “character grounds“.

Meanwhile, New Zealand, where she is scheduled toappear at events on September 8 and 9, has cleared Manning to apply for a work visa. In a public statement, the immigration department said Ms Manning has not reoffended since her release from prison and that the likelihood of her offending while in New Zealand was considered low.

Ms Manning was convicted to 35 years in prison in 2013 after leaking almost 750,000 confidential military documents to Wikileaks, obtained in her role as an intelligence analyst for the United States Army. In 2017, ex-president Barack Obama commuted her sentence.

Ms Manning is also scheduled to speaking engagements in Melbourne and Brisbane on September 7 and 11 respectively. It isn't clear whether the home affairs department will make a decision in time for Ms. Manning to appear in-person at those events.

The Morrison/Dutton government must think we live in the Stone Age if they think denying Chelsea Manning a visa means Australians don't get to hear her opinions.

The subject has drawn heated debate in both countries over the past couple of days.

Human rights advocates in Australia have attempted to stop her from being barred. The Castan Centre was among these:

American activist @xychelsea should not be banned from entering Australia to give a series of public lectures. That's why we'll be writing to the Department of Home Affairs tomorrow. #FreeSpeech

Many believe that it has more to do with politics than with genuine security concerns:

The Australian Government is well within its rights to question whether someone convicted of espionage, dishonourably discharged from the US military and whose reckless actions while deployed on operations were described by a judge as dangerous to others should enter the country, let alone be paid for her appearance. Manning is not, and never has been, a whistleblower. She is someone convicted of espionage who was given a long prison sentence.

This is actually outrageous. Hatemongers and racists like Lauren Southern and Milo are apparently fine, but a hero like Chelsea Manning is considered a threat. Fuck this government. Let Chelsea Manning visit Australia – Sign the Petition! https://t.co/rovUhRpAkm via @ChangeAUS

Far-right activists Lauren Southern, a YouTube personality from Canada, and Milo Yiannopoulos, a British political commentator, have been granted visas for speaking tours in Australia in 2017.

Opposite outcome in New Zealand

A similar debate had brewed in New Zealand over the past week as members of the opposition National Party have called for Chelsea Manning to be barred from entry for speaking engagements there.

The National Party didn’t take long to show themselves as hypocrites on freedom of speech. Michael Woodhouse’s call to deny Chelsea Manning a visa to enter New Zealand shows that his party is willing to clamp down on political freedoms based on the politics and ideologies of the individuals involved.

The right to freedom of speech has been the central plank for those supporting her New Zealand visa application. However, accusations of hypocrisy have been thrown around on both sides of the debate.

Referring to earlier cases, Martyn Bradbury has attacked people from both ends of the political spectrum for hypocrisy. He argues at the progressive website The Daily Blog:

“It’s only free speech when we agree with what you are saying”, isn’t of any value to anyone.

Watching the Woke Left & Feral Right contort themselves into impossible positions over free speech when they both held polar opposite stances barely a month ago would be hilarious if it weren’t so fundamental to us as a democracy.

Twitter user Stu, on the other hand, blames the spooks:

Australia and New Zealand are members of the Five Eyes intelligence alliance that also includes Canada, the United Kingdom and the United States.

Golriz Ghahraman says that the Green's are standing with Chelsea Manning and her right to come to NZ to address a meeting. This is the same @golrizghahraman who opposed two Canadian alt right speakers from speaking at a public meeting. Her hypocrisy is astounding.