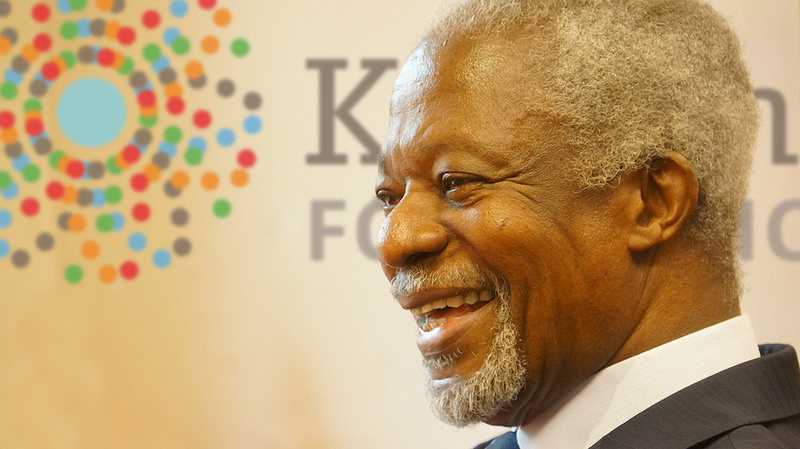 Kofi Annan, portrait by the Kof Annan Foundation, 2015, used with permission via Attribution 2.0 Generic (CC BY 2.0)

The people of Timor-Leste (also known as East Timor) join the world in mourning the death of international diplomat Kofi Annan who died in Switzerland at the age of 80 on August 18, 2018.

Annan left a legacy of global peacemaking during international crises that defined the post-Cold War era. His peacekeeping efforts in Timor-Leste are often forgotten, but in the small coastal capital city of Dili, candles were lit for the former United Nations (U.N.) secretary-general who had negotiated peace in the nation following two decades of violent occupation from Indonesia that began in 1975.

Timor-Leste is part of a Southeast Asian archipelago comprised of roughly one million people who gained independence from Indonesia in 1999 and joined the U.N. in 2002.

Dozens of Timorese conducted candle light vigil in remembrance of former UN Secretary General Kofi Annan who passed away 2 days ago and his contribution to the Independence process of East Timor during his time at UN. Thank you Mr Kofi Annan and May his soul rest in peace in heavenly God’s Kingdom.

Outside Timor-Leste, tributes for Annan flooded news outlets and social media. However, some called out Annan's missteps in foreign affairs when he served as the head of U.N. peacekeeping, citing the war in Iraq and atrocities in Rwanda and Bosnia.

Annan as a peace negotiator in Timor-Leste

In 1975, the Indonesian military invaded Timor-Leste and occupied the region, imposing Indonesian language and culture. They silenced all dissent, leading to atrocities such as the Santa Cruz massacre in 1991 when 250 East Timorese pro-independence peaceful demonstrators were shot to death.

Throughout the occupation, the Indonesian military separated roughly 4,000 children from families in the resistance, taking the children as a way to “weaken and humiliate” their enemies.

Fifteen years of peace talks had amounted to nothing until Annan took the U.N. helm in 1997 and pledged to resolve the crisis in Timor-Leste. By August 1999, Annan and Indonesian president B.J. Habibie were speaking daily, according to historian Geoffrey Robinson's book If You Leave Us Here, We Will Die: How Genocide Was Stopped in East Timor.

On September 4, 1999, Annan talked late into the night with Habibie, who was putting up a fight against Annan on the other side of the world.

The week before, Annan and Habibie had negotiated an independence referendum that shocked and angered the Indonesian military. After 24 years of brutal occupation, nearly 80 percent of Timor-Leste voters had voted for full independence from Indonesia.

Annan knew he could not operate a peacekeeping mission without Habibie's consent and contacted world leaders to put pressure on Indonesia. Annan secured support for an intervention alongside Australia on September 12, 1999.

Habibie eventually accepted the referendum results and pleaded for peace and security, but his government lost control of the military, and reports of massacres poured in throughout Timor-Leste.

Three hundred thousand people fled into West Timor, but thousands of people died in assaults around the country, including the deaths of 200 people in a single day inside the Suai Church in the southwest region.

Annan ensured a U.N. intervention with support from Australian troops who restored calm on the island. Even after establishing stability, Annan insisted on peacekeeping forces in the country for nearly three years, delaying Timor-Leste's independence until May 10, 2002.

Historian Robinson asserts that Annan's humanitarian intervention in Timor-Leste was pivotal in securing the island's safety and stability.

Reflecting on the politics of intervention

During Annan's tenure as the head of U.N. Peacekeeping, he says that Timor-Leste and the simultaneous conflict in Kosovo (1998) demanded a serious reflection on the politics of intervention. In his memoir Interventions: A Life in War and Peace, he wrote:

…the world had confronted two separate crises – Kosovo and East Timor – that had triggered a global debate on intervention and sovereignty, the rights of peoples and the responsibilities of states. I have combined my own intense diplomatic engagement on both crises – with the UN playing a central role in the case of East Timor – with a determination to reframe the question of intervention, and restore the United Nations to a central place in setting the boundaries of what states could do within their borders.

By contrast, soon after he took office Annan contacted the governments of Portugal and Indonesia, and informed them of his desire to use his good offices to help find a solution to the question of East Timor.

She emphasizes how Annan's bold leadership in Timor-Leste stood out as the most successful in his career:

In contrast to Annan’s own much-regretted reticence during the Rwanda and Srebrenica massacres, when as Head of the UN Department of Peacekeeping Operations (DPKO), and then as secretary-general, he submitted to the ‘institutional tendency’ of the UN Secretariat to ‘follow rather than lead the Security Council’, the Secretary-General’s office was at the heart of intense international diplomatic efforts to coerce Habibie into accepting an international force in East Timor.

José Ramos-Horta, former president of Timor-Leste and co-recipient of the 1996 Nobel Peace Prize, last week praised Annan for his work in Timor-Leste.

The East Timor & Indonesia Action Network, an organization that continues to advocate for reconciliation from decades of violence and occupation, expressed its lingering dissatisfaction with unresolved conflicts:

Former #UN SG Kofi Annan died today. Nobel Peace Prize cited his efforts for #Timor in 1999. https://t.co/HoXOTjcNf8 However, his pledge on behalf of UN of justice and accountability for crimes agt humanity committed by Indonesia and others remains unfulfilled. pic.twitter.com/0HdsizLOYa