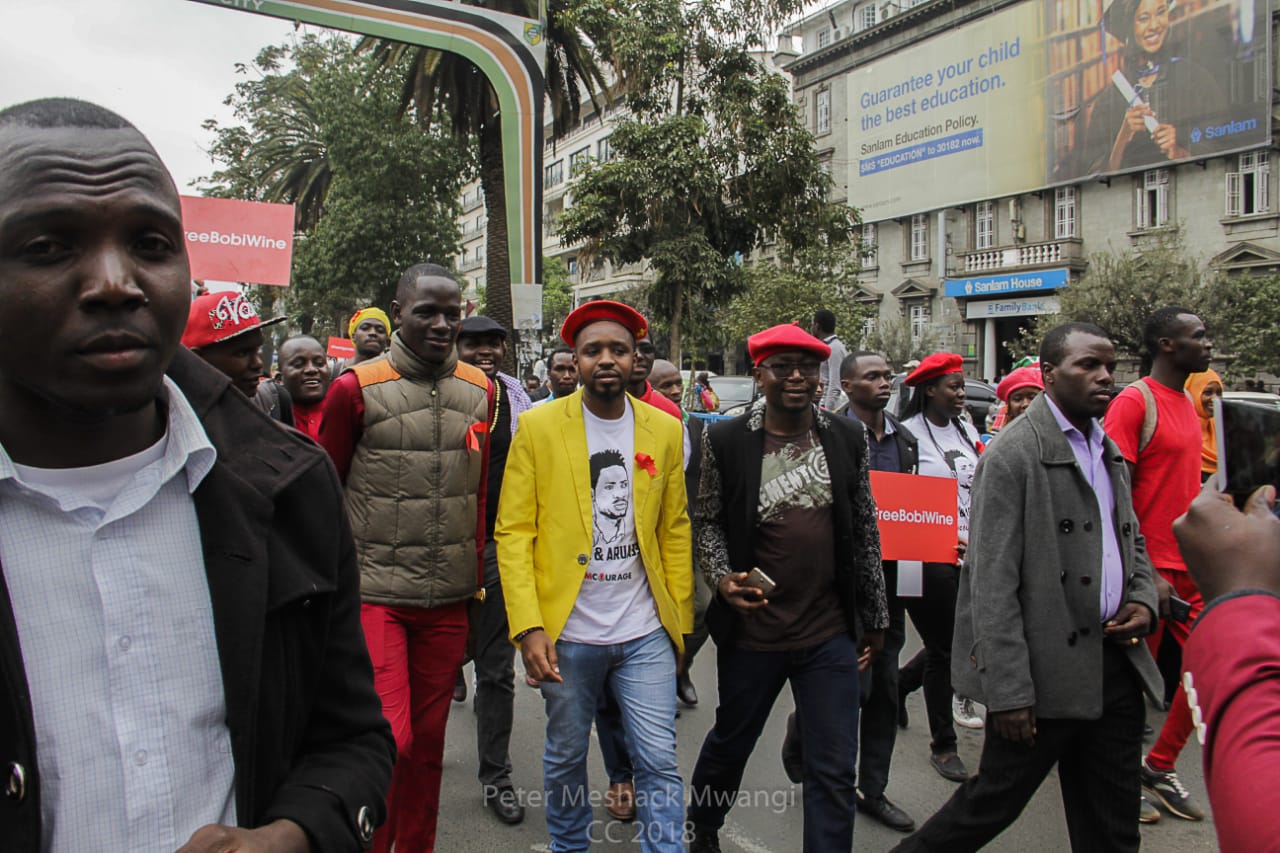 Bobi Wine was in Arua campaigning for independent candidate MP Kassiano Wadri when supporters of Wadri — who claimed victory over a pro-government candidate in a tense by-election — allegedly stoned a government convoy.

While Bobi Wine was not present during the incident, he was still targeted, arrested, and reportedly tortured by police:

EARLIER: Hon. Kyagulanyi at the Gulu Magistrates court appeared to be in excruciating pain while being assisted to walk and sit. He was charged with treason and remanded to Gulu Main Prison until 30th August. #NTVNews [3] https://t.co/MZkaLHTm7m [4] pic.twitter.com/nCnhCrPfYB [5]

In court on August 23, Bobi Wine appeared frail on crutches and required assistance to walk. He was also seen crying having traveled from a military detention center in the capital city of Kampala back to Gulu, some 335 kilometers away:

UPDATE: General Court Martial sets @HEBobiwine [7] free, @PoliceUg [8] re-arrests him minutes later while walking out of the court. He'll be driven to Gulu Chief Magistrate's Court where he will be charged with #treason [9]. We'll seek his release on bail at the court.#FreeBobiWine [10] pic.twitter.com/6oyhH8QNYU [11]

The extent to which violence is escalating in this country is worrying and we should all be concerned. We need to reflect on these matters and find a way forward.

Before his arraignment on August 23, Bobi Wine wrote an emotional letter to his family, stating, “I'll be home soon.”

After last week's protests, security patrols in Kampala have increased.

Kiwatule/Najeera road under "surveillance or intimidation"

Leading opposition leader Dr. Kizza Besigye was arrested in Kampala as tensions grew in the build up to Bobi Wine's court appearance.

Every way out of my home is barricaded since very early today. The intention is to deny us freedom to move & to be at the Military Court where @HEBobiwine [7] is to be produced this morning.
The struggle for freedom &sovereignty won't be blocked! Museveni Must Go.@PGovUg [20] @ntvuganda [21] pic.twitter.com/3AbXlChF0n [22]

Widespread attacks on journalists attempting to report on recent election violence have been met with condemnation.

We urge the police to immediately and unconditionally release @ntvuganda [21] journalist @zziwaherbert [24] & correspondent Ronald Muwanga. Journalists have a right to gather & report news. Targeting of journalists in #Arua [25] for doing their job is very concerning. https://t.co/trDXacrPlL [26]

Reuters photojournalist James Akena's beating and arrest by soldiers in Kampala has sparked outrage. Human Rights Watch [28] warned that these actions “curtail the public's access to information — information they could use to question the government's policies.”

In this video, Ugandan police are seen pouncing on Akena while he was attempting to report from the streets of Kampala:

Artists of all stripes rise up

Beyond the streets, Ugandans have expressed their outrage through the arts. Musician Pallaso released a song “Free Bobi Wine” that was heard throughout Kampala's suburbs last week:

Nshuti S. Mbabazi performed [29] Bobi Wine's “Situka”, a song he did shortly before the 2016 presidential elections.

Over 80 influential people including Angelique Kidjo, Femi Kuti and Wole Soyinka signed a petition [30] demanding Bobi Wine's release, medical treatment, and an investigation into his arrest.

In Nairobi, Kenya, the activist group PAWA254 organized a solidarity concert on August 22:

Cartoonists in Uganda and the East African region meanwhile have been commenting on current events in their own unique style.

Kwizera Alex drew [39] Ugandan President Yoweri Museveni as a young man staring in the mirror only to see Bobi Wine in the reflection: 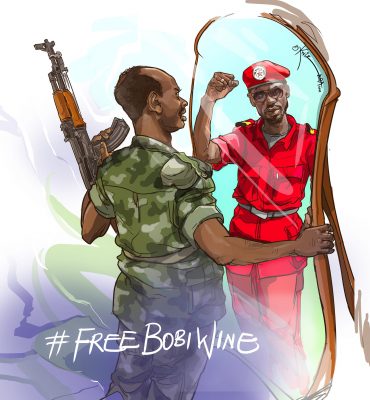 Jim Spire Ssentongo, the editorial cartoonist for The Observer, drew out the complexities of power:

Tanzanian political cartoonist Gaddo based in Kenya weighed in:

Ugandan comedians came out in unison to denounce the treatment of Bobi Wine:

We the comedians of Uganda ?? condemn the torture and persecution of @HEBobiwine [7] #FreeBobiWine [10]
Share our pictures in your various social media platforms. Thank you ?? pic.twitter.com/yKp1hZcc6v [45]

In Nairobi on August 23, protestors chanted for change with Bobi Wine's songs played in the background and delivered a petition to Kenya's parliament:

Other protests have taken place in Washington D.C. (United States), Germany, the Netherlands, and Japan.

After being forced to taste political defeat by Bobi Wine and his allies, Museveni's regime will no doubt attempt to bury the emerging opposition in legal battles.

While this tactic has been effective in the past, only time will tell whether it will work again now that new faces have breathed fresh air into the Ugandan political scene.