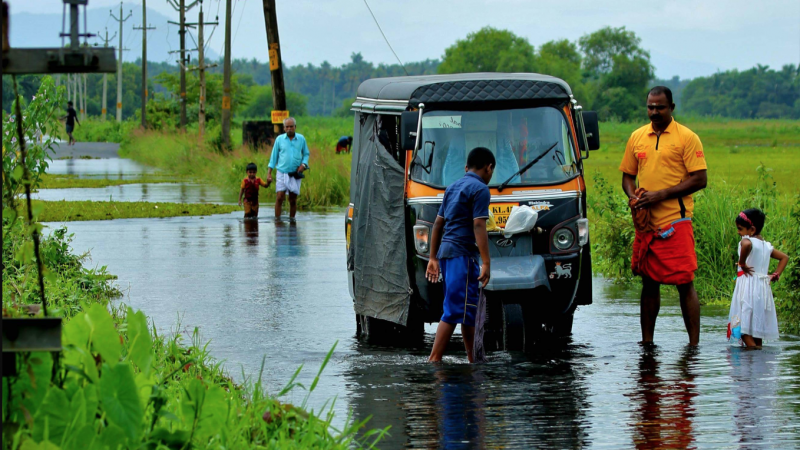 Flood waters started to rise in Kerala during the third week of July 2018. It has now reached disastrous proportions. Image via Wikimedia Commons by Mini Anto CC: BY-SA 3.0

The South Indian state of Kerala [2] on the Malabar Coast [3], known for its lush landscape, coconut trees, and inspiring backwaters, has been hit with unusually high amounts of rainfall during this year's monsoon season, causing severe floods [4] and humanitarian crises in the region.

While Kerala officials continue with rescue and relief efforts, Indian citizens have activated social media and IT strategies to reach those in dire need of support.

On August 15, India's seventh largest airport, Cochin International, has suspended all operations until August 26 due to completely submerged [12] runways. The southern railway has suspended train services [13] on Thiruvananthapuram-Kottayam-Ernakulam and Ernakulam-Shoranur-Palakkad sections as water levels subsume railway lines. The Kochi metro service has also been suspended. 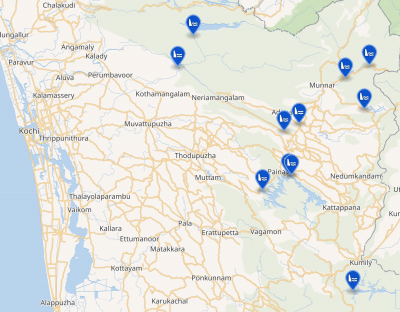 Map depicting some dams in Kerala state. Image via Wikimedia/Openstreetmap.

Monsoons in India have worsened over the last 15 years [15] according to one study done by the Massachusetts Institute of Technology (MIT). Recent data reveals patterns of “shorter bursts of rain in higher amounts.” [16]Rising land and sea temperatures [17] may also explain increased rainfall.

During this year's monsoon season, powerful rains arrived with more force, filling dams [18]to capacity. Nearly all 42 gates in the state of Kerala have opened, flooding local low-lying areas that have led to casualties.

On Tuesday, August 14, Kerala Chief Minister Pinarayi Vijayan declared, “This is the worst monsoon disaster since 1924.” [16]

Indian netizens have called for more coverage in local and international media, complaining that the state of Kerala lacks sufficient disaster management resources:

Please share: Kerala, India has suffered a major flood but the story isn’t receiving international coverage. Over 54,000 people are homeless and the situation is dire. Let’s try to build awareness of this tragedy. #KeralaFloodRelief [9] pic.twitter.com/2hMg6Wsk0J [19]

More than 95 people have lost their life in #KeralaFlood [8] Lakhs have been displaced. Modi and his TV channels do not care. You will know why if you too belong to a non-hindi-speaking state. These states don’t exist. They don’t matter. Discrimination. Sad reality of India. pic.twitter.com/sBaLdm0pCc [23]

Prime Minister Narendra Modi is scheduled to visit Kerala to assess the situation on August 17, 2018.

Kerala is fighting it almost all alone, the severest and worst flood ever for last 100 years. If national and international agencies continue to show indifference, it will be a pity. But it is left to them to decide. The spirit of unity, willpower, compassion, and dedication of thousands of volunteers belonging to state and non-state agencies in Kerala are indescribable. Wherever possible they have sought and used whatever assistance that was forthcoming from the Naval and army units. Hundreds of people I personally know, people who are my friends, and several thousand others, have dedicated themselves to the rescue and relief operations, online and offline. Some of them have not slept for days together. The physical and material loss is enormous, the state's infrastructure is reduced to rubble. Crops and livestock are almost destroyed. But the loss of human life is kept to the minimum because Kerala is now an ocean of mutual love, care, and mindfulness. We have ourselves and we shall overcome. 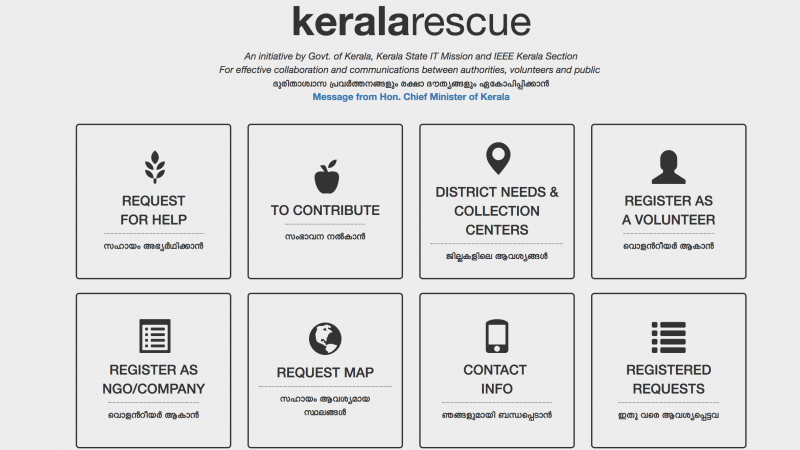 Kerala residents at home and abroad are working to connect rescue operations with those in dire circumstances. The Institute of Electrical and Electronics Engineers (IEEE) Kerala and the Kerala government’s IT department has partnered with thousands of volunteer developers to design and run keralarescue.in [31], a website working to connect all stakeholders.

To ensure transparency, their codebase is hosted on GitHub, an open source platform. Others are inputting Whatsapp emergency messages into Google Docs like this one [32] from Chennai Cares: 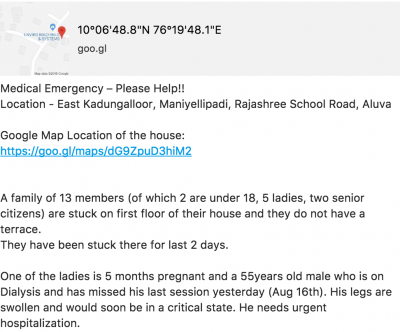 Example of a call for help using Google Docs geo-coordinates.

Netizens have turned to Whatsapp to relay calls for help. The Kerala State disaster fund released a list of WhatsApp and landline numbers [34] to contact for assistance.

Videos on Facebook describing [35] how to mark one’s location in Google have been shared widely. Yet residents face uncertainty now that all five of the Idukki Dam Gates have opened for the first time in history [36]. One man makes a desperate video plea [37] as he stands neck-deep in the water on the second floor of his Kerala home.

It's deluge in #Kerala [27]. Cheruthoni town near Idukki dam is seen in the video #keralafloods [38] @IndianExpress [39] pic.twitter.com/n2JmevqbKD [40]

The Times of India is providing Live Updates [13] to follow this developing story.