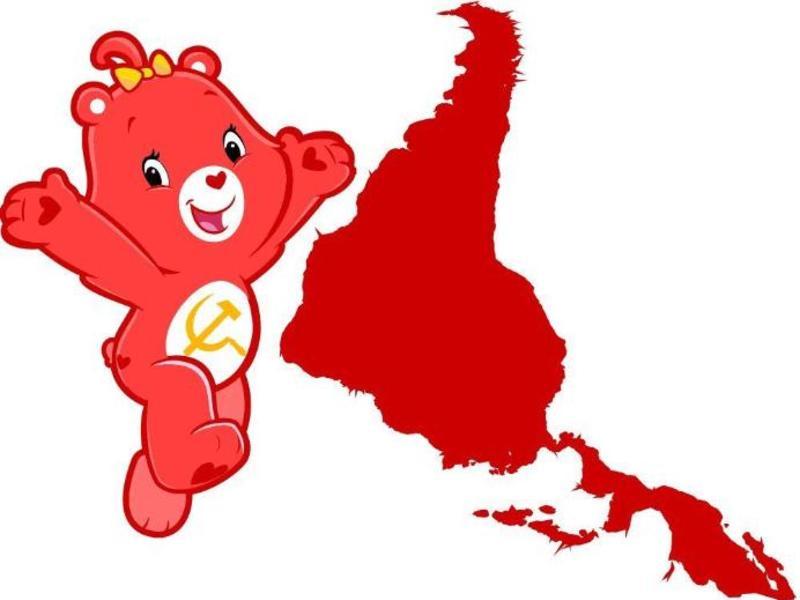 As Brazil's presidential elections draw near, two important issues are top and centre: first, the hope of placating the chaos of that has engulfed the country's politics for the past four years. Second, the country's favorite sport, second only to football: memes.

The first presidential debate broadcasted on live television, on August 9, provided a true field day for its enthusiasts when Cabo Daciolo, an evangelical firefighter running for the small far-right party Patriota (Patriot), asked another candidate to share his thoughts on “the Ursal project”. 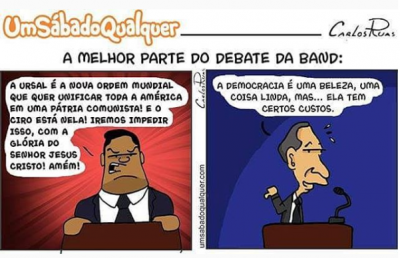 Daciolo (left): “Ursal is the New World Order that seeks to unify all America into a single communist homeland! And Ciro is part of it! We will stop it with the glory of our Lord Jesus Christ! Amen!”. Ciro Gomes (right): “Democracy is great, a beautiful thing … but it has certain costs” Cartoon by Carlos Ruas , used with permission.

As Daciolo explained, Ursal is the Portuguese acronym for Union of Socialist Republics of Latin America, a purpoted plan of communist triumph in the fashion of the defunct Soviet Union.

Upon his interlocutor's denial of any knowledge about the project, Daciolo continued:

Yes, you know, we are talking about a plan that is called New World Order, the union of all of South America, connection of all of South America, taking away all the borders, making one single nation, the great motherland. Few people have heard about this, this isn't going to be very much publicized. They know what we are talking about. I want to make it very clear that, in our government, communism will not have any space.

It turns out that the “project Ursal” is a rather obscure, crazy conspiracy theory that has run wild on Brazil's far-right forums and blogs for a good number of years. A website created in 2015 called Ursal Dossier compiles all the “evidence” proving the existence of such a plan.

However, now that it was out in the open, progressive sectors of the Brazil internet really liked the idea. In a matter of days, Ursal had a map, logo, slogans, passport, football team, and a national anthem.

Starting now, I will fight every day for the implementation of URSAL

As socialists in Latin America it was our duty to invest in the propaganda of our beloved Union of Socialist Republics of Latin America. Long live the Ursal (we'll make a t-shirt, comment here whoever want's it)

By integrating some of the best national football teams in the world, Ursal would have the greatest number of FIFA World Cup championships:

And a dream line up:

Think about this squad, man.

It is possible to buy a Ursal t-shirt:

HELLO YOU WHO BELIEVES IN URSAL! NOW YOU CAN WEAR IT WITH PRIDE!

Or request a passport:

Here you can find where to get your “little red”, the passport that allows you to travel through all socialist countries.

And Ursal's national anthem was fully crowdsourced on Twitter:

Lifecycle of a conspiracy

The term Ursal was created, as a joke, by conservative Brazilian professor Maria Lúcia Victor Barbosa, in 2001. In an article published by right-wing blogs at that time, she used the term to poke fun at that year's edition of the São Paulo Forum summit, a gathering of Latin American and Caribbean left-wing political parties and organizations.

At the 2001 summit, Worker's Party founder and former Brazil's president Luiz Inácio Lula da Silva made a vehement speech against the Free Trade Area of the Americas, a proposal made by the Bill Clinton administration in the United States to reduce trade barriers between all American countries.

In her article, professor Barbosa said:

From its moral high ground, [Lula] declared, to the joy of the leftists and rightists of Latin America: ‘It's a project of annexation by the United States. It will be the end of the Latin American integration”. But what would be, I ask, this integration in the model Castro-Chávez-Lula? Perhaps, the creation of the Union of the Socialist Republics of Latin America?

Within a couple of years, Ursal was spoken of in right-wing blogs and forums as a fact, the supposed ultimate goal of the São Paulo Forum.

In an interview with Brazil newspaper Folha de S.Paulo on August 13, 2018, professor Barbosa confirmed that she had come up with the term as an irony.