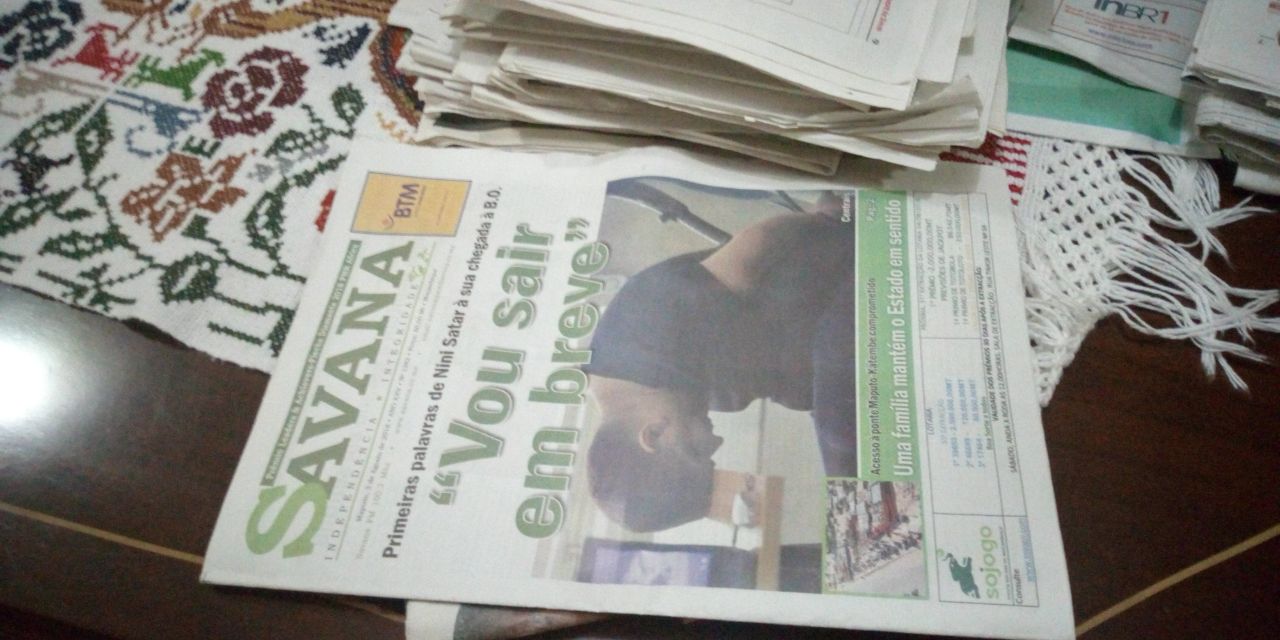 During his first day back behind bars, Nini said that he would get out soon | First page of SAVANA, 3 August 2018 | Photo taken by the author

This case centers on Momade Assife Abdul Satar, better known as Nini, one of those sentenced for the killing in November 2000 of Carlos Cardoso, a Mozambican journalist who exposed a government corruption scandal and founder of the country's first journalist cooperative.

Nini's conditional release was revoked and an international arrest warrant was issued by Maputo City’s Judicial Court which was used to detain him in Thailand, on 25 July 2018.

But according to a communique released by the Attorney General's Office in 2017, Nini led a criminal organization and kidnapped Mozambicans with the intention of demanding huge amounts of money.

During his time outside the cells, Nini constantly posted on Facebook messages criticizing Mozambique’s justice system, as well as some political figures.

TV analyst Tomás Vieira Mário said that he did not understand the reasons which led to Nini’s release, and he even considered such a decision to be a failure of Mozambique’s justice system:

What is behaving well? What does that mean exactly? What are the choices taken which are used for somebody with crimes of this nature to be able to get out on conditional release and later be authorized to go abroad on more or less indefinite terms.

After his arrest in Thailand, he was found to be in possession of a false passport under the name Sahime Mohammad Aslam.

South African press reported that Nini is also involved in kidnapping cases, but this has yet to be confirmed by Mozambican authorities who are still waiting for an official statement from the South African government.

Although authorities have not discussed details, it is known that kidnapping is prominent in the charges which should once again bring Nini to the dock.

It should be noted that, in relation to these cases, a public prosecutor and defendants accused of direct or indirect involvement have already been murdered.

In a video uploaded to Youtube, one could see the moment when Nini left Bangkok airport to be extradited to Maputo:

On social media, Nini’s capture and extradition sparked debate, in particular many questioned the reasons behind his release in 2014 and his fugitive status, since Nini repeatedly made public appearances. Jenny Baptista, Facebook user, remarked:

What stupid news! Nini Satar was really a fugitive that posted everything almost daily on Facebook and sometimes with the location? They don’t know what to make up anymore?

Caliste Meque Meque, member of Renamo (main opposition party), even questioned if Nini could be considered a fugitive, as it was the Mozambican courts that approved his release:

Some, such as Eduardo Domingos, student at Eduardo Mondlane University (UEM), used Nini’s capture to remind Mozambique’s political leaders to arrest other bigger and dangerous criminals working in the government.

Meanwhile, one Twitter user cited Nini's arrest in Thailand as a failure of the police in Mozambique and South Africa to capture the wanted man:

#Pakistani kidnapping kingpin Nini Satar operating in #Mozambique and #SouthAfrica arrested and being interrogated in Thailand. Mozambique and South African police failed to arrest him. This is what you call a professional police unit. pic.twitter.com/pOkMkul0o6