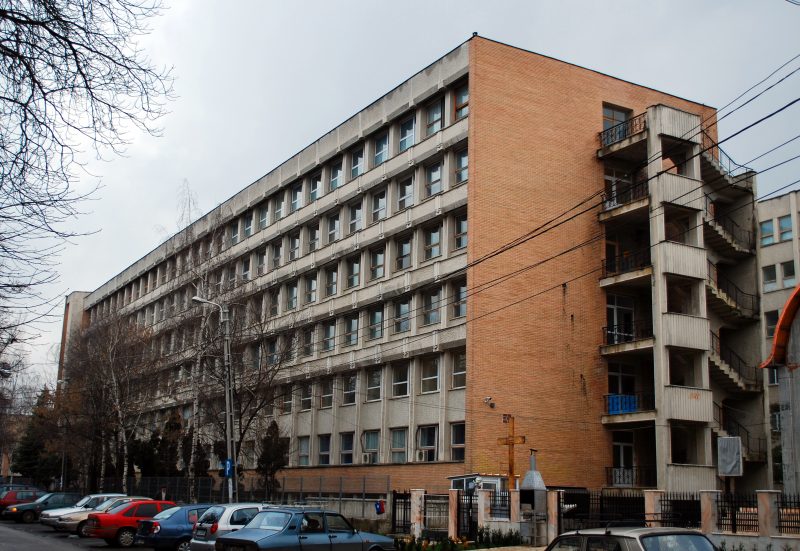 А typical Romanian general hospital building. This one is in the city of Roman, in the East of the country. Photo by Andrei Stroe, via Wikipedia, CC BY 3.0.

Since joining the European Union (EU) in 2007, Romania has been grappling with a huge emigration flow of medics, with child health care bearing the brunt of the widening gap of human capital.

Several hospitals in towns outside the capital Bucharest operate with only one pediatrician on duty. When they take a vacation, the unit has to shut down because replacements are ever harder to come by.

According to the Romanian Institute of Statistics data in 2017 and 2016, the number of doctors in the country only slightly increased since 2015. Most are not willing to take the pay cut or work with less-than-adequate equipment of countryside clinics. Instead, they prefer to work in larger cities or consider multiple offers for work abroad.

Romania's medical expenses per capita are already the lowest in the EU, while its infant mortality rate is the highest. The country is followed on both counts by Bulgaria, which also joined the EU in 2007 and faces similar trends with human capital flight.

Ioana Moldovan, a documentary photojournalist who reported on the pediatrician shortage, wrote on her website last year:

Romania has a population of almost 20 million. Doctors in rural areas are outnumbered by peers in cities two to one, while half of the population lives in the countryside. The health care sector is overrun with crises and never ending problems. In 27 years since the anticommunist revolution of 1989 the country has had at least 25 health ministers take office. None has so far managed to get Western care standards for patients.

In a statement for Global Voices, Dr. Constantin Giosanu, a pediatrician and coordinator with the IMED Foundation, acknowledges that most public hospitals in Romania receive financial resources from government funds, but:

…not as much as needed for proper work, the amounts come late and sometimes are inadequately used by the managers of those hospitals.

To make matters worse, Romania is also suffering the lowest proportion of nurses and midwives per head in Europe. They often work in hospitals without basic supplies, and specific treatment cannot be implemented unless patients provide the supplies.

Such stressful conditions and low salaries have led to bribery as a common occurrence in state hospitals. Patients have been known to give money or other “presents” to doctors and nurses to secure the care they need to survive.

In 2016, 77 oncologists in the country were charged with bribery for prescribing specific cancer drugs to patients in exchange for a holiday to India, according to an analysis by OpenDemocracy.

The city of Tulcea, with a population of over 70,000 people, only has 361 doctors, ranking near the bottom in Romania numbers of doctors per capita.

In August 2016, dozens of parents organized a protest over the desperate conditions of the pediatrics unit of their county hospital. Serving around 200,000 people, from Tulcea and its nearby villages, the hospital has only one pediatrician and the unit has to close whenever he is on vacation.

In 2017, the unit remained shut for nearly a year due to the total absence of qualified doctors. At the beginning of 2018, a pediatrician was finally employed and activity resumed, but with only one specialist on staff, families still have to wait for hours with their children for service.

Also in 2017, the hospital announced a shortage of doctors in all specialties. There were 33 positions open at the time, but no one had expressed interest.

The situation is exactly the same like in the rest of the country… We organize a contest, and try to behave well with the people who come, not to cause any extra stress for them. We offer to pay their rent, but they do not care anymore. I receive monthly offers to work abroad myself.

The situation is similar in other counties like Calarasi, Giurgiu, and Ialomita. Meanwhile, over 12,500 or 22 percent of all doctors in the country work in the capital city of Bucharest.

A similar history happened with the Drăgăşani Municipal Hospital in the western county of Valcea when it had to close their pediatrics section in July 2017 after the only pediatrician in the hospital took a paid leave for two weeks. With only two working ambulances in Drăgăşani, the community faced a high risk of becoming stranded in the case of an emergency.

How will Romania find its way out of this crisis? Dr. Giosanu has an idea:

I think it is up to the doctors and the press to educate [for long term] the population and patients to stop accepting corruption, poor health management, poor health services. In this way, the system will develop the same as the one in Western Europe.