In Pakistan's elections, animals were tortured for the sake of political stunts 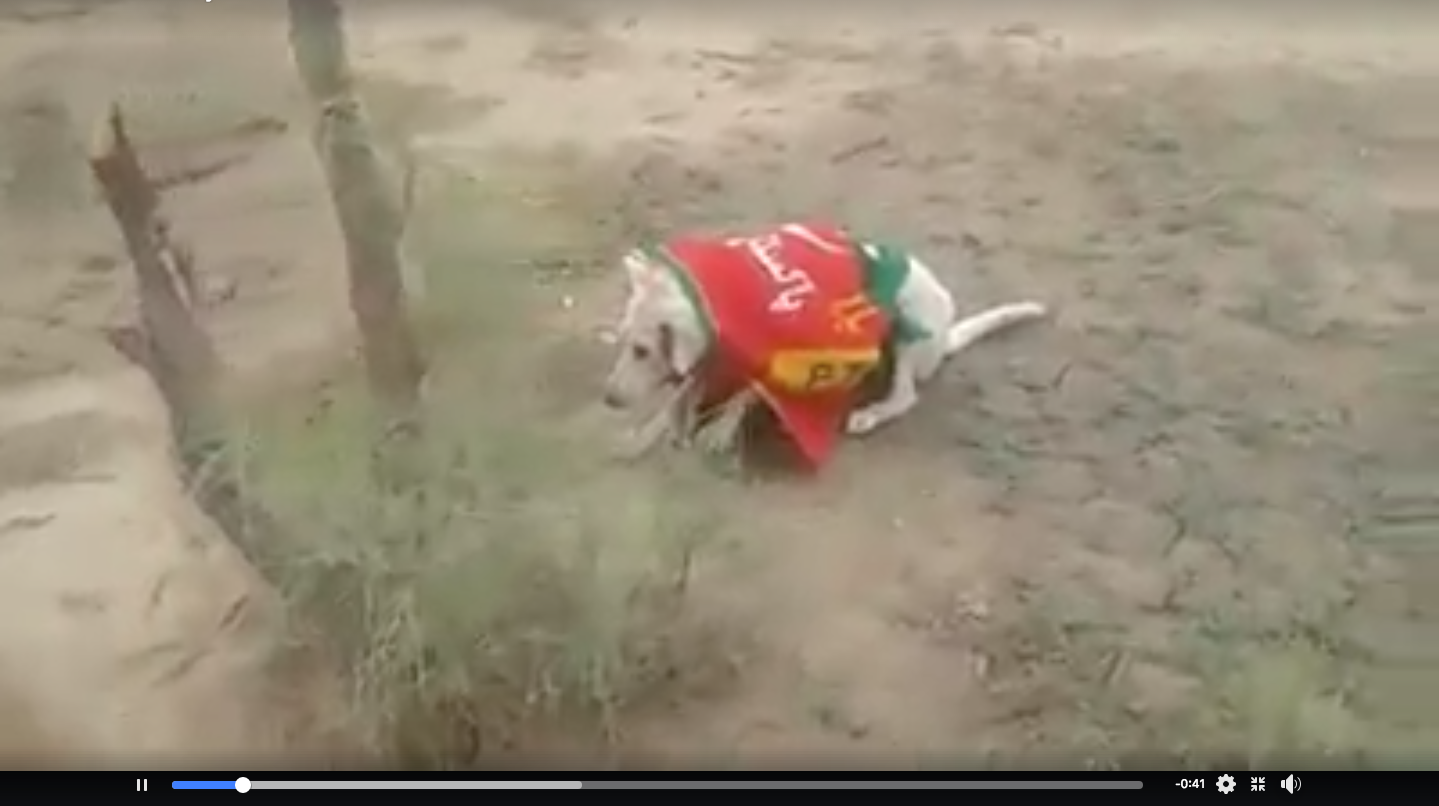 A dog was wrapped up in the banner of a political party and shot. Screenshot of a video uploaded on Facebook by the page Innocent Pets Shelter Welfare Society.

Activists in Pakistan tortured animals during and after the 25 July 2018 general elections in efforts to make political stunts, images shared the online show.

People were seen painting, beating and even killing animals that have been dressed to represent political opponents in a campaign that had already been marred by violence. Separate bomb attacks targeting political rallies claimed the lives of more than 150 people leading up the vote on July 25.

Former cricketer-turned-politician Imran Khan is due to become Pakistan's next prime minister after his party Pakistan Tehreek-i-Insaf (“Pakistan Movement for Justice”, known as PTI) secured a majority of seats on the polls, defeating the former rulers of the Pakistan Muslim League-Nawaz (PML-N).

In a video [Warning: graphic content] that went viral on July 27, a dog wrapped with PTI flag is seen being shot three times by a man carrying the flag of the Qaumi Watan Party (QWP), while surrounded by what seems to be other supporters of the losing candidate.

Following the reactions on social media, the police of the Khyber Pakhtunkhwa province arrested two suspects in the city of Bannu, where the video was recorded, and later released a confession by the two men.

Responding within 12 hours, #Bannu Police worked throughout the night to arrest 2 culprits at 6:45am involved in torturing, killing the animal and making video of it. #KPPolice thanks Social Media users for raising the issue. pic.twitter.com/0SDSYEgAu9

The Prevention of Cruelty of Animals Act enacted in 1890 was amended earlier this year to include higher fines and up to three months prison time. This was the first time the updated punishments were applied.

The losing contender, whose photo is displayed on the party flag carried by the shooters, has since released a video (in Pashto, a language spoken by 15 percent of Pakistan's population) condemning the act and stating he has no connection with the men in the video.

He has also entertained the possibility of the video having being staged by his opponents to discredit him and demanded an investigation.

QWP candidate from Bannu in his video message said that the forceful change in the elections result and rigging hasn't made him as upset as that video by unknown cruel person shooting a dog with PTI flag pretending yo me his supporter. https://t.co/lSYiowwniF

On another photo that also made the rounds on Twitter, a man is seen holding a crow by its feet as a crowd celebrates the local victory of the PPP:

The anti PPP politician Arbab Rahim, is called “black crow” by PPP supporters due to his dark complexion.
In these photo PPP supporters are celebrating PPP's win by killing/torturing the crow. @imtiazchandyo pic.twitter.com/FFhA8QKB7T

In Karachi, people wrote a rival candidate's name on a donkey and beat up the animal. Following heated social media reactions, the Foundation for Animal Rescue team took the donkey to their shelter, where he was named ‘Hero’.

With the upcoming elections looming upon us, no one is spared from the wrath of this time…not even the most helpless of animals. This is a hate crime. A #donkey beaten to pulp, punched in the face and abdomen several times, nose broken, kicked all ove.. https://t.co/OIKM2oRSuu pic.twitter.com/it2Fgct9DT

Our Hero just passed away.
He was doing a lot better until yesterday, he managed to stand up on his own, eat powdered food although he had a broken jaw, and drink water on his own. He had been on IV drips, multivitamins and antibiotics. His external wo.. https://t.co/phhh7DKwiR pic.twitter.com/6MEI0Xitvy

I would be incredibly proud of this country if the Chief Justice of Pakistan for once did the right thing and took Suo motu notice of the cruel inhumane killings of animals during and after this election campaign.

In the country's previous election, in 2013, a white tiger that was frequently paraded at the rallies of Mariam Nawaz — the daughter of Nawaz Sharif, the PML-N leader — died by heat exhaustion.

In this year's poll, a candidate of the PML-N has also paraded a lion in his constituency, also drawing criticism.

In an interview with Global Voices, Naeem Abbas, Advocacy Manager for the Brookes Pakistan, pondered on the reasons why abusers are not punished:

Animals have always been abused but this is the first time police have taken action in an animal abuse case. Also, we have a culture in which if someone is caught they get away by paying a bribe.