His world was what it was: the enigma of V.S. Naipaul 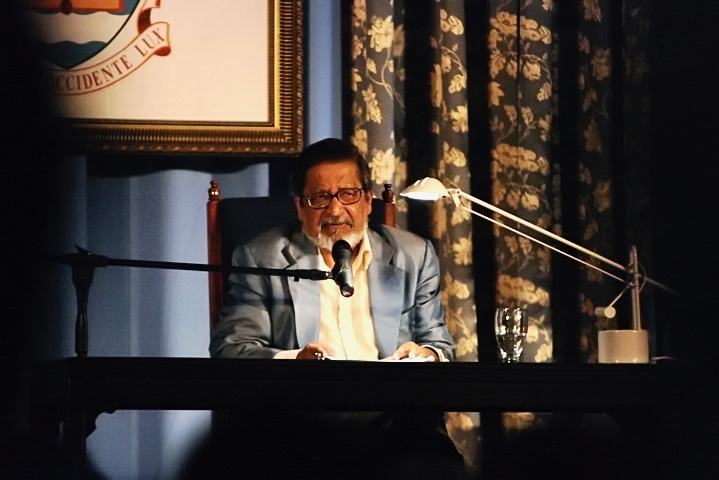 V. S. Naipaul reads at the University of the West Indies in Trinidad in April 2007. (PHOTO: Georgia Popplewell (CC BY-NC-ND 2.0)

He was the rare literary figure of sufficient notoriety that newspapers had kept draft obituaries on file for decades. When news broke on August 11 that V.S. Naipaul had died at the age of 85, press coverage was swift and voluminous. It was a front-page story in Trinidad and Tobago’s three daily newspapers, the Nobel laureate’s photograph blown up above the headlines.

On the social networks where most of T&T’s public debate now unfolds, some commenters pounced on the detail that the international press described Naipaul as a British writer. “He would have loved that,” was a typical response. For those who disapprove of Naipaul—and he courted disapproval—one longstanding grouse was his supposed disavowal of Trinidad, the island where he was born and grew up. We remember the sting of Naipaul’s statement on receiving the 2001 Nobel Prize: “It is a great tribute to both England, my home, and to India, the home of my ancestors, and to the dedication and support of my agent.” Full stop. So, to be elegised as British: surely that was his wish all along?

V. S. Naipaul's death makes the front pages of all three daily newspapers in Trinidad and Tobago. “For those who disapprove of Naipaul—and he courted disapproval—one longstanding grouse was his supposed disavowal of Trinidad, the island where he was born and grew up.”

But the facts are complicated. Born in a British colony, Naipaul was a British subject when he left Trinidad in 1950, 18 years old, on a hard-won scholarship to Oxford. He was permanently settled in London by the time Trinidad and Tobago became an independent nation in 1962. He was “British” all along, and at the same time he never really belonged in his adopted country. The evidence is plain to read in his books.

Naipaul was “Trinidadian to the core,” says Kenneth Ramchand, the eminent literary scholar. “Trinidad made him. It shaped him, and even when he was vexed with Trinidad, it haunted him throughout his career.” I’d go further and say Naipaul was the most Trinidadian writer Trinidad has produced, in all good and bad ways. “A House for Mr. Biswas” remains the closest thing we have to a Great Trinidadian Novel, with its unsentimental portrait of an Indo-Trinidadian family striving for a sense of coherence and self-determination in a small society “at once exceedingly simple and exceedingly confused.” “The Suffrage of Elvira” is the most valuable primer for anyone trying to understand T&T’s incorrigibly tribal politics (according to no lesser authority than the political theorist Lloyd Best). “The Loss of El Dorado” is still the most bracing and penetrating history of colonial Trinidad. And the picaresque stories of “Miguel Street”, Naipaul’s breakthrough book, have more pervasively influenced subsequent Trinidadian fiction writers than any other text.

Naipaul always portrayed his writing as a quest for self-understanding: “I had to do the books I did because there were no books about those subjects to give me what I wanted.” And “those subjects” are the historical circumstances into which he was born, in the Trinidad of 1932. In the essay “Prologue to an Autobiography”, he offered a summary:

“… there was a migration from India to be considered, a migration within the British empire. There was my Hindu family, with its fading memories of India; there was India itself. And there was Trinidad, with its past of slavery, its mixed population, its racial antagonisms and its changing political life; once part of Venezuela and the Spanish empire, now English-speaking, with the American base and an open-air cinema…. And there was my own presence in England, writing….

“So step by step, book by book … I eased myself into knowledge.”

“I am the sum of my books,” he said. And the self he created in his books was deliberately free of loyalties to anything but writing itself. He strove to achieve “a freedom from people, from entanglements, from rivalries, from competition.” He added: “one doesn’t have a side, doesn’t have a country, doesn’t have a community; one is entirely an individual.” This stance put Naipaul in conflict with many other Caribbean writers, and indeed with many Caribbean readers.

For decades, Caribbean literature has been animated by unresolved arguments about responsibility, language, authenticity — about how to be a Caribbean writer. Naipaul remained aloof from these debates. The relatively good-humoured satire of his early fiction set in Trinidad matured in the 1960s into a sharper, more pessimistic criticism of what Naipaul saw as the pretensions of post-Independence Caribbean societies—“half-made,” inhabited by “mimic men.” As he travelled more widely, he extended his scrutiny to other postcolonial nations in Asia, Africa, and South America. Nowhere did he pull his punches. He was accused of exaggerating the squalor of India, of hostility to Islam. His descriptions of black Caribbean people and Africans often seem to betray racial anxiety, if not outright prejudice.

And in a spirit of serious mischief, he baited his critics with outrageous remarks. In a profile published soon after Naipaul won the Nobel Prize, my colleague Jeremy Taylor listed some memorable slurs:

“Over the years, he has called people monkeys, infies (inferiors), bow-and-arrow men, potato eaters, Mr Woggy. He has described whole countries as ‘bush.’ Oxford University, where he earned his degree in English, was ‘a very second-rate provincial university.’ Africa ‘has no future,’ and as for African literature, ‘you can’t beat a novel out on drums.’ He once recommended that Britain should sell knighthoods through the Post Office (this was before he became Sir Vidia Naipaul).”

Trinidadians ought to recognise these provocations as his version of our very own picong, the mocking, merciless banter perfected by our calypsonians. We should understand his impish public conduct as Naipaul “playing himself,” as Trinidadians describe the performance of a carefully crafted persona that at once masks and reveals. His biographer Patrick French quotes the Barbadian writer George Lamming’s suggestion that Naipaul was “playing ole mas” — “masquerading or making trouble for his own entertainment, a Trinidadian trait.” French adds: “when he was being rude or provocative in this way, Naipaul was full of glee.” This is the irony that exposed the man behind the writer: he was never more Trinidadian than when he was bad-talking Trinidad. 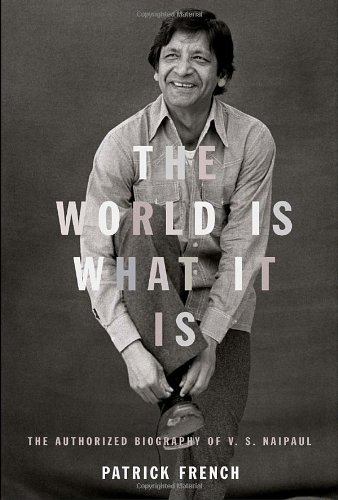 “No one can come away from [Patrick] French’s biography ‘The World Is What It Is’ without feeling repulsed by Naipaul’s bigotries, his misogyny, his cruelties aimed at loved ones and strangers alike. But then there are his books, written in prose of beautiful rigour and clarity, their relentless probings sometimes finding an unexpected tenderness.”

And so the most thoughtful responses to his death have also been the most conflicted. No one can come away from French’s biography “The World Is What It Is” without feeling repulsed by Naipaul’s bigotries, his misogyny, his cruelties aimed at loved ones and strangers alike. But then there are his books, written in prose of beautiful rigour and clarity, their relentless probings sometimes finding an unexpected tenderness.

His lifelong subject was how the unfeeling forces of history — especially the huge movements of peoples between and within cultures, driven by the colonial enterprise — play out in the lives of ordinary people. He was fascinated by the making and remaking of the individual demanded by these dislocations. His family, the island of his birth, the far-flung places he travelled to, and his own misunderstandings and illusions were equally apt for scrutiny. And his books, at their best, give us portraits of our societies and ourselves which we can’t deny, even when we’d prefer to. There are books of Naipaul’s I hope never to read again, and books of his without which I can’t understand the world I was born into.

“Everything of value about me is in my books.” That may be the truest sentence Naipaul wrote. It’s not a question of whether the work justifies the sins of the man. That is too simple an equation. The power and, yes, the beauty of his writing is in some way the product of the writer’s flaws, and also in some way transcends those flaws, without absolving them. The moral algebra of art is difficult, and it should trouble us. There is no better example than the books of V.S. Naipaul. It is one of the reasons—the great reason—I feel compelled to read him.

Nicholas Laughlin edited a revised and expanded edition of V.S. Naipaul's early family correspondence, Letters Between a Father and Son (2009).