What happens when women report sexual assault in Japan? 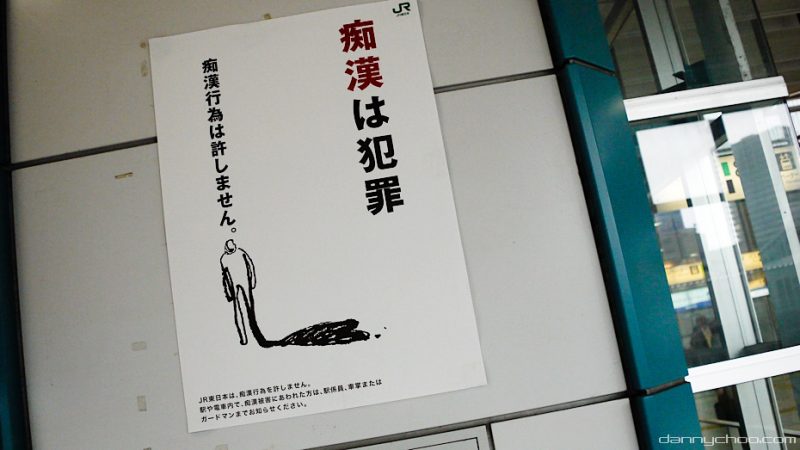 “Chikan (groping / sexual assault) is a crime. There is no tolerance for chikan.” — poster in a train station in Tokyo, Japan. Image source: Tokyo Times Flickr account. License: CC BY-NC-ND 2.0.

One Canadian woman's recent experience of sexual assault on a Tokyo train, including the way the police responded, has prompted discussions on Twitter about Japan's ongoing problem with ‘chikan‘ (痴漢 or train-gropers in Japanese). The documented sexual assault experience resembles recent high profile cases in Japan involving journalist Shiori Ito, a blogger known as Hachu and stage actress Shimizu Meili.

In July 2018, a woman who goes by the name ‘Jenna‘ on Twitter began sharing a series of tweets that described being stalked and groped by a man on a train in Tokyo, and then what happened when the groper was arrested and she filed a report with the police.

In a series of tweets, Jenna reports:

About 20-15 or so minutes from Omotesandō a large man approached me from my left side. He was staring at me in a very lecherous way. He came right up against me and whispered “kirei” which means “beautiful” in Japanese. I ignored him and looked around at the people in the seats, some noticed his strange behaviour…

Generally, incidents of groping by ‘chikan’ are prosecuted by police under Section 176 of the penal code as “forcible indecency” (強制わいせつ). According to the Tokyo Metropolitan Police Department, 1,750 cases of groping or molestation were reported in 2017. More than 50 percent of groping cases occurred on trains, the report says, with a further 20 percent occurring in train stations. However, survivors of sexual assault in Japan often lament that such cases are difficult to prosecute.

Jenna continues to describe her personal experience with train-groping throughout her Twitter thread:

…The Japanese man sat down when a seat opened up, and continued staring at me, mainly my face and my thighs (I was wearing a skirt). I felt quite uncomfortable, but honestly I've experienced similar things before, and was okay…

…He stood up again after a couple of minutes and came up to me again and asked me where I was going (in Japanese.) I said “huh?? What??” And he just stared at me…

In the same Twitter thread, Jenna said she considered getting off the train early to wait for the next train, but was afraid the man would follow. “I didn't really see any options and felt uncomfortable,” she explained in one tweet.

As her stop approached, Jenna got up and moved toward the carriage exit doors:

…I noticed the Japanese man looking up and noticing me at the door, he suddenly shot upright and practically ran up behind me, standing behind me and slightly to my left. I was quite scared at this point, and panicking about what to do, he was clearly going to follow me off the train.

This all happened within a few seconds, and within 10 seconds of him placing himself behind me, I felt his right hand touch my left butt cheek and squeeze hard, twice.

Jenna describes an adrenaline surge that prompted her to turn and strike her assailant, who then attempted to flee. She chased him onto the train platform, grabbing at his clothing while shouting in Japanese that she had been sexually assaulted. Station staff intervened and police arrived shortly thereafter.

Reporting a sexual assault to police in Japan

According to her Twitter thread, Jenna was driven to a nearby police station for what would become nearly seven hours of questioning, but her frustrating experience with the police began in the car:

The driver made some, in my opinion, condescending comments about how I couldn't possibly know he groped my butt because I don't have eyes in the back of my head.

At the police station, after her cell phone, passport and other ID were taken from her, Jenna reported that she started to feel scared:

I was scared being alone with a bunch of possibly power hungry men with no phone after what just happened to me.

Eventually, police wheeled in a partition to provide privacy, but Jenna explained:

…Almost 10 male staff members decided to go around it and hang out in the doorway to my room listening to my story anyway.

A male translator was put on speaker phone, and during the time I was explaining the story to him, those nosy men were talking and laughing so sometimes I couldn't even hear or explain properly to the translator.

After telling her story, Jenna says police recommended that she not press charges because her alleged assailant was apparently still a minor. Undeterred, Jenna said she still wanted to press charges.

The police measured and photographed Jenna's body in a process that took more than three hours. Pressing charges also meant having to perform a reenactment, a common requirement when reporting a sexual assault in Japan:

We go into the Hall and there's a mannequin with a brown wig, plaid skirt and white shirt. That's me. They have a staff member acting as the chikan. They have to set up/reenact and photograph every moment that happened on the train. And I have to be in the photos pointing at the situation to confirm I agree that's what happened I guess? Protocol they say.

Jenna noted that no potential witnesses had been contacted and that the police would make the final decision about pressing charges or not (in Japan, police refer criminal cases to a prosecutor). They returned Jenna's cell phone and other belongings. Nearly seven hours after being sexually assaulted on the train, she was free to go home.

They ask if I want to get a drive to Omotesandō station or home. I pick home obviously, they groan, it's an hour drive. But damn if I don't at least get a drive home out of this, I don't want to pay $15 just to get groped and waste 6.5 hours in the police station.

After the grueling experience at the police station, Jenna concluded:

If this happens again I will feel more powerless knowing there's probably nothing I can do, and nothing the police will do. #groping #chikan #japan #sexualharassment #police #痴漢

In the days that followed, Jenna's tweets were shared and discussed by many people around the world who mostly showed support. Some Japanese Twitter users also shared their own experiences with harassment and sexual assault in solidarity:

Hi, I've read your tweets. I'm so sorry that you had to go through this. I wish I could put a curse on him! Absolutely unacceptable ??I used to be harassed by ‘Chikan’ almost everyday as a kid. I'm angry that abuse against women/children is never taken seriously in Japan!

Others translated her tweets into Japanese:

As I tweeted about your experience, some Japanese guys criticized that it must be fake story. So I translated your all tweets into Japanese, regarding to groping. Here is the link of the translation. https://t.co/XxZZY646nD

Police ask the survivor to delete her tweets

By late July, Jenna's assailant had reportedly confessed to groping her, but the police did not take further action. Jenna tweeted that police had finally made the decision to put the assailant's case on record and hoped this would be enough to deter him from groping in the future.

When Jenna announced that the police suggested she take down her tweets, her story was shared more than 2,000 times:

Lmao the Japanese police suggested I delete the posts I made about my sexual assault. Real nice Japan, try to hide your shitty treatment of me

Ok now the police are saying they wanted me to delete it for "my safety" not because they wanted me to hide anything. I don't know if that's true or they're just trying to conver their butts, but I can protect myself, since clearly they won't