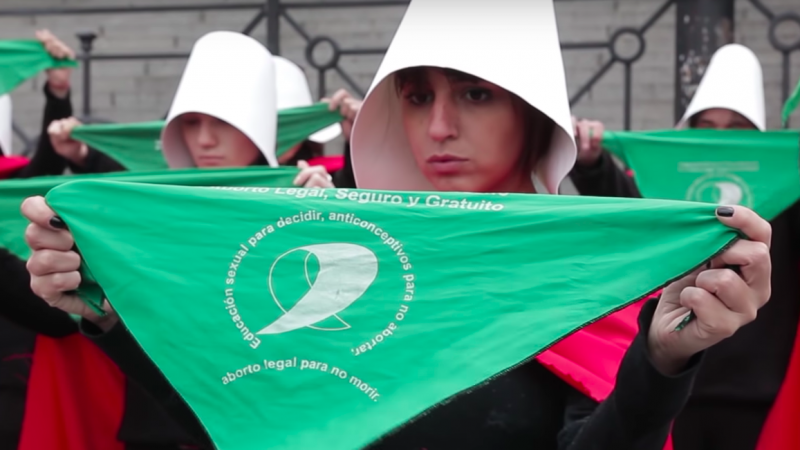 Argentinians hold a public demonstration in front of Argentinian Congress. Activists dress as handmaids from The Handmaid's tale, a dystopic television series centered on women's rights. Screenshot from the video shared on YouTube by LaVacaTV.

On Wednesday, August 8, members of the Argentinian Senate will debate and vote on a controversial bill to legalize abortion. The bill was presented by the National Campaign for the Right to Legal, Safe and Free Abortion and was approved to be discussed on June 13 following an intense debate while activists held a street-vigil outside Congress.

News of the historical milestone in the Chamber of Deputies made global headlines and gained the attention of organizations, news media, and netizens who are now watching closely as Argentina waits for the Senate's defining vote.

The organization National Campaign for Legal, Safe and Free Abortion called for an “International Green Handkerchief Rally” and feminist organizations responded favorably across the globe. Seen in numerous images of protests and rallies, the green handkerchief symbolizes Argentina's pro-choice movement.

New national vigils are planned to be held outside Congress and in the country's principal cities during the debate alongside demonstrations throughout the world.

The feminist fight and this green tide are international! From London, we shout together: Legal, Safe and Free Abortion in Argentina. Come and join us, solidarity is our weapon! ✊?#SeraLey #PanuelazoInternacional pic.twitter.com/YkSDA6Tdw5

Wednesday we will gather in Barcelona so that Legal, Safe and Free Abortion is legalized in Argentina.

A highly sensitive social issue, legalizing abortion touches on the political and ideological to the personal and religious. On social media and in the streets, demonstrations and debates for and against the bill are intensifying.

The National Campaign convoked “Green Tuesday” rallies held in front of Congress every Tuesday. Several manifestations against the bill were carried out, including a massive march convoked by religious groups and anti-abortion organizations on August 4 that occupied a large section of the Avenida 9 de Julio in the capital city Buenos Aires.

‘Blessed be the fruit'…of solidarity

When the Argentian Journalist Union staged a performance-demonstration by recreating images from The Handmaid's Tail, the dystopian novel by Canadian author and activist  Margaret Atwood, the action received international attention. Demonstrators wore red capes and white bonnets as they marched and lined up in front of Congress. The novel, which later informed the eponymous popular television series, tells the story of Gilead, a new world order in which women lose their reproductive rights under an imagined fundamentalist Christian regime.

During the performance, a demonstrator read some of Atwood's words explaining the context surrounding the novel and the ideas behind its creation. The phrase “blessed be the fruit” refers to the ritual greeting of Gilead residents, reducing women to the role as child-bearers.

Support for the movement has expanded on social media to include similar struggles in other counties. In Chile, they are currently reconsidering the partial decriminalization of abortion. A regional campaign called #VivasNosQueremos (We Want Ourselves Alive) has also emerged, drawing attention to the problem of femicide in Latin America and the Caribbean, where 14 of the 25 countries with the highest murder rate of women are located. 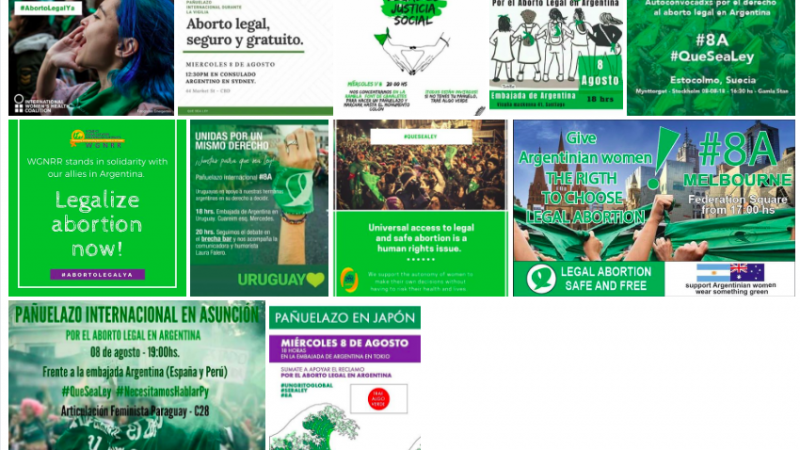 Screenshots of various online campaigns from around the world that support the Argentinian movement to legalize abortion, images collected by the author of this post.

Hours away from this historic debate, a very close vote is expected. A continuously updated count of senator's voting intentions reveals an inclination against legalization. The count suggests that very few senators are still undecided, even though possible abstentions and last minute surprises are not being ruled out.

For both sides, faith in the force of the fight in the streets has not been lost:

Demonstration for legal abortion in ARGENTINA and PUERTO RICO

The one who decides is the one who's here [me].

[In the image: We're with you]

This 8A from #Ecuador we will be focusing all our energy on #Argentina facing the decision of the @senadoargentina, it is an important advance in rights for #Nuestramérica

[In the image: Today, Argentina. Tomorrow, the whole of Latin America]

We will join the call of the @Coordinadora8m International Green Handkerchief Vigil to wait for vote for the bill #AbortoLegal by the Argentinian Senate.>
This August 8, abortion will be law in Argentina and tomorrow it will be legalized in all of Latin America! #NoBastan3Causales ??? pic.twitter.com/NZewrLMb49