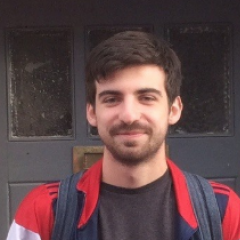 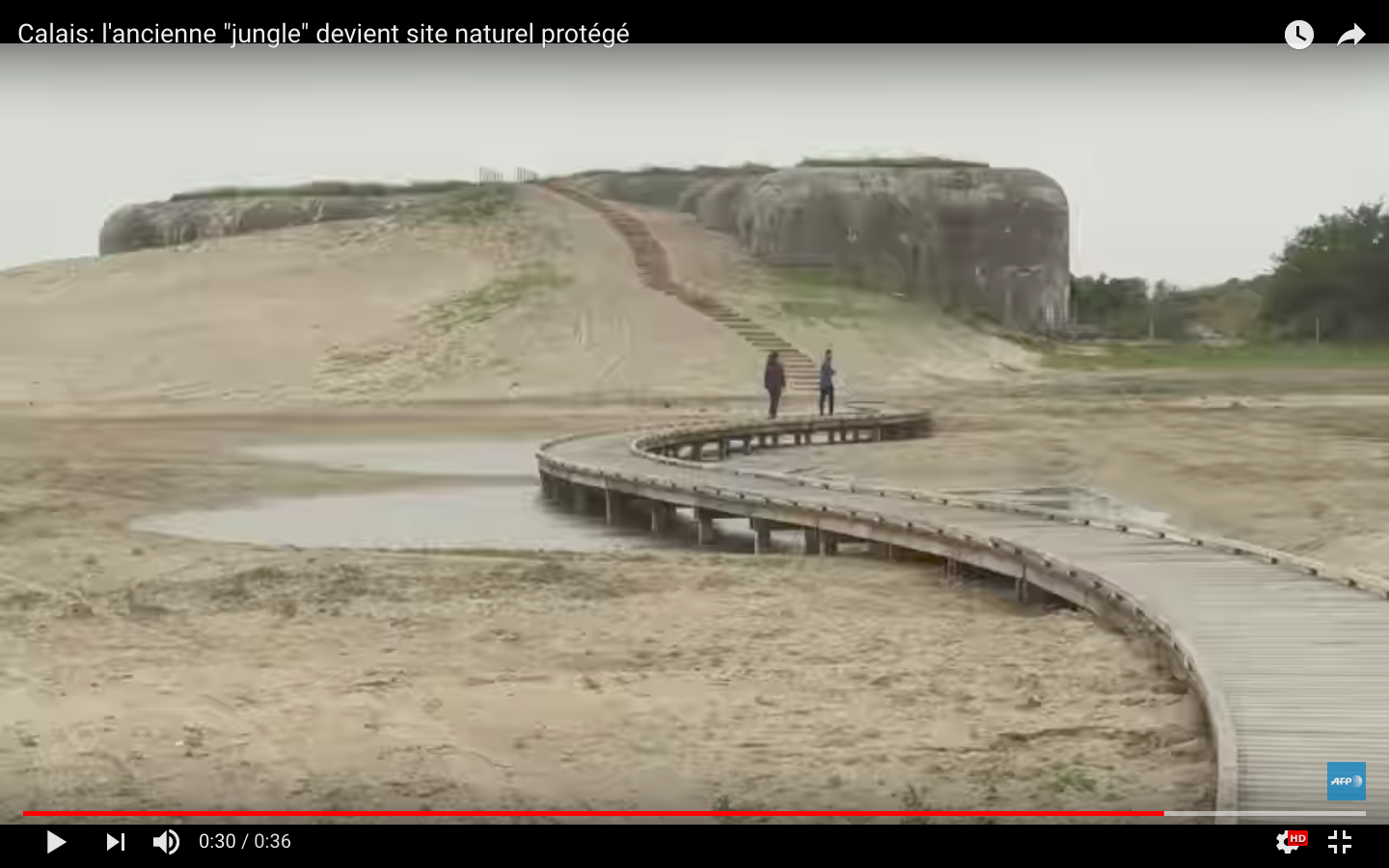 How the patch of land where the “Calais jungle” once was looks like today. Image: screenshot of Youtube video by AFP

A short wooden path winds through the lonesome expanse of sand, bushes and the abandoned bunkers built by the Germans in the 1940s. It leads to an observatory, from which one can gaze at the rather underwhelming landscape against the backdrop of a busy motorway and the factories that dot Calais industrial city.

This is the nature reserve inaugurated at the northern French town in June 2018 on the patch of land where the “Calais Jungle” once stood — and where up to 10,000 exiles from Afghanistan, Sudan, Syria, Eritrea, Iraq, and other countries used to live.

Amid controversy and intense media coverage, the site was dismantled and razed to the ground in October 2016, taking away not only the shelters of its inhabitants but also all of the other makeshift establishments — including restaurants, shops, a mosque and a church.

Local authorities developed in its place a wildlife park, advertised as an “ecological and landscaping reconquest”, which would promote the growth of “beautiful flora such as orchids, and the presence of birds, like snipes and sand martins”, the official website says.

However, some speculate that the project had been motivated by a desire to clear the city's spaces of undesired people, rather than protecting the area's wildlife.

Since the “jungle” was demolished, the French authorities have engaged in similar such projects in other parts of Calais. Another redevelopment enterprise seeks to transform a small wood, where a community of Eritreans live, into a park — the distinction being that woods are always open, whereas parks can be closed.

Tucked between a motorway, a high school, and a residential area, the 2.5-hectare woods is officially called the Chico Mendes Wood, while its Eritreans inhabitants have dubbed it Little Forest. Every day, local associations provide them with food, water, and personal care items.

Little Forest is also within close proximity to other local communities. Sharing such close quarters has sometimes led to tensions, particularly about waste disposal. According to Help Refugees, a charity, the authorities have failed to provide the forced migrants with adequate waste collection facilities.

On June 12, 2018, the Calais town hall convened a public meeting in which mayor Natacha Bouchart presented its plans for the woods. The meeting was attended by Global Voices.

There was a lot of discussion around the fact wood being the last reminder of the area’s history as a “beautiful marsh” (the literal translation of “Beau-Marais”, the name of the district where it is located), and one local resident reminded the audience that the woodland is home to a vast array of natural species, including salamanders that dwell close to the area’s central pond.

But no mention had been made of the wood’s human occupants until one resident timidly suggested, fifteen minutes into the meeting, that a solution should be found for “the people who live there”.

According to the city's plans, when the woods finally becomes a park, it will be surrounded by a fence to prevent entry outside of opening hours, and there are plans to attach cameras to the park’s street lamps. According to the mayor, this will help identify the owners of dogs that may defecate in the park.

The timeline of the project suggests that some elements are more important than others: while most of the construction is planned for the beginning of 2020, fences are scheduled to be installed in August 2018. How the Calais Jungle looked like on January 17, 2016. Photo: malachybrowne/Flickr CC BY 2.0

The proposed redevelopment of the Chico Mendes Wood is happening in the context of ongoing settlement clearings in Calais — some almost daily, and at least once a week. Under the new policy of “no fixation points“, authorities routinely destroy, tear-gas, or discard tents, tarpaulins, sleeping bags, and blankets.

These operations often take place at night or at dawn, without forewarning, and under heavy police presence. Not only are refugees’ homes taken away, but all too often their belongings are also confiscated, and various instances of police brutality against forced migrants, including minors, have been reported.

We can never know what Chico Mendes, who bestowed his name upon this small wood, would have thought of Bouchart’s proposal. The Brazilian activist, assassinated in 1988, dedicated his life to fighting for the preservation of the Amazonian rainforest as well as for the rights of peasants and indigenous peoples who lived in it.

In the words of Michel Agier, senior Researcher at the French Institute of Research for Development (IRD) and author of the book “The Jungle: Calais's Camps and Migrants“, the redevelopment projects are, effectively, an attempt at erasing the tumultuous history of this “draft of a city“:

There is a set of political crises that cause people to be forced to move around. What outrages the people of Calais is the mistreatment of the people who are there, and the bad image of their city because of that. It is not literally the camp or the migrants themselves, it is rather the lack of solution for their plight.