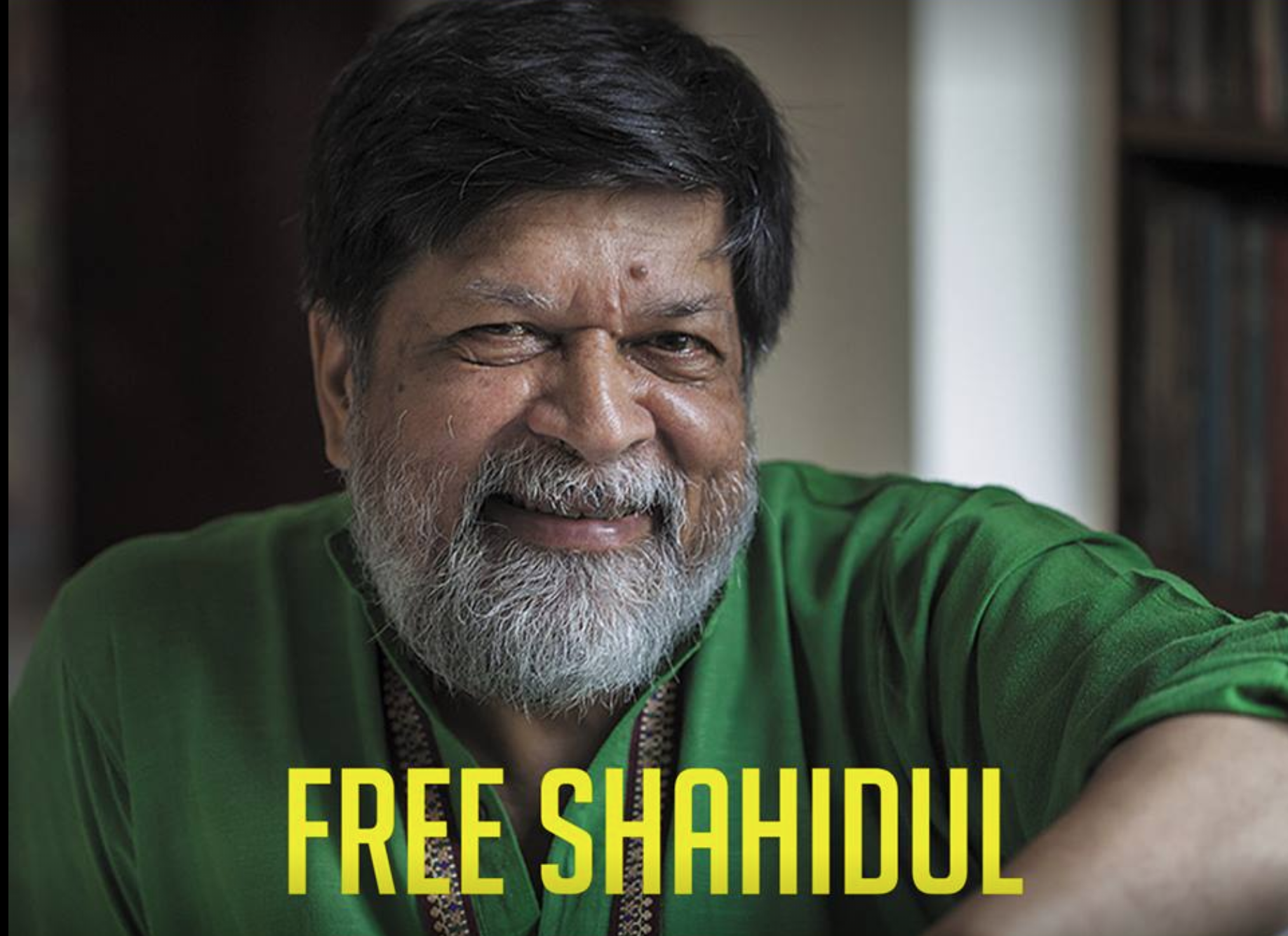 Late on the night of August 5, 2018, Bangladeshi photographer and activist Dr. Shahidul Alam was forcibly abducted from his house in Dhanmondi, Dhaka by men in plainclothes.

Alam is the founder of both the Drik Picture Library and the Pathshala South Asian Media Institute and a vocal journalist on issues related to rule of law and the public interest.

It was soon confirmed that a team of the Detective Branch (DB) of police had detained Shahidul from his residence, with the intention of interrogating him over his Facebook posts about ongoing student protests in the capital, Dhaka.

Secondary school students of different educational institutions in the Bangladesh capital have taken to the streets since July 29 demanding improved road safety and rule enforcement, after two of their classmates were killed due to reckless driving by public bus. The students are also demanding justice for the victims.

Detained for covering the student protests

More than one hundred students were injured over the weekend as the police resorted to excessive force, including firing rubber bullets and tear gas at thousands of peaceful student protestors.

remains of my video camera https://t.co/MJjt0PW4o5 I was filming Chhatra League members wielding metal rods and sticks chanting “Joy Bangla” slogans and chasing students. They saw me filming and turned on my attacking me and smashing my camera. #democracy #education #politics pic.twitter.com/AJZcdhH9gB

The protests took a violent turn on August 4 when rumors of student protestors being kidnapped, raped and killed began to spread online, but independent media sources at the Dhaka Tribune along with students themselves and a fact-hecking Facebook group called Jaachai (fact-check) have denounced these messages as false and debunked doctored photographs. Nevertheless, many students came out to the streets to protest the deaths. Several violent confrontations between protestors and police have ensued since. Mobs allegedly associated with Bangladesh's ruling party have also attacked demonstrators and journalists who were covering the attacks.

Emergency medical teams say they have treated more than 100 protestors who have been injured.

In an attempt to curb rapidly-spreading rumors, mobile internet speed was brought down to a minimum level (2G) shutting down 3G and 3G broadcasts.

Alongside his social media coverage of the protests, Alam apparently angered the authorities and the ruling party after he gave a TV interview on Sunday evening with Qatar-based broadcaster Al Jazeera where he talked about the recent situation in Bangladesh and criticized the government.

I think what we need to do is to look at what has been happening in the streets today. The police specifically asked for help from these armed goons to combat unarmed students demanding safe roads. I mean how ridiculous is that. Today, I was in the streets, there were people with machetes in their hands chasing unarmed students. And the police are standing by watching it happen. In some cases, they were actually helping them…

According to the latest reports, the police have received a seven-day remand to question Shahidul Alam in connection with an ICT Act case filed on August 6, 2018. He was taken to the court barefoot and barely able to walk. He appears to have been beaten while in custody.

Shahidul Alam says he was not allowed to have a lawyer, despite his demands. And that he was beaten by his captors who wanted to coerce him into giving a statement. Video via Arfun A. #freeshahidul pic.twitter.com/Y57PatOVAY

“I was hit (in custody). (They) washed my blood-stained punjabi and then made me wear it again,” said Shahidul Alam as he was taken to a Dhaka court for remand hearing, reports Shafiqul Alam (AFP bureau chief in Dhaka)

The police have not yet mentioned why he was detained but referred to the case which accuses him under section 57 of the ICT Act of “abusing” an electronic platform in order to spread “lies” among the population and with the intent to “invalidate and question” the government on the international stage, damage law and order, spread “fear and terror”.

The provisions of Section 57 of Bangladesh's notoriously broad 2013 Information and Communication Technology Act of Bangladesh have been used to slap hundreds of lawsuits against journalists and online activists to curb the freedom of speech online over the past few years.

Shahidul Alam did not make up stories to spread rumors. Like a true activist, he presented the facts on Facebook live with his photographs and data. He did not provoke anyone or direct anyone, he just analyzed the situation explaining what he saw on the streets. He spoke in English mostly in his Facebook Live broadcasts and the target audience of which are not the people involved in the protest, but the wider (international) community.

But he was sued under the ICT act for acting as a provocateur. This is very embarrassing.

Amnesty International has released a statement which read:

Shahidul Alam must be immediately and unconditionally released. There is no justification whatsoever for detaining anyone for solely peacefully expressing their views. His arrest marks a dangerous escalation of a crackdown by the government that has seen the police and vigilantes unleash violence against student protestors.