In the Caribbean's carnival capital, a Pride parade makes its debut 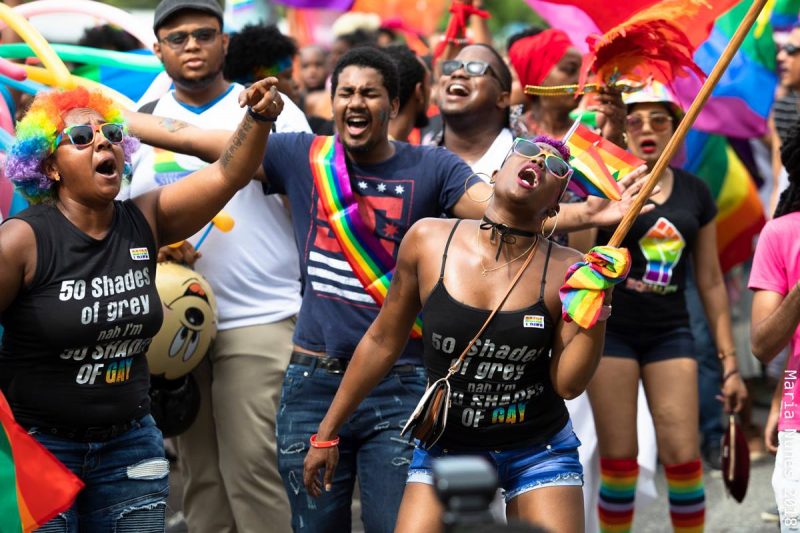 “The feeling of joyfully roaming the streets of the city where I was born and grew up, the same streets where it is acceptable, year in and year out, for thousands of revelers to parade during the bacchanal of Carnival.” PHOTO: Maria Nunes. Used with permission.

I am still smiling because of Saturday 28 July. History was made in Trinidad and Tobago with our first Pride parade. Since that day, I’ve been processing the experience. The feeling of joyfully roaming the streets of the city where I was born and grew up, the same streets where it is acceptable, year in and year out, for thousands of revelers to parade during the bacchanal of Carnival. What was different last Saturday? The difference was that all of us actually had a reason to parade: we all had an important statement to make. So many of my LGBTQ friends—some of whom flew back to Trinidad after emigrating to seek a better quality of life abroad, a life where they are covered by basic provisions which shield them from discrimination in the workplace, in accessing government services, and where they are fully recognized as human beings on an equal footing with anyone else.

Many friends privately told me they never thought they’d see the day Trinidad would have a Pride parade. I could feel their emotion as they recalled years of experience in this country where LGBTQ people are subject to discrimination on a daily basis in the most ordinary of places: at school, at home, at the barbershop, in the supermarket, in their professions, in church, on the playing field, and, yes, just walking on the street. Saturday’s parade was a moment of pure joy and love.

Since then, I’ve noted the reactions of religious officials. One described the parade as “worrying”. Another implied minority groups should not be protected: “The country as a whole has a right to determine the values it wants to promote.” All of this has been said with a straight face (pun intended). But there was more from the holy men. One official questioned whether LGBTQ people are born gay. “The evidence is nowhere that people by nature are born that way.” He said being gay is a choice. And well, the natural implication was that all of us who marched on Saturday are choosing our subjugation.

Another went so far as to say gay people isolate themselves: “They take up this position socially and isolate themselves that everybody is against them, but what they are practicing is against normal social operations.” This official seemed to suggest it is gay people who are policing the bedrooms of others, who have left colonial-era homophobic laws on the books, who have explicitly inserted a provision in the anti-discrimination law removing themselves from the State’s protection. This is his version of “normal social operations”.

I have some news for these pundits—and for those who feel gay people have suddenly landed from a space-ship. LGBTQ people have been around for centuries. Ask the hundreds of thousands who were persecuted and slaughtered by the Nazis. Ask Shakespeare. And gay people have been in Trinidad long before last Saturday. To claim we are a sudden foreign import is an act of revisionism so willfully blind as to be hateful.

You see, what really upsets religious leaders is not any facile argument about biology (whether you are born gay or made gay the fact is you are gay). Nor is it the question of religious rights (no one seeks to change their private doctrine). What bothers these leaders is not anything relating to some kind of principled preference for ochlocracy (otherwise their own members would rise against them and would be able to recommend changes to backward church doctrines). Nor is it some fidelity to the Bible (which has taught them everything but love).

What really upsets religious leaders is the fact that there are gay people in this country and we are not ashamed.

Andre Bagoo is a Trinidadian poet and journalist. His fourth poetry collection, The City of Dreadful Night, was published in May 2018.