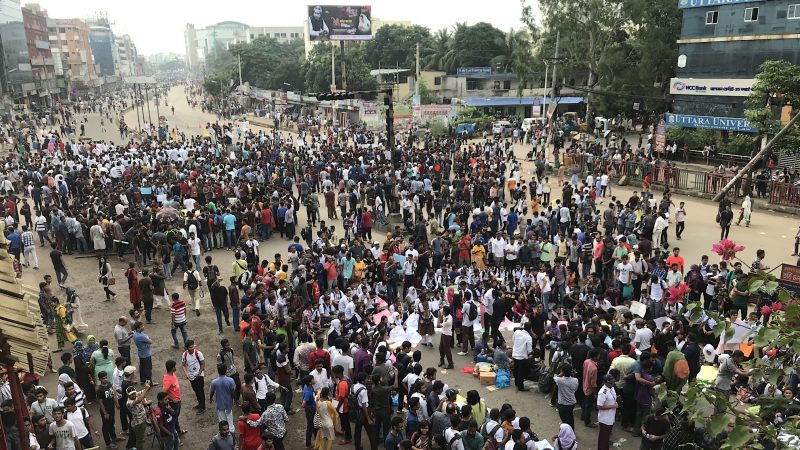 Wearing school uniforms and carrying school bags, tens of thousands of students have spilled their anger while shouting slogans on the streets of Dhaka, Bangladesh since last Sunday, July 29, when two college students died in a road accident.

Diya Khanam Mim (17) and Abdul Karim Rajib (18), students of Shaheed Ramiz Uddin School and College, were killed and a number of students were injured when a speeding bus lost control and ran over a dozen students waiting for transport on Dhaka Airport Road.

Hundreds of their classmates initially took to the streets in protests that gained momentum as thousands more joined in solidarity on a daily basis, shutting down traffic with their demands.

They are calling for increased road safety, harsher punishment for drivers involved in accidents and that authorities ensure that only authorized drivers would get behind the wheel. Parents and non-students have also supported their demands.

The students’ rage was sparked by a remark by Shajahan Khan, the Shipping Minister and executive president of Bangladesh Road Transport Workers Federation when he questioned the high school students why they had not reacted to the news that 33 people died in a bus crash in India on Saturday.

After widespread condemnation and demands for his resignation, Shahjahan Khan apologized for his comments but said he will not resign.

Bangladesh's capital Dhaka is one of the most densely populated cities in the world with 14 million people and standstill traffic. In the 2016 Global Liveability Survey by the Economist Intelligence Unit, which ranks cities for their quality of life, Dhaka ranked 137 out of 140 cities. According to one study, more than 7,000 people were killed in road accidents in Bangladesh in 2017 and more than 16,000 were injured.

A study by the Accident Research Institute of the Bangladesh University of Technology reveals that 37 percent of the causes of accidents were due to reckless driving and 53 percent related to driving over the speed limit. According to a research by Bangladesh Rural Advancement Committee (BRAC), the largest non-governmental organization in the world, 59 percent of drivers in Bangladesh do not follow the rules and many are not aware of street signs and safety lights.

There are approximately one million different types of registered vehicles in the city and according to interviews by the Daily Star, the city does not deploy enough traffic police to manage the heavily congested streets. They are over-worked, underpaid, prone to corruption, and exposed to hazardous situations, the Daily Star reveals.

Moreover, many of the public transport drivers do not even have a valid driving license:

Hard facts in #Bangladesh- For driving over 3.5 million registered vehicles there are only 1.9 people with valid driving licenses. Many of the small public commutes (Lagoona, Tempos etc) are driven by underaged without licensed drivers prone to accidents https://t.co/bTeinc6V2Q pic.twitter.com/AAfBiHBtdT

A recent survey revealed that 87 percent of public transport violates traffic rules in Dhaka. And these buses are not in a great shape (properly maintained) as this video depicts:

The students have said enough is enough by taking matters from police into their own hands. The protesters were seen enforcing traffic rules by checking licenses and pointing out traffic rule violations to unsuspecting drivers. The activists did not spare ministers or police if they violated rules. This kind of intervention has drawn accolades from netizens who have flooded social media channels with praise:

This is an unimaginable scene! It seems the depiction of a (magic realist) story of Faulkner, Juan Rulfo or García Márquez. The students have turned around a car of a minister which was traveling in the wrong side of a road. They have stopped a car of the mayor. The mayor is calling the police. The police is telling, we have nothing to do. What an unimaginable event! The children are asking for papers from each vehicle. Even the cars of the police or the Rapid Action Battalion (RAB), the elite force, were not spared. The almighty police and RAB are forced to show the papers fo their vehicles including the driving license. Now see that the vehicles are plying in a straight line.

Thats how you do it! Those #students are the future of our nation.

The students found that most of the government vehicles do not carry updated vehicle papers nor do the drivers have a proper license.

Shahida Rima declared that the students’ actions filled her with pride:

Our girls ???they can do everything ???? she is just a school kid but perfectly she controlling traffic system ??? lots of love and dua baby ???you made your senior sis proud ???
#RoadSafety #নিরাপদসড়কচাই #Bangladesh#WeWantJustice pic.twitter.com/5fltuecVo7

They are also cleaning the streets, reminded Shahriar Fahim:

Just look at them
They were protesting
BUT? they cleared the road.. they managed the traffic better than anyone. #নিরাপদসড়কচাই #WeWantJustice #RoadSafety pic.twitter.com/vzo9QYjkoF

There have been widespread concerns about the safety of these students protesting on the streets. Dhaka Metropolitan Police (DMP) Commissioner Asaduzzaman Mia has directed the police to tackle the students peacefully without using any force.

However, the police have reportedly used force on students at several points and a number of students were injured.

Police are beating students black and blue at Mirpur, Dhaka.

Spread it people! That's the least we can do for them! #studentsdemandingjustice #StudentProtest #RoadSafety #Bangladesh pic.twitter.com/Sqz0TJMvXu

Lessons for all and a better law

As authorities continue to cautiously observe student protests, their actions have already prompted the Prime Minister’s Office to order a crackdown on rogue drivers.

One of the main reasons that these accidents persist is the impunity of rogue drivers. Existing laws are outdated and a driver who causes a death due to reckless driving faces a minimum fine.

The government has long been trying to update the Motor Vehicle Ordinance 1983. But the effort was pushed back by strong lobbying by the public transport owners and the transport workers’ associations. The good news is student protests have fast-tracked the process and the government has said that it will pass the amendment soon.