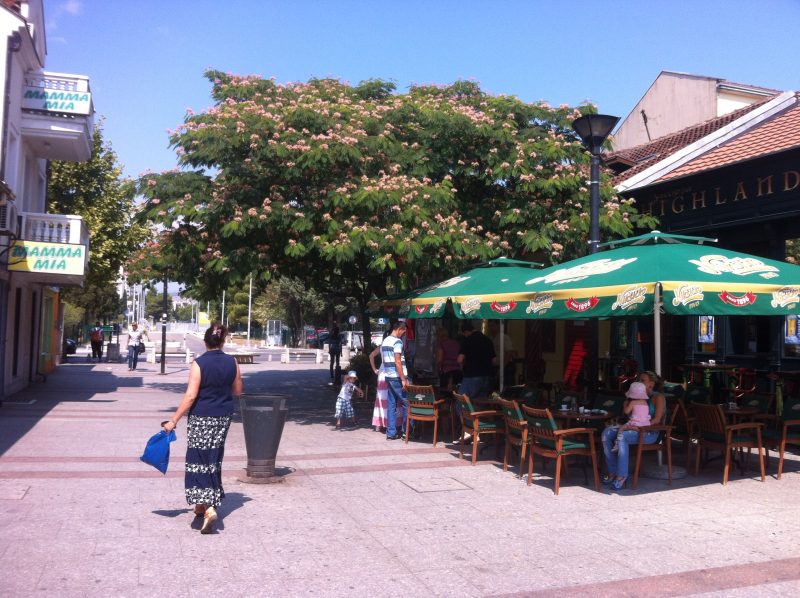 A typical street scene from Podgorica, the capital of Montenegro, where citizens much rather spend time on socializing in cafes under glorious Mediterranean weather, than on plotting wars. Photo by Anton Nosik, via Wikipedia, CC-BY.

A recent quip by US President Donald Trump caused controversy about the Balkan state of Montenegro, after he said that their ‘aggressiveness’ could trigger a Third World War.

Conservative commentator Tucker Carlson on Fox News asked Trump about Article 5 of the NATO treaty, which obliges its members to come to the aid of other member states when they are under attack. He asked why America’s sons should go defend Montenegro, the newest NATO member. To that, Trump said that “Montenegro is a tiny country with very strong people” who “may get aggressive, and congratulations, you’re in World War III.”

Trump says he's bothered by provisions of NATO that require the US to come to the defense of other member countries. pic.twitter.com/2xY1FjBTSn

The quip drew criticism by senior US diplomats and lawmakers as “a gift to Putin”.

Besides, according to an article on Business Insider, the exchange on Fox News misconstrued the way Article 5 works. A NATO member starting a war “could not invoke Article 5 and require US involvement because it would not be an attack on a NATO member but rather an attack from a NATO member.”

A recent history of Montenegro: an apple of discord between Russia and NATO

With a little over 642.000 inhabitants, Montenegro is the smallest Balkan state by population. It became independent in 2006. Its political scene, dominated by the same elite in the last 28 years, has been deeply polarized between pro-European Union (EU) and pro-NATO government and an opposition which includes parties accused of ties with radicals from neighboring Serbia and the Kremlin.

In 2016, Montenegrin authorities announced they prevented a Russia-supported attempt for coup d’etat which allegedly aimed at stopping the country from becoming a member of NATO.

Montenegro eventually joined NATO in June 2017 in spite of disapproval by the Russian Foreign Ministry, which issued an official threat of retaliatory measures.

Along the way, Montenegro had its first Trump-related scandal when the US President appeared to shove the Prime Minister of Montenegro Duško Mirković during a photo op of NATO leaders. While the PM commented that the move was “inoffensive,” the domestic opposition used it as a reason for anti-NATO protests.

Again, the government of Montenegro reacted to Trump in a conciliatory manner, underpinning the dedication to friendship and alliance with the US. They noted that “In today's world, it does not matter how big or small you are, but to what extent you cherish the values of freedom, solidarity and democracy.”

Government of #Montenegro: we are proud of our history, our friendship and alliance with #USA is strong and permanent #USpartnerMNE #WeAreNATO https://t.co/WPn0PMrU0h pic.twitter.com/DOeRutynUm

On the other hand, Montenegrin opposition politician Marko Milačić expressed ‘support for Trump’ for “entering the zone of like-mindedness with the opponents of NATO membership who for years have asked a similar question: why should Montenegrin soldiers go fight wars around the world, defending peoples who they couldn’t find on a map a day before”? He also dismissed the World War III claim as “a joke.”

Milačić is a conservative who is against joining both NATO and the EU, and can be seen burning the NATO flag in the above video. His other priorities include family values and preventing same-sex marriage.

The last time Article 5 of NATO treaty was invoked was by the US after 11 September 2011, leading to the NATO operation in Afghanistan, which includes direct participation by Montenegro since 2010 before it even became a member.

The claim that Montenegro would start a war with a much bigger enemy nation seems to echo a number of jokes that used to be popular in former Yugoslavia.

In the Balkans, Montenegrin people have a reputation of chivalrous resistance to foreign invasions, from the Ottoman Empire to the anti-fascist struggle during World War II. They also have a reputation for being staunch allies when they make a pact of their own choosing.

For instance, the old Kingdom of Montenegro formally declared war on Japan in 1904 as a show of support to its then-ally Russian Empire during the Russo-Japanese War. There is even a legend that a lone Montenegrin officer traveled to the Far East to join the Russian troops as a volunteer and won a sword-fighting duel against a samurai.

As Montenegrin culture grew less militaristic in the decades after World War II, the contrast between its size and the stereotype of proud inflammable highlanders was exploited by a number of jokes, such as the popular example about a hypothetical war with the most populous nation on Earth:

After Montenegro and China declared war, two Montenegrins discuss the situation:
– Hey bro, do you know that we’re in war with the Chinese?
– So I’ve heard. How many are they?
– A billion and two hundred million.
– Oh my! How shall we find a cemetery big enough to bury so many people?

There’s no information on how Trump became familiar with the “strong Montenegrin” stereotype. One theory is that his wife Melania, who grew up in Yugoslavia, could have been exposed to this piece of popular culture, but there’s no public record evidence that Trump has gained such local knowledge about the Balkans from her.

Recent resistance to the coup attempt has also shown that Montenegrin resolve to stand up to hostile influences (this time, Russia) is no joke, and could’ve made an impression on Trump’s US advisors, or on Russian president Vladimir Putin, with whom he recently had a private talk.