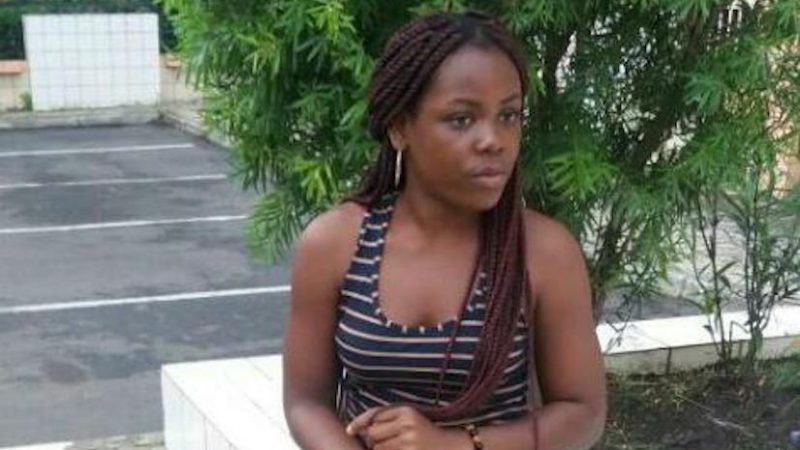 Juliana Mbengono: “If there were no differences between women and men then no one would think of me as a feminist, but given the inequalities that we experience I feel obliged to reclaim my rights and I do it through my literature.“

Juliana Mbengono Elá Avomo is a journalism student, an assistant director of a daycare center, and a Literary Bud (in Spanish Capullos Literarios, meaning cocoon, flowerbud, and also jerk in colloquial Spanish). She says so herself. She founded a collective of poets in Equatorial Guinea together with two classmates in 2015, and they chose the name Capullos Literarios because they are novices and they “haven't yet been recognized as writers. They stay in the shadows but they love to write, they put everything they have into it and they put it to use every day.”

Buds are shy by nature, so it's hard for them to recognize themselves when they have started to blossom. That's why Juliana keeps herself humble, despite having won several literary competitions, having gotten two of the theatrical plays she wrote to be performed, and having become the coordinator of Crazy for Culture (Locos Por Cultura – LPC- , in Spanish) in the capital city of Malabo. The organization brings together artists who work with different modalities from around the country. According to Juliana, the goal of Crazy for Culture is to “promote the creation of spaces for young people to interact, with the aim to improve their artistic abilities and promote social leadership.” 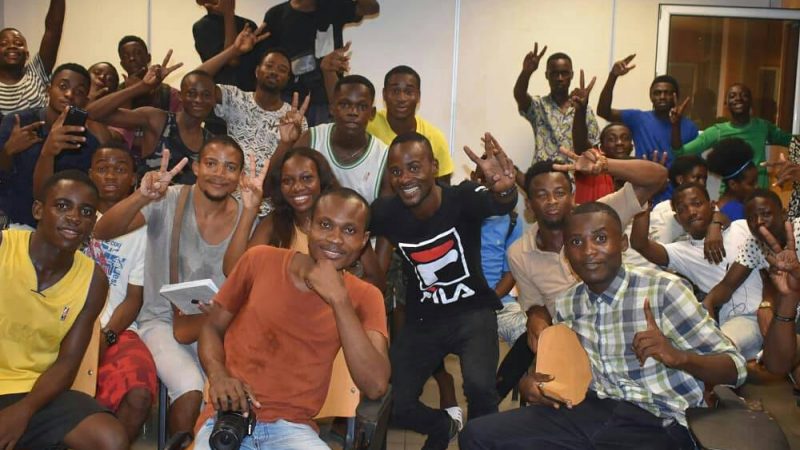 Participants of Crazy for Culture (Locos Por Cultura, – LPC- in Spanish), a collective formed to “promote the creation of spaces for young people to interact, with the aim to improve their artistic abilities and promote social leadership.” Photograph courtesy of Locos Por Cultura collective, used with permission.

The organization doesn't have a set number of members or artistic communities. At the moment, they are composed of Literary Buds; theatre group Speaking and Biyemyema; visual arts collectives EG-Pencil and Hangart; photography group Photos With Lyrics; and many independent artists such as Eusebio, who does portraits, or Mariano Ebana Edu (also called Black Bey), Benjamín Ndong (Jamin Dogg) and Lil Jojo, who are singer-songwriters and rappers.

We conversed with Juliana about the activities of the Crazy for Culture collective, the struggles for equality between men and women, and the value of culture as a key component in the development and growth of young people and the society they live in.

GV: One activity that has really caught my attention are the street readings. How do people react when they see all of you?

JMEA: The project “Reading Afternoons” is an initiative organized by Literary Buds to promote reading and writing among citizens. Many people think that reading is an activity reserved for educated people and so some people feel embarrassed when reading in public or simply consider it a waste of time. In fact, people say “if you want to hide something from a Guinean put it in a book.” We believe reading can produce changes in society, not only through the ways it can nourish the vocabulary of those who read but also the effect is has in many other areas of their lives.

This project is one of our great achievements because over time, along with LCP, we have been able to create a tradition in Malabo and Bata, the most important cities of Equatorial Guinea. Many people are already familiar with these literary festivities, they show interest and they are encouraged to read. That's how a good portion of the youth that participate regularly have been able to overcome the fear and nerves they used to feel when reading in public. 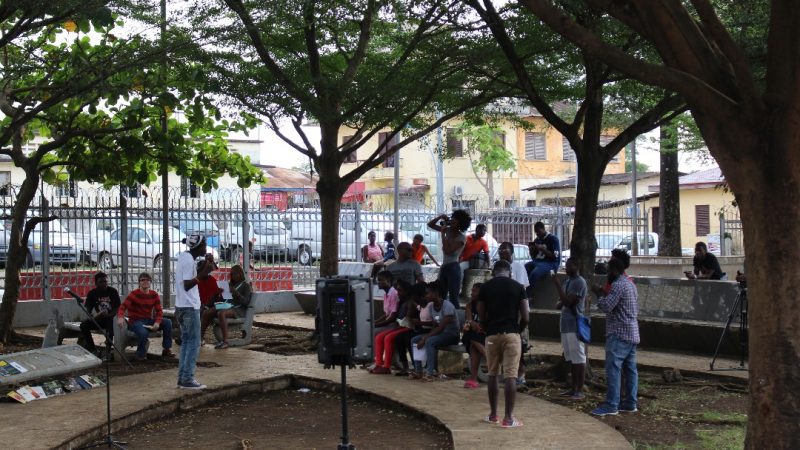 GV: Two of the three spokespeople for LPC are women. Why is that?

JMEA: In Crazy for Culture (LPC), responsibilities are assigned based on the degree of interest and the commitment each one gives to the collective. Roles are not random nor are they based on gender.

GV: However, even though you deal with various themes in your texts, you write a lot about the situation of women. Do you consider yourself a feminist? How does that feel in Guinea?

JMEA: I wouldn't define myself as a feminist. I believe that everyone deserves to be respected and we wish to be treated the same as everyone else. If there were no differences between women and men then no one would think of me as a feminist, but given the inequalities that we experience I feel obliged to reclaim my rights and I do it through my literature.

To ask me whether or not I am a feminist is not a problem for me, but to identify myself as such in Guinea is another matter. Sometimes it bothers people who think feminism is the feminine equivalent to machismo. And lately I feel that labeling yourself a feminist has become a trend, particularly for those who think that being a feminist implies being intelligent, modern, and brave.

GV: What women role models do you have in the country?

JMEA: I look up to three or four women role models. The first one is Teodosia Mónica Angue Bivini, a stranger who became my mentor, boss, friend, and counselor. In Mónica, I find the example of a working woman who seems utopian, she is so entrepreneurial that she sees opportunities for employment and business where no one else imagines it. She is the founder and president of the non-profit organization IMGE (Women's Initiative for Education in Equatorial Guinea), and she is also the president of the association of Guinean members of YALI (Young African Leaders Initiative). She holds a degree in business administration with a specialization in human resources, and she works as the director of human resources in the Office of the Ombudsman, among many other things.

JMEA: Also, there is Trifonia Melibea Obono Ntutumu, writer, journalist, gender researcher, and founder of the organization “We're Part of the World” (Somos Parte del Mundo, in Spanish), dedicated to defending the rights of non-heterosexual people:

JMEA: Meli [Trifonia Melibea] is so convinced in her principles that the wave of insults, negative opinions, disrespect and threats that fall on her constantly don't ever make her give up. She writes so much that there have been times when she has published two novels in less than five months, and her writing always centers around the situation of women and of non-heterosexual people in Equatorial Guinea. My new favorite novel is her book “The albino girl of money” (La albina del dinero, in Spanish), our lives are reflected in those pages.

JMEA: The third one is my aunt Melania, who sets the example on patience and solidarity. She took care of me and my little brothers when she didn't have enough to take care of herself. Even today she is still the umbrella that covers our enormous family when the rain comes down.

The last one is my mother. Her life and way of understanding things have influenced me greatly. Her tolerance has helped me to accept that no one deserves to be judged if they are not harming anyone and that I should never criticize others for what they say or do.

GV: How close are you to your dreams, and how far away are you from reaching them?

JMEA: In the future I would love to be a journalist, create a magazine, and launch a school for literary writing.

For now I am working on some projects in collaboration with IMEGE (Women's Initiative for Education in Equatorial Guinea), one of which is “A Night Among Writers” that will consist of workshops to exchange writing ideas and techniques among writers. We will also include sessions to teach public speaking and how to launch. Another one is “Youth Date,” a radio program dedicated to young Equatorial Guineans and to entrepreneurs.

I trust that I will be able to reach many of my dreams, that's one of the things that makes life seem so wonderful to me.