Filipinos urged to #BoycottNutriAsia for attacking the strike of workers 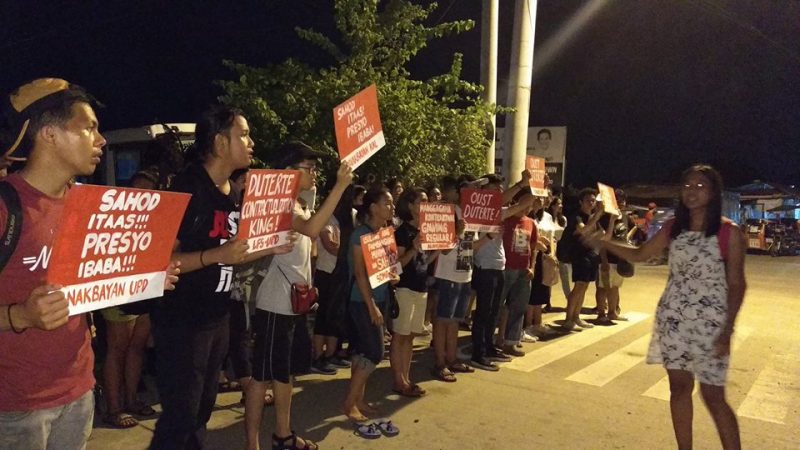 Youth and students hold indignation rally in front of Meycauyan, Bulacan police station after striking NutriAsia workers and their supporters were violently dispersed and arrested on July 30, 2018. Photo by Anakbayan, used with permission

Filipino activist groups have launched a boycott campaign against popular Filipino condiment company NutriAsia for violently dispersing the strike of its workers.

On strike for the past two months, NutriAsia workers demand the regularization of contractual or temporary staff. On July 30, NutriAsia workers and their supporters had finished conducting an ecumenical mass in front of the Nutri Asia factory, where a picket line had been set up, when the combined forces of the police and company security began hitting the crowd with clubs, anti-riot shields, and stones.

In the Philippines, short-term employment practice, whereby the employee is terminated just before legally being eligible for regularized working status, is called “Endo contractualization“, the word “endo” referring to “end of contract”.

NutriAsia hires over 1,400 workers but only 100 are regular employees with the security of tenure, health insurance, and other work benefits. The majority of the workers face threats of illegal dismissal, underpaid overtime work amounting to 619 Philippine pesos (US$11.65) for 12 hours, salary deductions, repression of the right to organize unions, and substandard workplace conditions.

The Philippine Labor Ministry has ordered NutriAsia to regularize at least 900 of its workers. However, the company management says this is not possible because, according to them, these 900 workers are actually employees of a third-party agency and not in NutriAsia’s employ.

The strike comes in the wake of President Rodrigo Duterte’s (so-far) failed promise of abolishing contractualization practices in the country, which has led to an explosion of labor struggles seeking the regularization of workers in big companies such as telecommunications company PLDT and fast-food giant Jollibee.

Nutriasia is famous for condiment products like ketchup, vinegar, soy sauce, cooking oil, and fruit juices that have become a staple in Filipino households. Its founder Joselito D. Campos, Jr. is also the Chief Executive Officer of Del Monte Pacific Ltd which runs a global operation of pineapple plantations in the Philippines and a dozen factories in the USA, Mexico, and Venezuela.

Among those critically hurt on July 30 was Leticia Retiza, an urban poor leader, who was seen in a now-viral photo with blood from her mouth spilling on her blouse and scarf. At least 20 were hurt during the dispersal.

An old woman is badly wounded on the face when the picket was violently dispersed after an ecumenical mass.

How violent are the Meycauayan police and NutriAsia security guards. Watch the video.

The police arrested 19 strikers and supporters, including youth leaders and volunteers from the independent media outfit Altermidya. They were brought to the Meycauayan Police Station and charged with illegal assembly, alarm and scandal, and physical injuries. Meycauayan Town Police Chief Supt. Santos Mera, who ordered the dispersal of the NutriAsia workers’ picket, also claimed that they recovered guns and drugs from the arrested workers and their supporters.

Bulacan Provincial Police Chief Senior Supt. Chito Bersaluna took the cudgels for the police involved in the dispersal and filing of charges against the striking workers, saying it was the protesters who hurt the guards of NutriAsia.

Bersaluna was chief of the Caloocan City police force before he was sacked after public outrage over the summary killing of teenager Kian Delos Santos last year. Police reported Kian was a drug dealer who fought back in a shootout with police but CCTV recording showed him being dragged by police before he was found dead the next day.

NutriAsia asserts that it was the workers and their supporters who started the “violence” by firing a gunshot in the air and throwing stones at police and security forces. However, videos and photos posted by advocates that have been supporting the striking workers undermine the statements made by the company.

The arrested strikers, their supporters, and journalists were released on August 1. The legal battle, however, is not yet resolved and the fate of the temporary workers is still uncertain.

Before the July 30 incident, the striking NutriAsia workers’ picket line had also been violently attacked last June 14, resulting in the arrest of 23 workers and their supporters, including a high school student.

In response, some Filipino shoppers and netizens turned to social media expressing support for NutriAsia workers and calling for the boycott of NutriAsia products:

Mothers and fathers who are always doing grocery, I'm asking your help to #BoycottNutriasia. Here are their brands.

suka means “to vomit” but it also pertains to a condiment or vinegar. an example of a brand of suka is datu puti which means we should #BoycottNutriAsia and i think that’s beautiful

The violent dispersal of at the picket of striking NutriAsia workers only shows how this government treats its human resource. Instead of protecting our workers, this government became a tool for repressing the workers rights to protest. #BoycottNutriAsia

I don't mind having my food tasteless as long as I support against your food company, NutriAsia, for being a disgusting, inhuman, and immoral. #BoycottNutriasia

Capitalism is not being able to afford paying 1k workers proper wages and benefits, but can afford paying the police to beat up even grandmas, plant drugs on arrested unionists, arrest journalists, and burn workers’ belongings #SupportNutriAsiaWorkers #BoycottNutriAsia

When you see it. From the FB of jong.