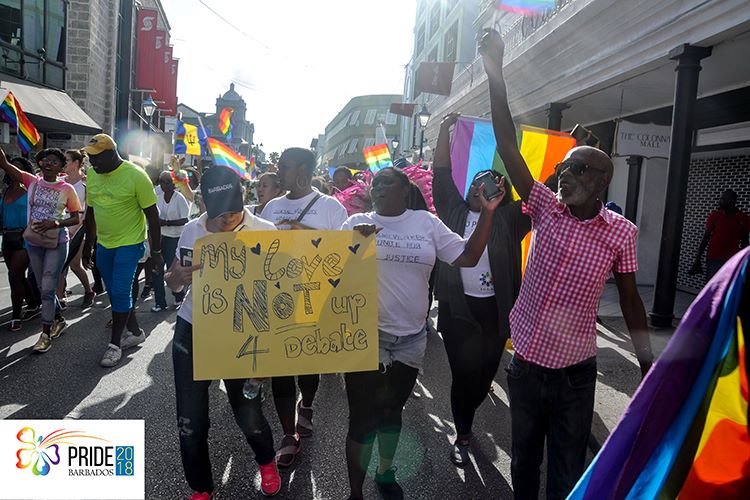 Sunday, July 22, 2018, marked the first major, public LGBTQ Pride march in Barbados. This has been a long time coming. There have been Pride events in the past: June and July usually see a few parties, and 2017 saw both a small-scale demonstration for inclusivity outside Parliament and an equally small counter-protest to a religious rally with underlying homo-antagonistic messages.

This year, however, the Barbados Pride Committee, which comprises representatives of several local LGBTQ organisations and groups, divvied up the responsibility for a series of pride events during June and July. Ro-Ann Mohammed, co-director of Barbados Gays & Lesbians Against Discrimination (B-GLAD), was tasked with organising the march and managed to rally a modest yet powerfully visible group comprising an estimated 120–150 members of the Barbadian LGBTQ community and allies. This is no small feat. 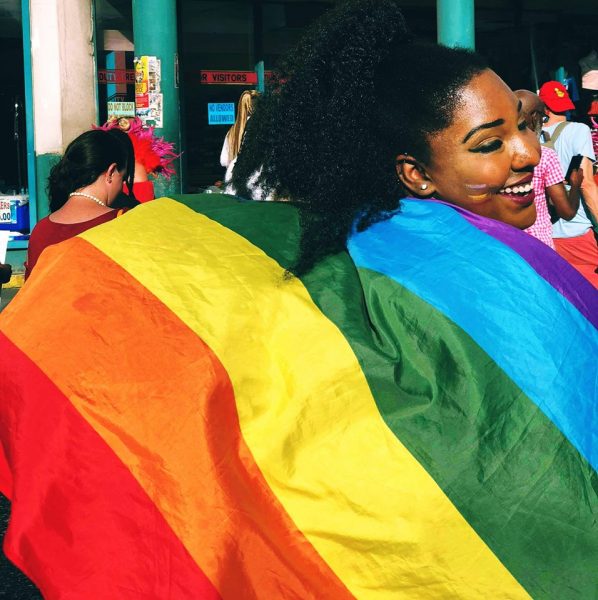 Ro-Ann Mohammed, co-director of Barbados Gays & Lesbians Against Discrimination (B-GLAD). Mohammed was the target of much criticism and vitriol in the lead-up to the July 22 parade. (PHOTO: Mandy Cummings. Used with permission.)

In the weeks leading up to the march, Mohammed received an impressive amount of bigoted social media vitriol, along with credible threats to her safety and that of march participants, posted both on her personal Facebook page and the B-GLAD page. It was as if she had become the de facto lightning rod for hatred against the community. She also received criticism from members of the LGBTQ community itself, some of whom did not believe that Barbadian society was ready for such a public display. Additionally, religious leaders publicly condemned the march, using typical anti-LGBTQ buzzwords like “gay agenda,” and quoting scripture. Barbados still maintains anti-sodomy laws, and the public/media conversation around the rights of LGBTQ people is still dominated by conservative Christian sentiment. It is against this backdrop of probable threat, potential lack of support, and general societal antagonism that the march took place. 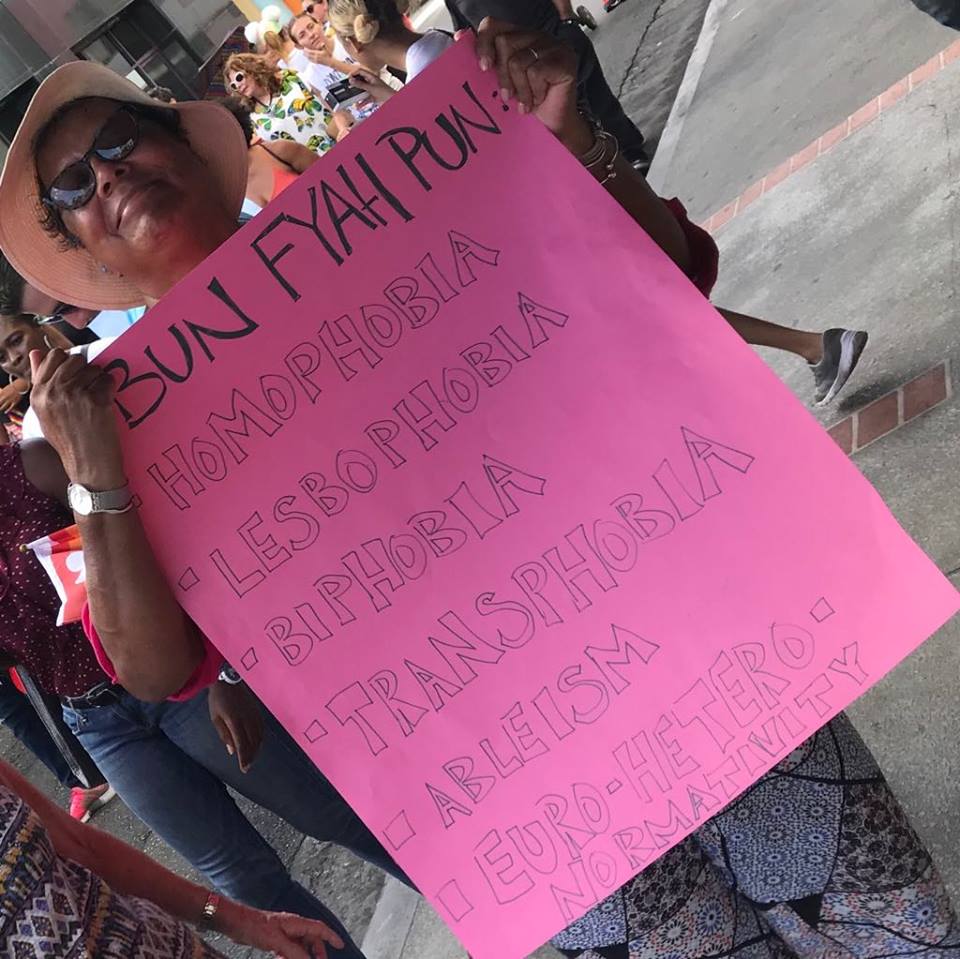 A participant in the July 22 Pride parch in Barbados repurposes a phrase popularised by Jamaican reggae artists in homophobic song lyrics. (PHOTO by the author. Used with permission).

As the march prepared to head out, organisers cautioned that we were liable to encounter vocal opposition along the route—something of which most of the marchers were fully aware, having witnessed the threats and bigotry of the preceding days and weeks. We were also given one ground rule: do not engage. So this sense of caution, along with a vague feeling of apprehension, accompanied us on the march. However, this slowly faded into the background as we walked and danced through the streets and it became clear that we were meeting no open protest or hatred.

I asked Mohammed to describe her gut feelings during the march. She said she experienced “overwhelming relief” that there was no violence or open conflict and was “pleasantly surprised” by the whole experience. She had expected that “something bad was going to happen,” and when it didn’t—when all she saw was positivity—the experience became “sort of surreal.”

My partner and I shared this surreal sentiment. We had dithered about whether or not to attend the march. Although we are relatively open about our sexuality, the thought of national visibility is always daunting. Our planned compromise was to meet the marchers en route to the end-point, stand on the sidelines, and cheer. The march did not leave its starting point on time because both organisers and marchers were being interviewed by the media. We decided, instead, to spend some time at the start point and leave as the march got underway. Two and half hours later, we found ourselves at the march’s end point, caught up in an environment that was inclusive, empowering, celebratory and filled with love. We had been almost unconsciously swept along. Somewhere along the way, we forgot our concerns about visibility and revelled instead in the joy and exuberance of the experience. Other marchers felt similarly.

I have always seen myself as an ally to equality causes, but as someone who quite recently came to identify as pansexual, Pride became that much more special. I’m lucky to have lots of support from my close circle but I know many people don’t have that, and it warmed my heart and made me a little emotional to experience the sheer joy on the street. Everyone was dancing and singing and hugging each other and laughing, without any worries or fear, at least for those few hours, about rejection or judgment. It was empowering and beautiful.

Christopher Reynolds, another marcher, described something even more visceral:

We were right outside Scotiabank and ‘I’m Coming Out’ played – and down a side street comes Didi [Winston, a popular Barbadian LGBTQ activist and performer] wearing a pride dress and hoisting an enormous pride flag. And she’s running hard in heels. The entire crowd explodes. It was our party. It was our moment. I couldn’t even hear what slurs people were yelling at us, buoyed up by love. Who could step to a rainbow woman? Who could step to any of us when we stand together?

Khalil Goodman, a photographer and advertising executive, had a more measured response:

… the Pride parade was beautiful, and more significant than can be articulated. Those who oppose the Barbadian LGBT… community say “we allow you to exist as long as you are invisible, don’t speak up for yourself. Isn’t that enough?”

The Pride parade was Barbadian LGBT folk choosing to say “we are here, we are not invisible and we are not settling for existing. We are happy, we are here and we will not just exist; we will LIVE just as fully as everyone else.” 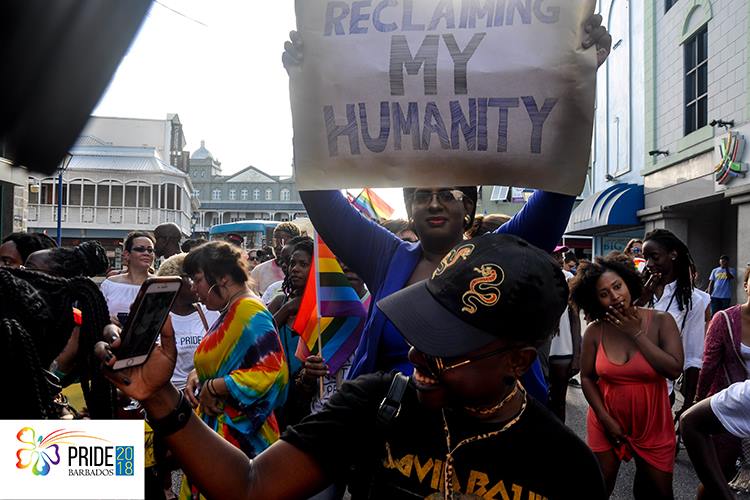 For the marchers on the day, however, Pride became an intensely personal, yet almost paradoxically public experience. Beyond the obvious social statement being made, there was a celebration of our collective humanity, an assertion of our individual selfhood, and a display of the solidarity that we enjoy despite our differences. What this means for the larger Barbadian society remains to be seen, but for the LGBTQ community, whether or not they participated in the march, this was an affirmation and, perhaps, a significant step towards both owning and showing our beautiful, diverse normalcy. 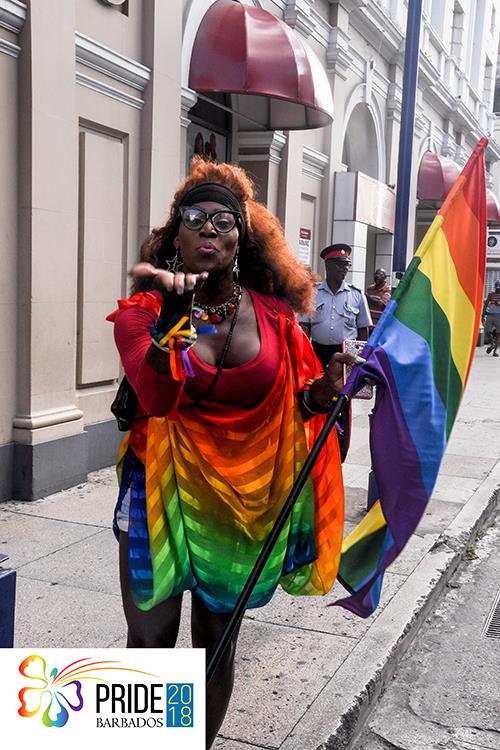 A participant in the historic July 22 Pride parade in Barbados. (PHOTO: Khalil Goodman for B-GLAD. Used with permission).