Sharing a passion for permaculture in Suriname 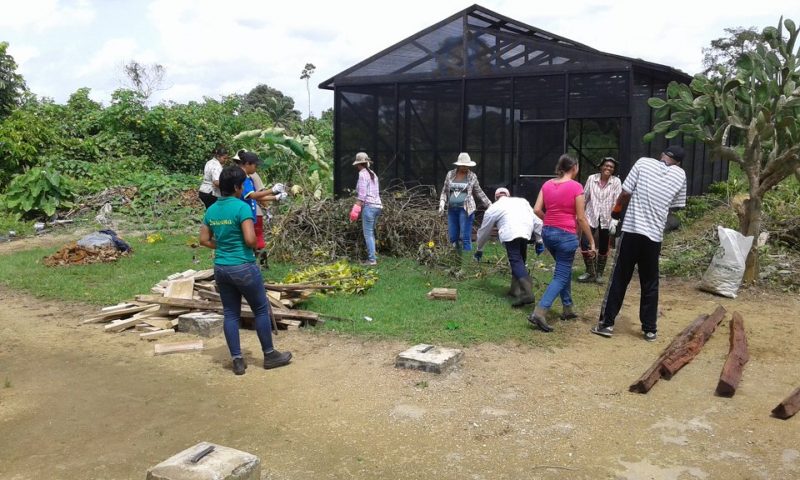 A group of permaculture enthusiasts at work in Kampong Baroe, Suriname. Photo courtesy Permacultuur in Commewijne, used with permission.

For the past three years, Alex Yakaumo has used knowledge of permaculture to educate people about the natural environment in Suriname.

While chemicals are commonly used in Suriname's agricultural sector, there are opportunities for sustainable agriculture to take hold in the country, according to a 2012 report by the International Institute for Sustainability. However, there some constraints to overcome, and one of them is lack of training.

Yakumo is helping to change that. After receiving his Permaculture Design Certificate (PDC) from the Caribbean Permaculture Research Institute of Barbados, he decided to dedicate his time to lecturing about self-sustaining agricultural ecosystems and hosting workshops in Commewijne, where he lives.

Located on the right bank of the Suriname River, his community has since got involved with other like-minded organisations more inland, as well as with tribal villages. Yakaumo says he never pressures people to learn about the permaculture lifestyle; rather, he waits until they are ready to receive its principles — and from there, the education begins.

“It is something that has to come from the people because it is for the people”, he says. “So I'm not really forcing [the issue], I'm just offering this opportunity and if people are ready, they can participate.”

Some of the greatest rewards that people can reap from practicing permaculture include self-sustainability and not exposing themselves or the earth to harmful chemicals.

On Yakaumo's Facebook page Permacultuur in Commewijne, people can get updates and reach out if they would like to attend a lecture or workshop.

He spoke with Global Voices about his work. 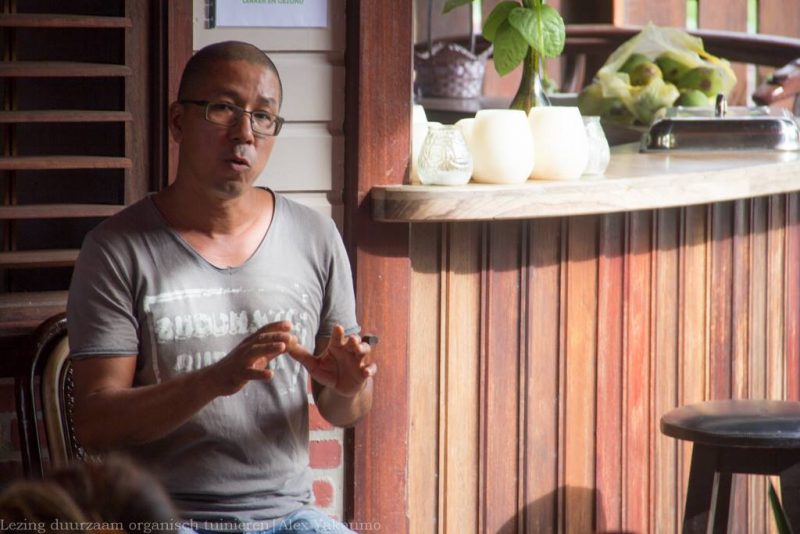 Global Voices (GV): Explain the benefits of permaculture and why you took an interest in it.

Alex Yakaumo (AY): I came to Suriname in 2011 to live self-sustainably. Before that, I lived in Holland, but I travelled for a few years, in India mostly, and I really got the taste of being free — just self-supporting — and when I came to Suriname, I eventually started looking for ways to grow [food] in a sustainable way, and this is how I came across permaculture. I started to look for courses, and the second course was just starting in Barbados at the Caribbean Permaculture Research Institute. So, I was quite lucky.

To me, permaculture is bringing the different components of nature together in such a way that they enhance each other for the benefit of all beings. 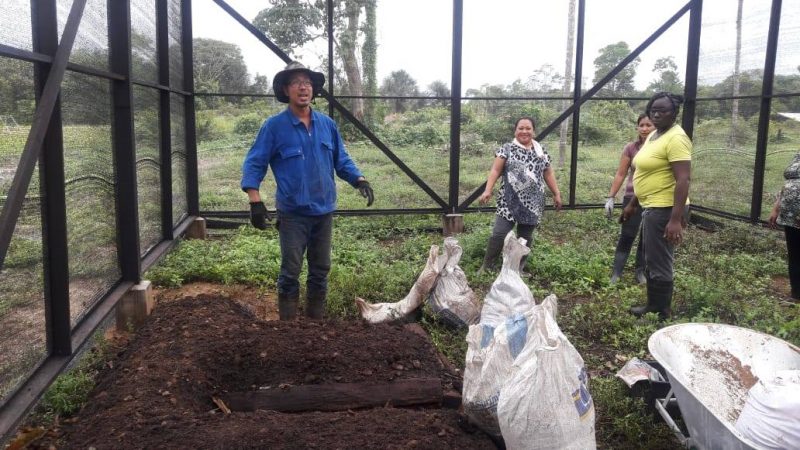 Alex Yakaumo with members of the Commewijne community at a workshop. Photo courtesy Permacultuur in Commewijne, used with permission.

GV: What specific areas do you focus on when educating people?

AY: I'm focusing now on teaching people how to grow without [using] synthetic products. It's the starting point — because most people in Suriname only know how to use chemicals — chemical fertilisers and herbicides are so ingrained in the system. My first aim is really to get people to understand the purpose of the soil itself, so they can start to appreciate the benefit of healthy soil and stop spraying. 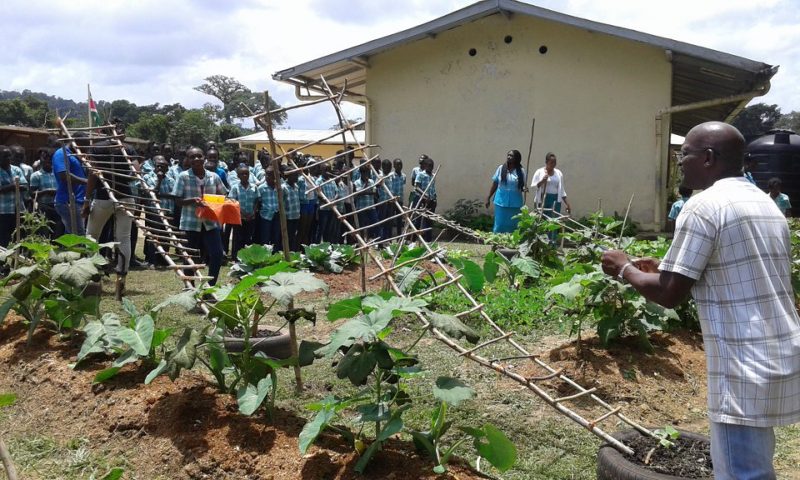 School children learn about the principles of permaculture at one of the school garden projects with which Yakaumo is involved. Photo courtesy Permacultuur in Commewijne, used with permission.

GV: How many people have you got involved?

AY: Up to 1,000 people now. For the last two months I’ve been busy every weekend, training teachers. I'm also doing school garden projects with two organisations. There's a big interest in permaculture here, because most people know that all the vegetables are being sprayed [with chemicals] and they really want to learn an alternative method, but nobody is sharing this knowledge. You just have to know the dynamics of nature, so we can let nature do the work for us instead of fighting against it. For such a small population [in the area], most of the time my lectures are full. Most of the time, a lot of people come because they are so interested in learning how to grow. 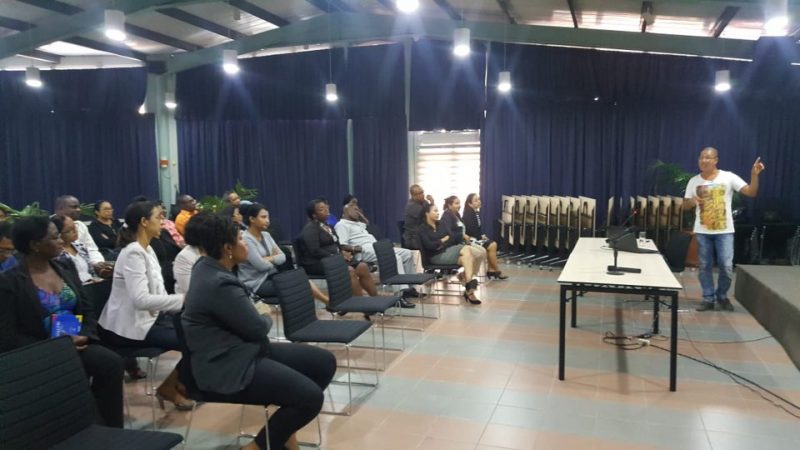 GV: What approach do you take when teaching people about permaculture? 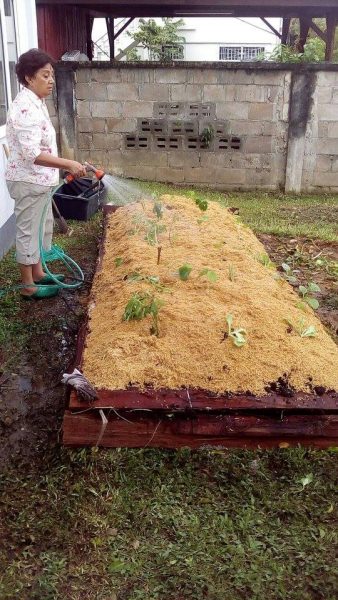 A woman waters seedlings on a raised bed that has been built with local resources, using permaculture principles. Photo courtesy
Permacultuur in Commewijne, used with permission

AY: I do it in two ways. I do a lecture, and based on the lecture, they have the opportunity to do a workshop. In the lecture, I am sharing an introduction about just one part of permaculture, which I call ecological gardening. That's the biggest interest now for people: how to grow their own vegetables. In my talk, I stress the importance of taking care of the earth, and explore the different dynamics of Mother Nature in a very basic way.

I explain what soil is and talk about its importance. Then, I show them the pictures from my own garden — including composting — so they see what is possible. I talk about fertilisers; I talk about different herbicides and pesticides, and then I invite them to join the workshops so they can learn — the easy way — to set up their own garden, all with local resources, like branches, stems, and leaves.

It's not so technical; it's really about giving people the experience, so they can relate to the concept a lot better.

It's just opening people's eyes to what they already have — most of them have seen this already, but they couldn't connect the dots. I think permaculture really speaks to people. Still, I'm always surprised at the amount of people who come to the lectures.

GV: What is the most rewarding aspect of your work?

AY: I enjoy seeing the pictures people share with me of their own gardens. I especially like to see when the children in the community are learning to grow plants in this way. Then is when I really feel the satisfaction that comes from doing all this work.

GV: Do you use social media to help raise awareness or increase participation?

AY: Facebook is the most used social media platform over here. I'm not a big fan of it, but in this case it's the best way to reach people. I'm looking for help from social media professionals who like to do this sort of posting, so I can just oversee what's happening. 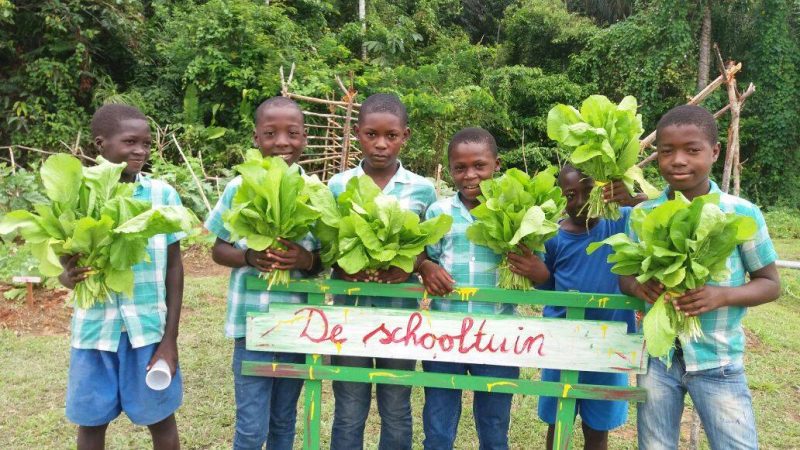 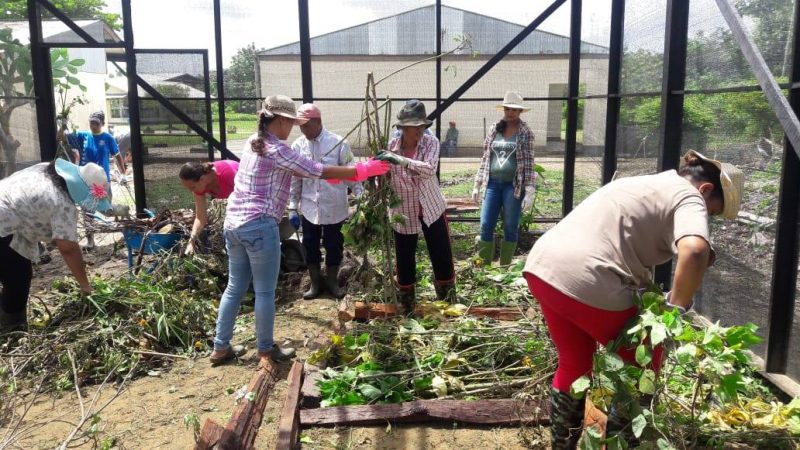 One of the greatest benefits of permaculture is that it fosters a sense of community. Photo courtesy
Permacultuur in Commewijne, used with permission.

GV: What goals do you have for the future?

AY: I am looking to set up an organisation called Wholesome Living. Wholesome Living consists of five pillars: care of the mind, physical exercise, knowledge of food, permaculture or living in harmony with nature, and contributing to society in a beneficial way. This is my way of life.