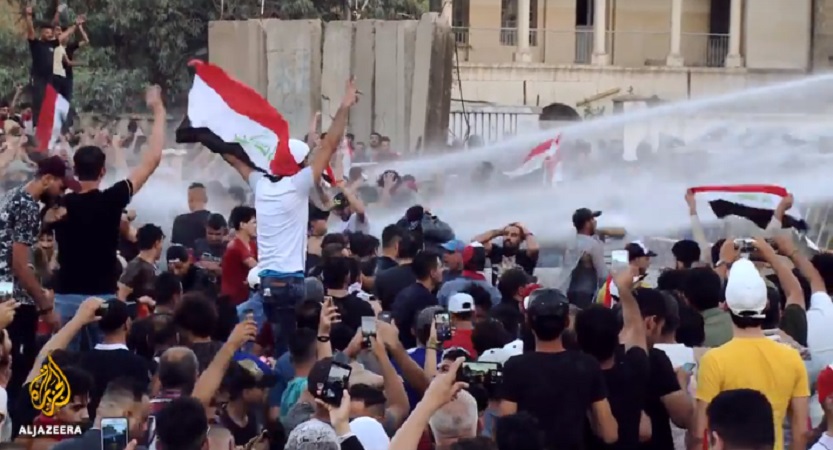 Screenshot of Iraqi protesters waving flags and chanting as security forces spray them with water cannons. Image: screenshot from Youtube video ‘Anger mounts in Iraq as protests spread to the capital Baghdad’ uploaded on July 21, 2018 by Al Jazeera English.

Summers are long and sweltering in the southern Iraqi city of Basra, where temperatures frequently rise above 37 degrees Celsius. So it came as no surprise when its residents took to the streets on July 8, after Iran cut back energy supplies.

Iran provides 1,400 megawatts of electricity to the region, roughly 6 percent of Iraq's estimated demand — but in a country that long struggled to meet its electricity demand, every megawatt counts.

Iraqis are no strangers to protests, having taken part in recurring anti-government demonstrations in recent years. They have also become something of a summer tradition when the unbearable heat triggers frustrations and forces people out into the streets.

With the decrease in electricity intensifying the effects of a brutal heatwave, protests quickly spread to nine other southern provinces, including Najaf, Karbala, Dhi Qar, Babil, and Maysan. They have also evolved to focus on other issues that also undermine quality of life, such as water shortages, growing poverty, unemployment, rampant corruption.

Basrawi activists and tribal leaders organized their movement by creating “the Coordination Board for Peaceful Protests and Demonstrations in Basra” to produce a list of demands and to unite and keep their movement non-violent. Foremost on the list of demands is a timetable to restore a reliable supply of water and electricity to the city.

Demonstrations peaked in Basra when protesters blocked roads to paralyze activities at the Umm Qasr seaport and West Qurna, the largest oil field in Iraq, and forced the closure of the Safwan border crossing with Kuwait. In Najaf protesters stormed airport terminals and moved onto the tarmac diverting flights and halting air traffic.

Anti-Iran sentiments were also in full force as protesters burned photos of Iranian leaders, including Ruhollah Khomeini, leader of the Iranian Revolution, and current Supreme Leader Ali Khamenei. They chanted slogans against Iranian interference and set ablaze different political party offices backed by Iran, including Badr, Katiab Hezbollah, and Asaib Ahl al-Haq. Protesters accused these parties of being Iranian agents facilitating the demise of the Iraqi economy, cutting off electricity and water, and consuming Iraqi oil while Iraqis suffer.

Meanwhile, the Iraqi government has given conflicting reasons for Iran’s decision to cut power. Prime Minister Haider al-Abadi claimed that power cuts were due to an electricity shortage afflicting Iran; however, according to Mosaab al-Madras, spokesman for the Ministry of Electricity, Iran's rationale behind the move is due to Iraq’s unpaid debts.

Adel Jerian, undersecretary of the Ministry of Electricity, put forth another theory for why Iran cut back power supplies. He suggested that since the United States pulled out of the Joint Comprehensive Plan of Action (JCPOA), more commonly know as the Iran nuclear deal, Iraq can’t comply with debt repayment in the wake of new sanctions imposed on Iran. He also indicated that the two countries are engaged in negotiations to find a new mechanism to pay back Iraq’s debt.

‘They cut off the internet so they can beat us.’

The Iraqi government has responded to demonstrations with a heavy hand. Security services were dispatched to control the crowds using water cannons, tear gas, and, in some cases, live ammunition.

Medical sources have told Al Jazeera that at least 14 people have been killed since the protests began. The Iraqi Observatory for Human rights (IOHR), a Baghdad-based rights monitor, estimates that 831 people were “injured or killed”, but did not offer specification on the number of deaths versus the number of people injured.

A Human Rights Watch (HRW) investigation deemed the government’s response an excessive and unnecessary use of lethal force. Witnesses speaking to HRW observed security forces hitting demonstrators with rocks and beating them with metal sticks and pipes.

Protesters also reported that the government temporarily shut down the internet on July 14, an accusation that was later confirmed with technical tests by NetBlocks, an internet censorship analysis group. Social media services (including Telegram, Facebook, and Instagram) also were blocked, in what may have been an attempt to prevent civilians from sharing images of security forces using violence.

A protester spoke to Amnesty International about his experience:

They wanted to beat everyone and left no-one without injury. One person was shot in the leg and I saw one person bleeding from his eye. As we retreated, one of them [Iraqi Special Weapons and Tactics] grabbed me and one beat me. When I struggled away, he threw the baton at me and broke my arm. They cut off the internet so they can beat us.

Prime Minister Abadi has denied these accusations. Internet access has since been restored, but some social media sites are still inaccessible.

The Iraqi government is also allegedly conducting a large-scale operation to find and arrest protesters. According to Hesam al-Hashemy of the IOHR, “Iraqi authorities arrested 348 people for taking part in the rallies, 314 of whom were released later after signing a pledge that they will not stage or call for any protests afterward.”

In an effort to quell protests, Prime Minister Abadi has formed a committee to investigate their demands, in addition to promising jobs for those living near oil fields and three billion dollars to improve public services in Basra.

Muqtada al-Sadr, prominent Shia cleric and winner of May’s parliamentary elections, has been supportive of demonstrators. He has called for a delay in government formation talks until protesters’ demands are met, and suggested to set up a committee to talk with protesters.

Former Prime Minister Ayad Allawi believes the formation of an interim government is the way to meet protesters needs. He also alleges May’s election was rigged and is pressing for a new vote to take place.

Few politicians have addressed the protests, but it seems that those who have are willfully ignorant of what these protests are about.

All signs indicate that southern Iraqis are not asking for a temporary fix, but for an overhaul of a political system that has left them without suitable drinking water, reliable electricity, or gainful employment.