From state censorship to western stereotypes, an interview with Iranian artist Maryam Palizgir Maryam Palizgir is a visual artist. Photo by Mohammad Jahangir and used with permission.

This is part of a series done by Omid Memarian for Global Voices called How globalization, identity and culture intersect in art.

Maryam Palizgir is an Iranian-born artist and designer who currently lives and works in the U.S. Her work is interdisciplinary in nature, combining two and three dimensional drawing, sculptural painting and installations focusing on the interaction of geometric abstract forms, color, reflective objects and the layering of grid-like materials.

Palizgir, who currently teaches art at the Ernest Welch school of Art at Georgia State University, has exhibited in Iran, several European countries, the U.S. and Russia, and has been the recipient of numerous international and Iranian awards.

Her current work, Folded Mystery, explores how knowledge is exchanged, how perception widens perspective, and how observation deepens the understanding of reality. “I seek works of art that activate once the viewer is involved,” says Palizgir. “Folded Mystery is about challenging viewers’ perceptions.”

In this interview Palizgir talks about her work, her experience as an Iranian artist, and the constraints this has presented due to both state censorship of artistic expression in Iran and Western stereotypes of Iranians in the U.S.

Excerpts from the interview follows:

Omid Memarian (OM): How was your experience of attending art school in the United States different from Iran?

Maryam Palizgir (MP): The graduate program here in the U.S. is designed for artists who want to incorporate media into their artistic practice and want to expand into areas such as performance, installation, interactive and relational art forms. In my MFA studies, my professors encouraged me to find my own style through three years of course work, art history seminars, interdisciplinary seminars and studio practice. The curriculum for the MFA program in the US is based on developing critical thinking, studio practice and critiques, which are essential for a contemporary artist to develop their fine art vocabulary. 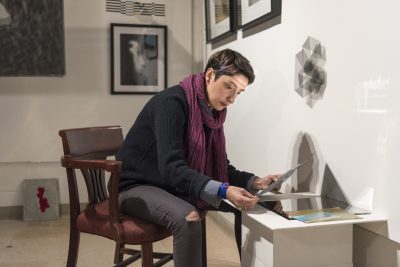 Palizgir in her studio. Photo by Mohammad Jahangirl. Used with permission.

OM: Was there a difference in terms of the freedom to experiment with different subjects?

MP: In the U.S., there is no limitation on subjects or their treatment. As an artist here I can work freely on any social or political subject.

In Iran, I am not free to make a statement that might be against [the government’s] political or social views, and censorship has a significant effect on artistic expression. For instance, part of my practice is making installation and performance art about environmental issues but I could not address such issues in the same way in Iran.

For my Earth Vessel project I addressed Iran’s Lake Urmia crisis, and after working with scientists, discovered the same phenomenon is happening in the U.S.’s Salt Lake in Utah. I wanted to make a series visualizing these two lakes together as scientists call them “twins.” Due to censorship constraints in Iran, I showed only the Lake Urmia component of this project but I had wanted to present both together, creating a bridge between the two cultures with what is happening to the two lakes.

Working on environmental issues, like water scarcity, is a red line for artists (and also activists) in Iran. Drought is considered a national security issue in the country, and it is a sensitive issue as experts blame the authorities for mismanagement of the country’s water resources.

OM: The art community—galleries, collectors and art schools—in the West, especially the U.S., often views artists from the Middle East (including Iran) through a stereotypical lens. Have you experienced this?

MP: In the U.S. art community, especially among curators and gallery owners, I am seen as an artist born and raised in a particular geography and culture and I am expected to create art that conforms to their stereotypes in subject and form. I am often asked to add elements of calligraphy, Islamic motifs, or political issues to my art practice. I don’t want this Western projection of me—or censorship from the Iranian side. I want to be seen as a visual artist and to express my art through any subject and in any form and to blur these boundaries. We need other non-Western artists to make art on universal subjects to break through these barriers. 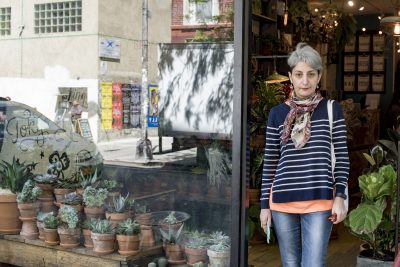 “I am seen as an artist born and raised in a particular geography and culture and I am expected to create art that conforms to their stereotypes in subject and form. I am often asked to add elements of calligraphy, Islamic motifs, or political issues to my art practice. I don’t want this Western projection of me—or censorship from the Iranian side. ” Image from Mohammad Jahangir. Used with permission.

OM: In your latest collection, Folded Mystery, none of these cultural elements are present. It’s abstract, interpretive, and enigmatic. But are these characteristics still connected to a perception of the art that comes from the East?

MP: Well, there is no doubt that my sociocultural context shaped my visual memory and affected my art practice. In the Folded Mystery project, I have tried to go beyond the Eastern art clichés, using a dynamic combination of materials, methods, concepts and subjects that challenge traditional boundaries and defy easy definition.

Folded Mystery embodies the complexity of simplicity and points out that perception can widen our perspective through displacement. Moreover, through cross-fertilization of drawing, sculpture and photography, Folded Mystery stimulates a questioning of vision and perception. I believe that critical thinking is deeply rooted in Eastern art and culture.

OM: How is the issue of identity reflected in your work?

MP: Before moving to the U.S., I made a piece titled Identity while doing a residency in south France. In 2015, I criticized the idea of national identity versus universal identity through this 3-dimensional installation. I am committed to the idea of being global citizenship, having rights and civic responsibilities that come with being a member of the world, with a whole-world philosophy and sensibilities, rather than as a citizen of a particular nation or place. 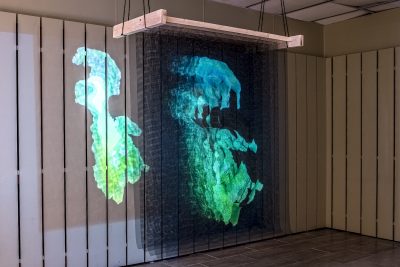 Earth-vessels, a piece from the new Folded Mystery collection. Image provided by Palizgir.

OM: Can you describe for us the current art scene in Iran?

MP: The Iran art scene has grown in the past decade. Many professional art galleries have opened in Tehran, with emerging and established artists getting involved with monographic or experimental shows, artist talks and art events every month. Also, artist residency programs are being established, as well as art and cultural exchange programs to help young artists experiment outside the country. For me, it was a turning point in my art when I attended the Cornelius Arts Foundation residency program in France in 2014. Iran is not accurately portrayed in the media, and there is a lot happening that doesn’t get seen outside the country.