Australian conference debates threats to human rights in the Asia-Pacific 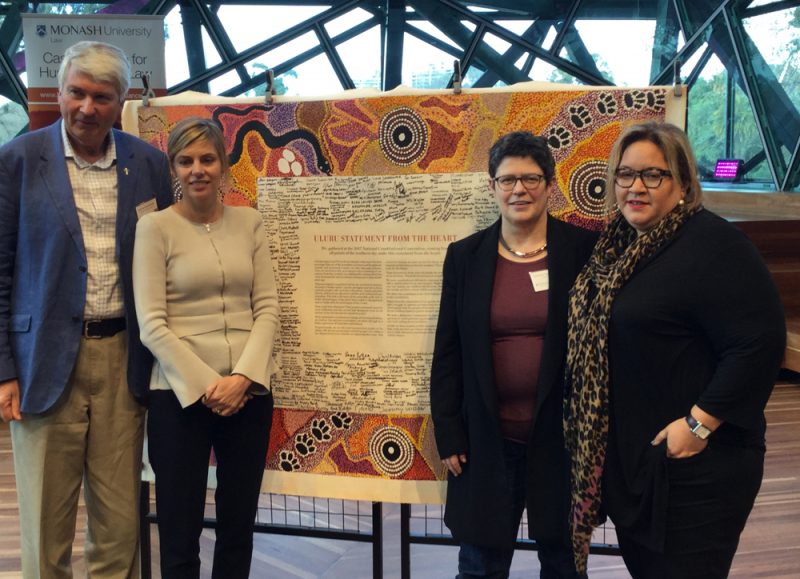 The theme of the 2018 human rights law conference of Monash University’s Castan Centre, in Melbourne, Australia, was best summed up by Kristen Hilton, Equal Opportunity and Human Rights Commissioner of the state of Victoria: “We cannot just support human rights until it gets hard”.

She was talking about the 2017 controversy over youth detention in adult prison. Anti-discrimination lawyer and member of the Fair Agenda board, Kamna Muddagouni tweeted:

Human rights and policy around human rights doesn't led itself to a five second media grab, it requires time, thought and reflection, not just a legal answer, but an answer thinking about morality, ethics, religion, philosophy as well – @kristenahilton @VEOHRC #HumanRights18

At a time when rights are embattled both locally and globally, the annual event in Melbourne explored many of the topical issues facing both Australia and countries in the region.

Jesuit Catholic priest Father Frank Brennan spoke about religion and rights. He is a member of the expert panel set up by the Federal government to examine the question of religious freedom, following the legalization of same sex marriage in Australia in 2017.

Frank had advocated a vote in favor of equal marriage during a national survey.

In his presentation, he argued that national human rights legislation would help to clarify religious rights, but doubted that would happen:

Professor Megan Davis looked at the state of indigenous rights and reconciliation following the government’s rejection of “The Uluru Statement from the heart”. The 2017 statement by the First Nations Convention called “for the establishment of a First Nations Voice enshrined in the Constitution’ and a process for agreement-making with governments and ‘truth-telling’ about Aboriginal and Torres Strait Islander history”.

Her message was clear:

You can’t do RECONCILIATION without doing TRUTH first – @mdavisqlder at #HumanRights18 on #UluruStatement pic.twitter.com/XylpAjxxRg

The issue of treaties is always contentious in Australia. But Megan brought some humour:

Activist Habiburahman did not hold back in his demands for strong action on the Rohingya crisis in Myanmar:

Habiburahman giving us a pretty brutal insight into the genocide against #Rohingya in Rakine state. #Humanrights18

Human rights lawyer George Newhouse from the National Justice Project gave an equally depressing picture of the treatment of asylum seekers held in the Manus Island and the Nauru offshore detention centres:

@GeorgeNewhouse says offshore detention is inhumane and destructive and that the government is destroying people's lives for political gain. #HumanRights18

In contrast, Ivy Josiah was more optimistic about recent developments in her country in her presentation “You Can't Beat A Woman – Women's Human Rights in Malaysia”:

.@ivyjosiah – there's nothing more powerful than women when they work together. #humanrights18

Proposal from @ivyjosiah of a global strike for women -“no sex, no work until the violence minimises” – met with a round of applause. She says “watch this space”. 👏👏👏 #HumanRights18

Author Tara Moss reflected on the current state of the #metoo movement:

Backlash against #Metoomovement is real. How do we deal with it? @Tara_Moss sees a lot of this online. But hopefully it will pass… @CastanCentre #Humanrights18

Kathryn Louise shared her own enthusiasm during the panel Q&A:

Feeling inspired after listening to the #MeToo panel @Tara_Moss & Ivy Josiah at #HumanRights18 There's definitely hope for change. We'll get there. pic.twitter.com/dVkTtdwYNE

Employment lawyer Josh Bornstein painted a bleaker picture for worker’s rights in Australia in his “Requiem for the right to strike”. He covered a lot of ground, including quite a bit of history:

.@JoshBBornstein – when Mandela came to Australia in 1990, he praised two organisations – Waterside Workers Union and the Seamens Federation, who were the first to boycott #apartheid #humanrights18

The final presenter was the CEO of Greenpeace Australia Pacific David Ritter, who gave a rousing appeal to join the opposition to Adani’s proposed Carmichael coal mine in the Queensland Galilee Basin. It’s part of their Coal-free future campaign:

.@David_Ritter – If you care about the future of our planet, please join our crew to stop atrocities like the opening of the Galilee basin. We were able to use the common law so well in #Mabo. We can do it again. #humanrights18

Got so caught up in the last two brilliant talks I forgot to tweet. No jobs on a dead planet. #StopAdani #HumanRights18 @CastanEvents @David_Ritter https://t.co/fn1yR0l2Z9

Lawyers from Victoria Legal Aid have shared their impressions of the day on their website. Sam Drummond, whose tweet is included above, reflected on Ivy Josiah's contribution:

‘I’ve spent much of the last year in Malaysia working with human rights organisations, so it was terrific to hear from Malaysian women’s rights activist Ivy Josiah.

‘The conversation about human rights in Malaysia is completely different to the one we are used to hearing, and there are clearly lessons we can take from each other.

‘Ivy stressed the importance of taking risks and impressed on us the ‘need to hold hands with our fellow human rights groups’.

Videos of the panel presentations and Q&A sessions should be available soon on the Castan Centre YouTube channel. There is also a series of videos Have You Got That Right? that explores a wide range of topics.

The author attended the event as a media representative on behalf of Global Voices. Members of the GV community have been guest speakers at previous conferences, namely Sami Ben Gharbia and Jillian York. The author's Twitter Moment of the conference can be viewed here.