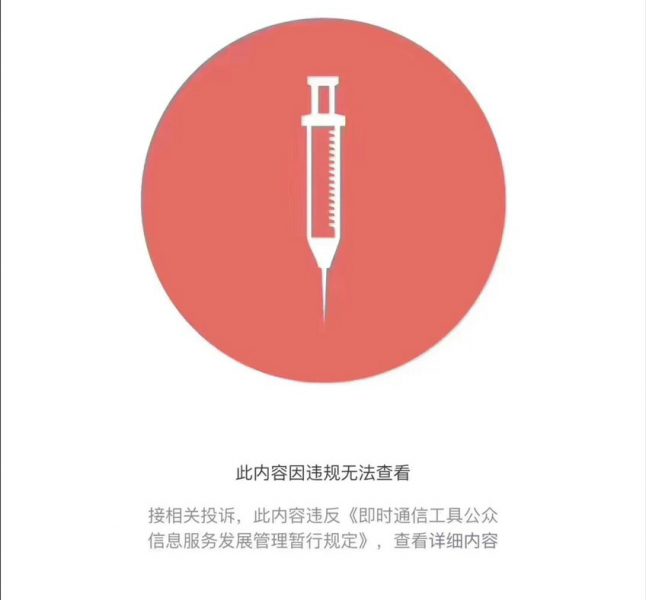 Chinese netizen turned the exclamation mark in the content take down notice into vaccine needle. Image from Twitterer Xiucai1911

Chinese citizens are outraged over revelations that a major drug company was supplying low-quality vaccines, the latest in a decade-long series of scandals to have plagued China's pharmaceutical companies.

The drug watchdog of the Jilin province announced on July 18 that the company Changchun Changsheng Bio-technology has sold over 252,600 sub-standard DPT (diphtheria, whooping cough, and tetanus) vaccines to Shandong Centre for Disease Control and Prevention, the agency in charge of public health in a province of about 100 million people.

It is unclear how many children have been given the low-quality DPT vaccines, but authorities have said that, although ineffective, the shots will not cause harm. However, a number of parents told a Hong Kong based media outlet that their children suffered from adverse effects after taking the vaccines.

Only three days prior, the same company had been found to have forged data of its rabies vaccines, prompting the China’s Food and Drug Administration authority to suspend production. The watchdog's investigation was triggered by a report submitted to the Administration by a senior staff of the bio-technology company.

Changchun Changsheng Bio-technology was fined in RMB 3.44 million [500,000 USD] over the DPT vaccines, a small sum for a company that reported 566 million RMB in net profits last year. It also received 48.3 million yuan in government subsidies in 2017, according to its annual report.

A decade of scandals

For over a decade, a series of similar scandals have plagued China's emerging pharmaceutical industry. While the government vowed that it would conduct a throughout investigation on the incident this time, people seem to have lost faith, and understandably so.

In 2007, at least 78 children developed brain, bone, and joint inflammation after taking vaccines in Shanxi province supplied by a Beijing-based company. Four children have died as a result of the diseases.

Working with a whistleblower, a 2010 China Economic Times’ investigative report on the incident revealed that Shanxi officials had collaborated with the supplier in order to permit the low-quality vaccines to be given to local children. Two reporters and the newspaper's editor were sacked after the story's publication.

In 2013, at least 10 infants died within six months after taking Hepatitis B vaccines, the majority of which were manufactured by Shenzhen Kangtai Biological Preparations Company. China's Food and Drug Administration had ordered Kangtai to suspend distribution of such vaccines, but investigations were soon stifled after local medical experts testified that the deaths were random and the vaccines were up to standard.

In 2016, nine drug companies were accused of distributing millions of expired vaccines all across China. The investigation eventually led to the sentencing of 137 people, including 64 officials on corruption and forgery charges.

Following the July 18 episode, netizens are now sharing tips for getting their children vaccinated outside the country. Many are leaving comments on the U.S embassy’s official social media accounts on Weibo asking the U.S government to offer assistance to Chinese people.

Uromayutori’s tweet has summed up public sentiment around the incident:

The corporate has occupied one fourth of total market share and it forged manufacturing record for their rabies and DPT vaccines. Upon investigation, it was fined RMB 3 millions; [earlier on a private hospital] imported high quality overseas vaccines, the person in charge was sentenced to 7-year-imprisonment with a RMB 2 million fine. Parents of children who suffered from brain damage after vaccination were sentenced to two-year-imprisonment for picking quarrels. Government officials who stepped down after the melamine infant formula scandal now is leader of Food and Drug Administration and this authority claimed that it had established a perfect drug monitor mechanism. Everything sucks here.

Since the latest revelations with Changsheng Bio-tech, many netizens kept sharing online adverse effect after being vaccinated and, as it's already customary, censors started deleting posts:

“Report to leaders, we have solved the fake vaccine problem!
This is great! How did you solve the problem?
We have deleted all the related discussion!”

Qi Jing, whose 3-year-old child had also received the sub-standard vaccines, set up a chat support group for vaccine victims in Chongqing area, was briefly detained. He wrote on Twitter on 23 of July:

Just returned from the police station, now I am free. Quite a number of authorities, including the police called me. They told me that vaccine victims were allowed to exist but [that] we have to use legal and reasonable means — we could not blame the Party and the government, we could [only] open fire at the manufacturers for the sub-standard vaccines. You know what it means. Actually, their kids also received vaccines, how could they not support the initiative.

Quite a number of Qi Jing’s posts on Twitter were deleted by a third party, including the above one, the Twitterer reported on the next day.