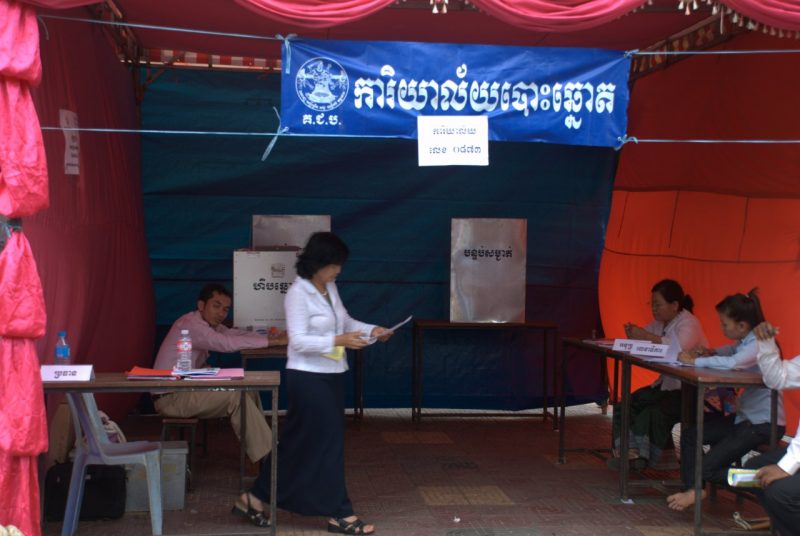 Cambodia’s exiled opposition leaders have launched the ‘clean finger’ campaign which calls for a boycott of the general election scheduled on July 29, 2018.

Typically, an indelible ink is placed on the finger of voters on election day which means those who fail to vote, have a clean finger.

Cambodia National Rescue Party (CNRP), the main opposition party, was disbanded by the Supreme Court on November 2017 after the ruling party accused it of conspiring with foreign powers in an attempt to topple the government of Prime Minister Hun Sen.

CNRP leader Kem Sokha was arrested and continues to remain under detention in the country while the party’s other top leaders were forced to flee the country to avoid prosecution. CNRP members in parliament were removed from office and banned from holding public office for five years.

CNRP got a significant share of votes in the 2013 general election and in the 2017 local council election. The CNRP's dissolution will most likely allow Hun Sen’s party to beat smaller parties which have been accredited to participate in the coming election. Hun Sen and the ruling party have been in power since 1985.

Aside from removing the main opposition, the ruling Cambodian People's Party (CPP) is also accused of undermining the press in recent months.

Dozens of radio stations that broadcast programs that criticize government policies were forced to cease operations after they were suddenly slapped with hefty tax cases. A similar tax issue also forced the Cambodia Daily newspaper to stop operating.

The crackdown on the opposition and the press led many analysts to conclude that Cambodia may conduct a sham election on July 29.

1/3 The 19 minuscule parties pretending to compete with the CPP should have no illusion: Suppose that, ten years from now, one of them grew to become big enough to threaten the CPP, Hun Sen would dissolve it, just like he dissolved the CNRP last year. #SamRainsy #Cambodia pic.twitter.com/okYCXpjv1l

The ‘clean finger’ campaign is widely promoted by CNRP members and supporters in and out of the country:

Meanwhile, the CPP countered this by reminding citizens to vote for peace, stability, and development. It also urged its members to post social media photos affirming their patriotic duty to vote on election day:

#CPP is everywhere in Cambodia and in abraod. CPP has close to 6 million members and they will go to vote on 29 July 2018. We vote for #Peace and #Development, not stay home to serve the interest of national traitors and its oreigner bosses. #ElectionsKH #Cambodia #Democracy pic.twitter.com/0eVKZMQOis

But CPP members are not content with launching their own online campaign reminding citizens to vote on July 29. They threatened to file charges against individuals and CNRP members who are behind the boycott campaign.

CNRP responded by arguing that there’s no law which prohibits citizens from refusing to vote.

The United Nations’ Special Rapporteur to Cambodia Rhona Smith also released a statement urging the government to respect the decision of voters who plan to boycott the election:

I welcome recent Government calls to local authorities to avoid discrimination during the campaign and encourage the Government to condemn in very clear terms voter intimidation and to clarify that calling for a boycott in a non-compulsory vote is permitted.

CNRP is calling for the postponement of the election while demanding the release of Kem Sokha, the reinstatement of the opposition party, and the reversal of laws and regulations that restrict free speech.