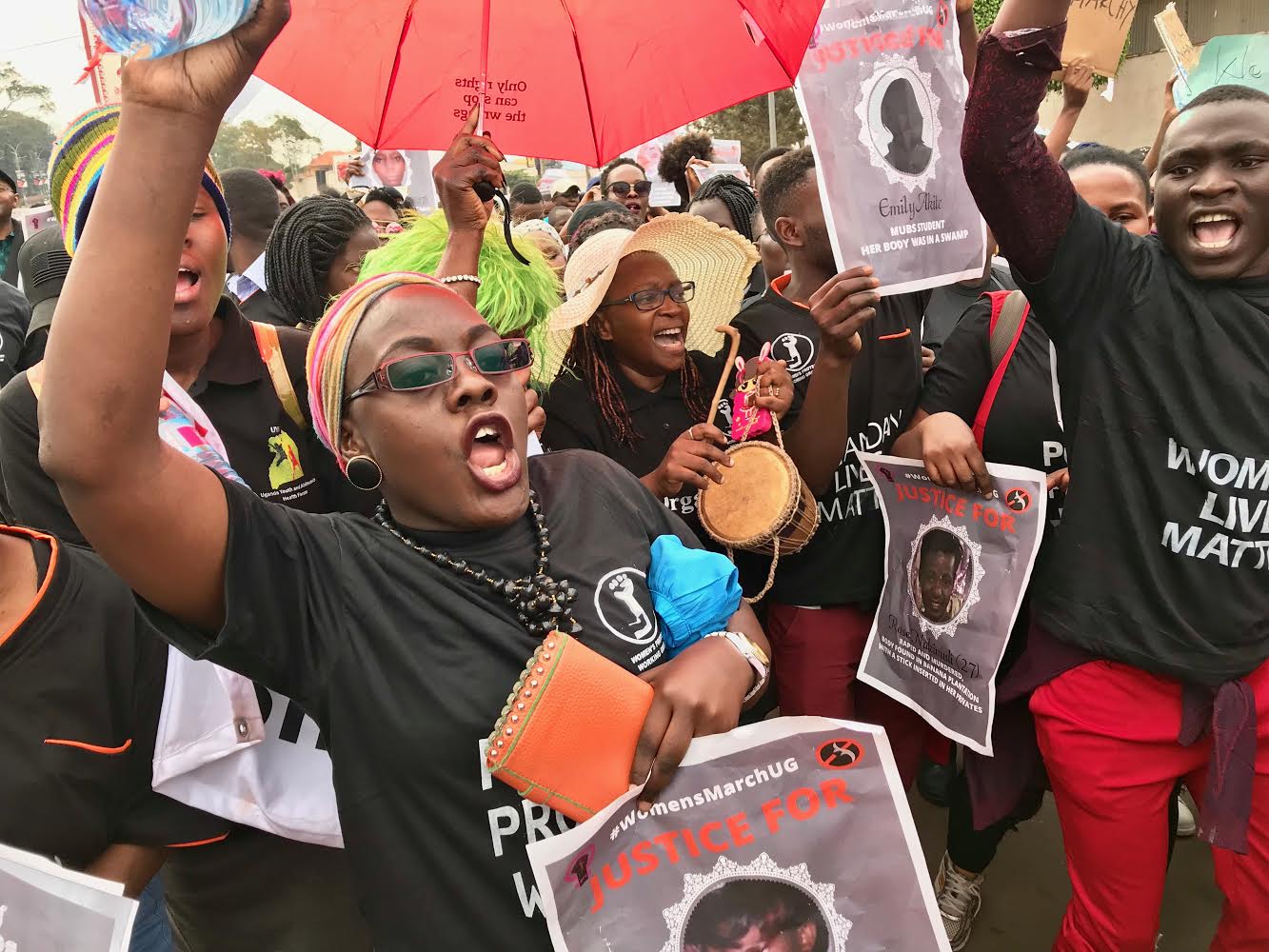 Women marching in Kampala, Uganda on June 30 to protest the rampant kidnapping, rape, and killings of women that have gripped Uganda in the past few months. Photo by Michael O'Hagan used with permission.

Ugandan member of parliament Sylvia Rwabwogo had just emerged from a months-long nightmare during which she received daily text messages and calls from a stranger, professing his love to her.

When a magistrate court in Kampala, Uganda handed down a two-year prison sentence to 25-year-old Brian Isiko on charges of cyber harassment and offensive communication, the MP thought she could finally find some peace.

But her torment continued when some Ugandan citizens lashed out against the ruling, saying it was “too harsh”. Local mainstream media minimized the seriousness of the case by avoiding the word “harassment” in headlines, suggesting instead that Isiko had been convicted for sending love messages. 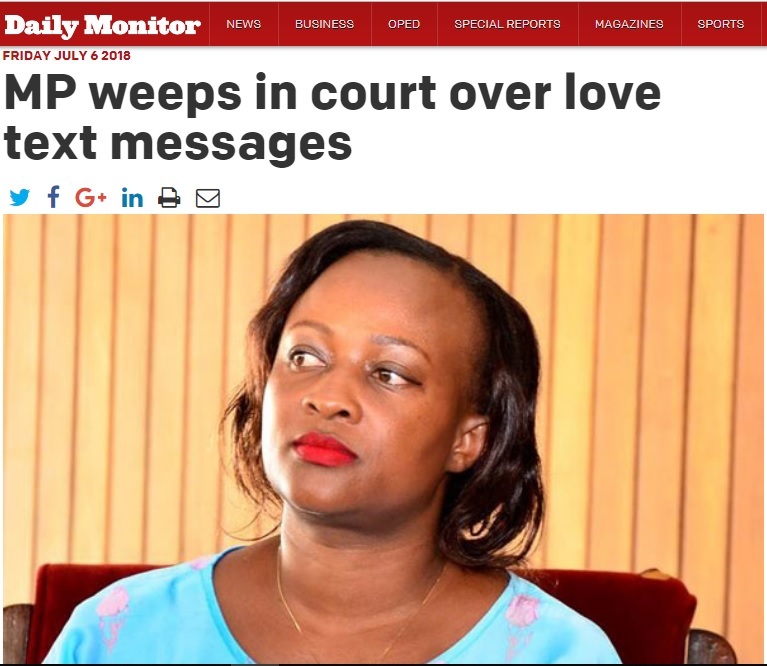 The harassment started in December 2017, coinciding with a politically sensitive period when President Yoweri Museveni deployed all means to eliminate the presidential age limit clause from the constitution, giving way for a possible life presidency.

Rwabwogo, who represents the western district of Kabarole near the Uganda-Democratic Republic of Congo border, was among a few parliamentarians from Museveni's ruling party who rejected the proposal to lift the age limit.

Around this time, Rwabwogo started getting calls and messages from Isiko. In his calls, Isiko would comment on Rwabwogo's clothing and told her that he was worried about her and wanted to protect her.

One of the dozens of messages to the MP read:

I love you so much and want to protect you. My love is for you alone and since there is no one taking care of you, I will do it.

Feeling threatened, and with the June 8 murder of MP Ibrahim Abiriga [1] fanning fears around parliamentarians’ overall security, she felt she could no longer remain silent.

On June 11, Rwabwogo set up a meeting for the first time with Isiko and, with police in the loop, he was arrested. By July 5, Isiko pleaded guilty in court to the charges of cyber harassment and offensive communication, under the Computer Misuse Act of 2011 [2]. He was sentenced to two years in prison.

In their coverage of the case, many Ugandan media outlets refused to highlight the specific charges and the content of the messages. Instead, Isiko was described as a poor student whom the MP should have guided. Other times, the media referred to Isiko as a “boy”, despite him being in his mid-twenties.

Commentary online included disparaging attacks on Rwabwogo as a person, focusing on her status as a single woman and the fact that she was open about her marital status in a May 2017 interview with New Vision [3], a leading newspaper. Rwabwogo lost her husband in 2012 and is a mother of three.

The media coverage and online reactions prompted a counter-backlash by Ugandan women under the hashtag #HarassmentIsNotLove. [4] Rwabwogo also spoke of how these attacks have affected not just her but her family too during a Twitter chat on July 13 hosted by Global Voices’ Rosebell Kagumire (this story's author).

During the chat, Twitter user Hazel Mwebesa echoed a quote from Rwabwogo concerning her safety now that Isiko was in jail:

“Do I feel safer now that he is in jail? No, it has got worse because I'm afraid. Everyone is looking into my life. I'm afraid that people might rally up against me because of how the case has been reported by the media.” Mp Rwabogo #HarassmentIsNotLove [5]

Twitter user Kweeta commented on the use of the word “boy” to describe the 25-year-old perpetrator:

Selective language condones sexual harassment, the media needs to better. Using words like "boy" to refer to an adult man, "Too much love" to mean harassment only promotes these vices. How media frames these issues sets a tone on how they will be perceived. #HarassmentIsNotLove [5]

In an interview with Black, No Sugar [8], a YouTube-based outlet, Rwabwogo says:

Even after the ruling, people lashed out at me, sending messages on Facebook. I am stronger and this is not the first time I have suffered this kind of media framing.

This morning let's discuss Hon. Sylvia Rwabogo, the Woman MP for Kabarole in Uganda, and victim of stalker Brian Isiko, a 25 year old YMCA Jinja Branch student. Let's look at this through a media lens: who is speaking/or not, what they are saying/and not. /Thread

In her ruling, magistrate Gladys Kamasanyu was emphatic that society has groomed men to demean and disrespect women. Even in the dock, Isiko was laughing as Rwabwogo broke down in tears. 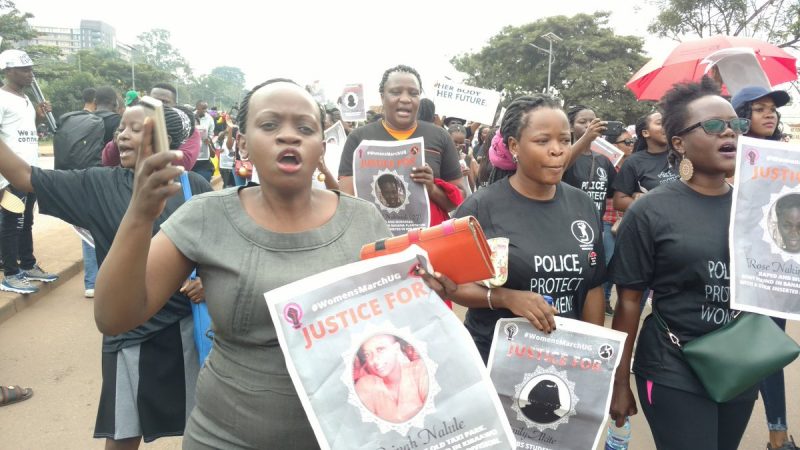 Earlier, Isiko's family had reached out to the MP to ask for forgiveness but she says it was a matter of her security and forgiveness would not guarantee safety. She went ahead with the case.

Meanwhile, a law firm owned by parliamentarian Abdul Katuntu has sought to appeal Isiko's sentence and applied for his bail.

What the backlash says about violence against women in Uganda

Rwabwogo's status as an MP proved to many activists that no matter how much power a woman holds in Uganda, society still expects her to endure the unwanted male gaze and intrusions of privacy.

A 2016 Inter-Parliamentary Union study on sexism, harassment, and violence against women in parliament revealed:

[The] phenomenon knows no boundaries and exists to different degrees in every country, affecting a significant number of women parliamentarians.

While violence is often meted out in women's private spaces, the internet and new technologies have enabled abusers to reach women in the digital realm, as in the case of Isiko. Jac sm Kee of the Association for Progressive Communications (APC) explains:

Online violence against women is an overt expression of the gender discrimination and inequality that exists offline. Online, it becomes amplified.

Victims continue to under-report cyber harassment [10] because of the shame and stigma experienced after speaking out in public. Forty-one percent of technology-based violence against women cases reported to authorities have been investigated, according to a study by APC in seven countries.

Rwabongo's case takes place only weeks after women had staged a protest in the streets of Kampala against the rampant kidnappings and murders of women in the country (over the past 18 months, more than 43 women [12] are known to have been kidnapped, raped and killed in Uganda).

Netizens pointed out the need for education around sexual harassment in all forms:

Sexual harassment can be broadly defined as “unwelcome sexual advances, request for sexual favours or unwanted physical, verbal or non-verbal conduct of a sexual nature” #HarassmentIsNotLove [5]

Rwabwogo's case moved Esther Kalenzi, a well-known Ugandan youth social entrepreneur and founder of 40 Days over 40 Smiles Foundation, to share her own experience of sexual harassment using #MeToo to support Rwabwogo and other women struggling in silence.

Kalenzi's Twitter thread has been shared over 200 times, proving that sections of Ugandan society are willing to interrogate the impunity that often underlies sexual harassment as well as support victims who speak out.

On #HarassmentIsNotLove [5]
I don't even know where to start.
It is a deeply personal, emotional story for me🤐
Sigh

I was stalked by someone for about 4 years. He was my friend before but when I declined his ‘romantic advances,’ he became something else.

Rwabwogo's ruling, together with the conversation it sparked, set a new precedence in Uganda society, where women are increasingly rising up and speaking out [15] against sexual harassment and violence.