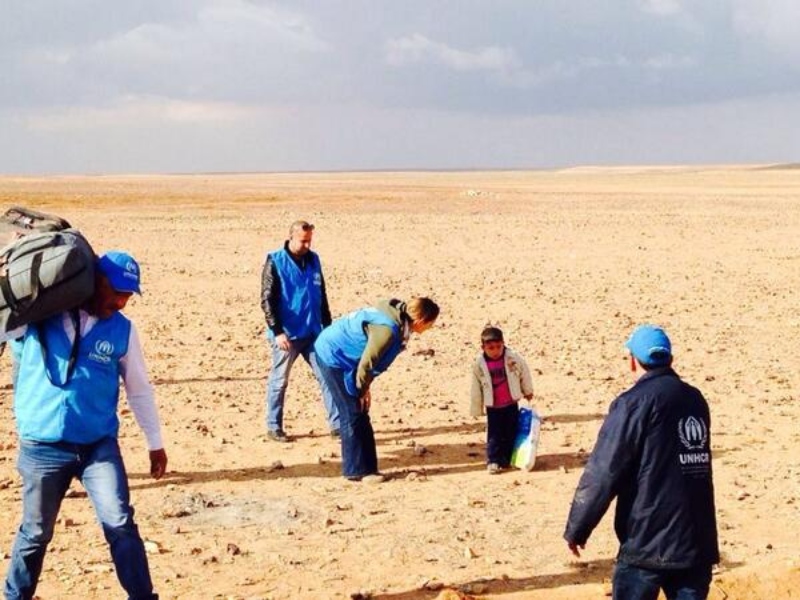 4-year-old Marwan, temporarily separated from his family in Syria, is assisted by UNHCR staff to cross to Jordan. Released to the media via Twitter.

As of early July 2018, the Syrian government continues to engage in an offensive on “remaining rebel pockets in southern Syria” according to the Arab Weekly. Intensive aerial strikes on the city of Daraa have been launched in an attempt to wipe out remaining rebel forces. At least 270,000 Syrians have fled air and ground attacks over the last two weeks, according to the United Nations.

The Syrian war has displaced more than half of Syria's population over its course, with the latest events in Daraa displacing over 300,000 Syrians in just two weeks. Neighboring Jordan has accepted over 1.3 million refugees over the past seven years, but recent protests in the country that led to the resignation of the previous government have resulted in the new government’s refusal to keep their borders open.

However, closed borders have not stopped Jordanians from lending a hand to Syrians.

Local non-governmental organizations (NGOs) in the capital city of Amman are asking citizens for assistance to alleviate the harsh conditions experienced by displaced Syrians near the border town of Al-Ramtha in Jordan. While some NGOs existed before the crisis in Syria began, others were created just recently to address the influx of an estimated 40,000 displaced Syrians at the border.

For example, the NGO Eghathet Al-Malhoof (meaning “Helping Those in Need” in Arabic) partnered with the Jordan Environmental Committee to collect and distribute donations along the border. Similarly, the Masar Initiative joined efforts with the UNHCR and other international NGOs that received permission to carry out relief activities with the same purpose.

The NGOs have distributed fliers, contacted government officials, and shared posts via social media to call for help of all kinds, including volunteer recruitment and donations collection. The fliers include advice on edible food donations, requesting donations of canned food, bread, water and bottled drinks. The groups have also put out a call for medicine, health and sanitary supplies, tents, and baby essentials. Cash donations are accepted, but the NGOs prefer physical donations to avoid the complications of handling cash.

Osama Hajjaj, a member of Masar initiative, told Global Voices (GV) that volunteers are needed and those who cannot devote entire days come after work to assist. Masar director Mohammed Al Garalleh explained to GV that he is very pleased with the amount of help received so far and adds that reactions on social media were immediate and responsive. Garalleh also states that the Jordanian army is handling the distribution of donations and that his organization will not turn away anyone who offers to help.

According to Eyad Al Jazzazeh, head of Eghathet Al Malhoof, they have received a profusion of donations from individuals, organizations, private companies, and businesses.

Over 250 doctors, nurses, and medical units have volunteered and are camping out at Al-Ramtha to help anyone who seeks medical attention, in addition to ensuring that no contagious diseases or viruses spread among displaced Syrians at the border. Some patients have been admitted to Jordanian public hospitals.

In addition to the outpouring of tangible help, two trending Twitter hashtags, #open_the_borders and #we’ll_share_our_bread_in_half, have added to the mobilization for aid and support. While Jordan struggles with its own challenges, many Jordanians think the displaced Syrians should be admitted into the country according to recent citizen responses on Twitter:

This is the largest displacement in the Syrian war. People lack the bare necessities for survival.

Write about #Daraa.
Talk about Daraa.

Urge #Jordan to #OpenBorders to the people and to humanitarian aid ?? #افتحوا_الحدودhttps://t.co/FOxtq01gWj

From Idlib to Texas: “In solidarity with children in detention at the US border. Our hearts are with you.” pic.twitter.com/ApKvNWNQHV

“Thousands of innocent lives are going to be lost, once again, if urgent action is not taken.”

The United Nations (UN) has urged Jordan to open up their borders, warning that displaced Syrians near the border have no other option and their lives are at stake. However, Jordan remains obstinate regarding its decision to keep the borders closed, telling the UN to provide security within Syria.

Just a month before the strikes, Jordan announced that it cannot accept any more refugees.

ِRecent peaceful protests in May 2018, organized by unions over a new income tax law, triggered Jordanians to speak out on other grievances, including the burden of refugees. This resulted in the resignation of the government as a whole and the new government has grown very careful about issues concerning refugees, as some people tried to blame the country's woes on them.

The current government feels “no obligation” to open the borders, given that the support for the response refugee plan (a strategic partnership plan between Jordan and the international community) stands at a disappointing 7 percent this year, in contrast to the 65 percent in 2017.

Key supporters of Syria's administration include Russia and Iran, while the United States, Turkey and Saudi Arabia all back government rebels. However, the U.S. and other rebel allies have reportedly abandoned them and are no longer sending them help.

Through their embassy in Amman, Jordan, the U.S. sent a message to the south’s rebels telling them they should not count on any American firepower.

Rebels now find themselves alone without help, and civilians are torn between going back to cities under strike where death is guaranteed or waiting on Israel and Jordan's borders.