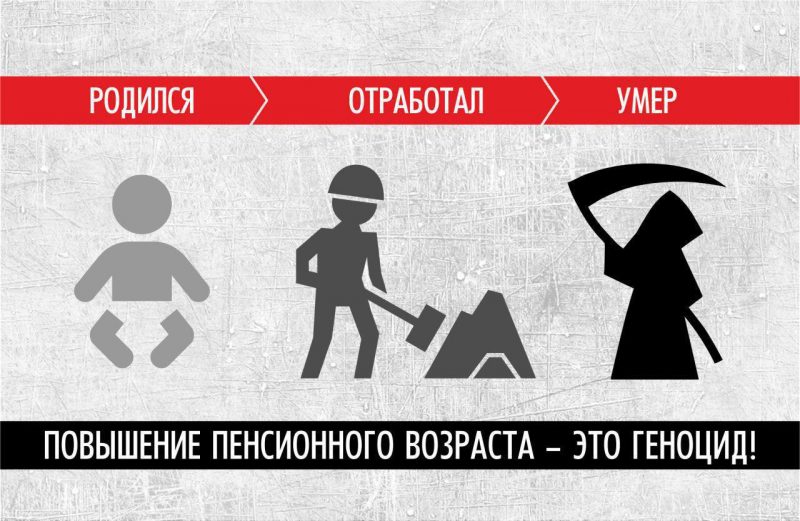 The 2018 World Cup in Russia has ended, and presumably, so too have increased security measures. Aside from limitations on alcohol sales and vehicle traffic, any form of public protest was swiftly met with detention, as shown when even lone picketers were arrested.

With the official end of limitations on public gatherings, a potential wave of protest activity threatens to follow: the Russian government, hoping to avoid mass demonstrations, announced its plans to raise the pension age at the very outset of the World Cup. The maneuver failed to go unnoticed by the online crowds:

Football is just a ball, a game. Pensions and taxes are our life. While you're playing with the ball, the thief is emptying your pockets… Keep playing the ball.

Judging by the swift outrage and condemnation from across the Russian political spectrum and population, these measures did little to contain the upsurge of protest activity; almost 100 actions were planned before the end of the World Cup. The Russian government now has little at its disposal to keep protestors off the streets.

There is power in a union

With low life expectancy for Russian women and even lower for Russian men, raising the retirement age to 63 for women and 65 for men, up from the current 55 and 60, was bound to aggravate people.

The most imminent and serious challenge is from the Russian Federation of Labor, an alliance of labor unions. Within days of the June announcement on pension age reform, they launched a petition calling on the government to scrap its plans. At the time of writing, upwards of 2,769,000 had signed.

Not limiting itself to online activism, the Federation also announced plans to hold protests all across the country and in Moscow after the World Cup. The Federation’s vice president announced this on Facebook, writing:

There’ll be a procession and a protest in Moscow on July 18th. The date wasn’t chosen by accident: the World Cup ends on July 15th, and the Duma won’t discuss the reform project any earlier than the 19th and no later than the 26th.

The Federation applied for protest permits in over 50 regions, with various dates being chosen based on what local organizers decided.

Together we will stand?

Other groups and political parties have also been organizing their own responses, independent of the Federation’s plans.  The leader of the Communist Party of the Russian Federation announced his plans to initiate a referendum on the question of raising the pension age. With a large base of elderly pensioners and their commitments to improving social conditions being tested, the Communists have been rocked from their slumber into action. A regional parliamentary deputy from the party didn’t mince words at a recent session, saying:

This law doesn’t give people the right to work, it compels them to work. To the grave. They say that the country doesn’t have money, but that’s a lie! We have a bunch of money invested in the American economy. The oligarchs get half of the oil money. They need trillions of rubles for the Yarovavya Packet. What, we don’t have anything better to do than to waste money monitoring our citizens? 700 billion spent on soccer to put on a good show. If we had beaten Croatia, I promise you, they would have reinstituted serfdom here.

The police showed up at his house shortly afterwards to investigate him for extremism.

Other left wing groups have joined the party in its referendum and protest efforts, like the Left Front, a non-partisan activist organization that has been trying to secure permits all throughout the World Cup. They have been particularly unsuccessful in one region, where they are continually denied a permit, a story that has repeated across the country for other groups.

Demonstrating that this is not just a left-wing issue, Alexei Navalny, the ubiquitous Russian opposition figure, was also disturbed by pension reform plans. Calling these plans a “clear-cut crime against the people” announced his own plans for protests, which happened in various cities earlier this month on July 1st.  Even the right-wing Liberal Democratic Party and the Russian libertarians have been organizing protests. These protests are also varied in time. Rather than all the opposition groups uniting on one date for a massive showing, they opted to work these plans independent of one another.  Sean Guillory, Russia watcher and host of the Sean’s Russia Blog podcast, lamented these disparate plans:

So this how the opposition is addressing pension reform-dueling protests: Navalny July 1; Yabloko July 3; Left Front July 4 and the only org with working people as a constituency Labor Federation July 18. That’s solidarity for you. https://t.co/nijPC52s0u

Nevertheless, the fact that so many groups are willing to take to the streets demonstrates the sheer unpopularity of the proposed measure. In the face of such outcry, it was initially reported that the Kremlin was going to “soften” its intended reforms, but the Duma leader for United Russia, the ruling party, recently put an end to this talk, saying the party was not going to discuss any tweaks to the proposed measures.

The Russian government took a multi-pronged approach to convincing people of the necessity of raising the pension age. It used the World Cup to “distract” from the proposed reforms, followed in the list of state media's priorities by reports extolling the wonders of longevity and late-age employment.

Dmitry Kiselyov, a TV host, claimed on his evening show “News of the Week” that Russian men have only themselves to blame for not living long enough to see the retirement age. “An early death originates from mistakes made in life”, he said.
Guys, don't make the mistake — don't die…

In addition to more traditional propaganda efforts, the Russian authorities are widely using their online capabilities. Some social media users found ads to material promoting the value of raising the pension age, accompanied by stock images of smiling senior citizens. Others noticed an uptick in accounts on TJournal, a link-aggregator, reposting an article aimed at showing opposition figures to be hypocrites. The article used out-of-context quotes to show that these figures previously supported pension reform and are now only speaking out because the government has decided to carry it through.

While the article was later debunked, these accounts continued to repost it, and some digital sleuthing showed that these accounts were sock-puppets registered the day the article was published, or else long-dormant accounts that had suddenly “reawakened” just to share the news. Those freshly-registered accounts all originated from the same IP-address and all paid for premium access to TJournal from the same source.

No matter how many bots are deployed or politicians dismiss concerns, it’s clear that the Russian government will have a fight on its hands as it tries to raise the pension age. With even established political parties drawing a line in the sand and taking to the streets as Russian unions promise mass demonstrations, it is a welcome sight of life in an otherwise moribund political system, where opposition parties often talk more than they act.